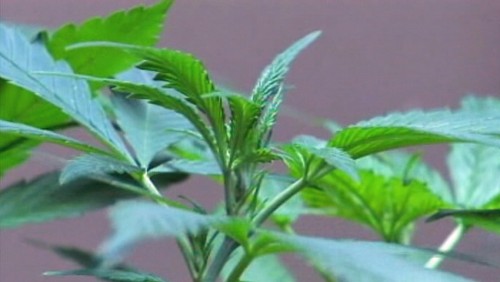 Despite banning the sale, growing and processing of legal marijuana, the Yakima City Council is seeking tax money from the upcoming pot industry.

The Yakima Herald-Republic reports the city council voted unanimously Friday to seek state tax revenue raised by businesses in cities that do allow legalized marijuana. Yakima joined a letter by the Association of Washington Cities asking the state to share recreational marijuana taxes with cities.

City staff and police argued that legalized marijuana from other parts of the state will strain public resources in the city.

Councilman Dave Ettl says the city’s position is not hypocritical.

Alison Holcomb, who led the initiative that legalized marijuana, says cities like Yakima contribute to public-safety problems by banning marijuana and pushing it into illegal activity. 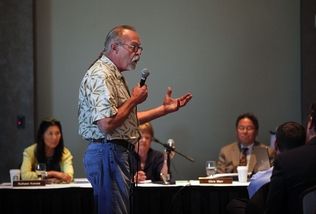 Dan Bates / The Herald At the Comcast Arena Conference Center on Tuesday, Jim Andersen, of Lynnwood, addresses concerns and asks questions regarding rules about Initiative 502. It was one in a series of public hearings by the Washington State Liquor Control Board .

Now officials are deciding how this new industry will be regulated.

At a public hearing on this Tuesday in Everett, some people asked how the state could have one system for medical marijuana and another system — with separate rules — for recreational marijuana.

And with recreational marijuana being taxed — and medical marijuana not — it could mean a steep difference in prices.

The new statewide system is expected to begin next year, legalizing recreational pot sales to adults. It will tax marijuana when it’s harvested, shipped to distributors and sold at state-licensed stores.

The concern is the taxes could make it more expensive than marijuana sold in medical dispensaries or in illegal street sales.

Sharon Foster heads the state’s Liquor Control Board, which is overseeing the enforcement of the state’s marijuana legalization. During Tuesday’s meeting, she acknowledged that it’s an issue that keeps getting raised as the state moves closer to legalization.

The Liquor Control Board is working with two other state agencies, the departments of health and revenue, to try to come up with recommendations to the Legislature on how to resolve the taxing issue, she said.

The hearing at a conference room at Comcast Arena on Tuesday is the first of five around the state to discuss the proposed rules. The state is scheduled in six weeks to begin accepting applications to grow, distribute or sell marijuana. Many questions remain to be resolved, as many of two dozen people who spoke at Tuesday’s hearing were eager to point out.

There were questions over how to find insurance, how marijuana entrepreneurs could legally bank their money, and what actions the federal government, with laws on the books making marijuana illegal, might take to legally challenge the state’s marijuana law.

“Anything we would say about federal law would be speculation,” Foster said, noting that the board is simply charged with implementing the new state law.

“There is a problem not having a clearer signal from the feds,” said Chris Marr, a member of the liquor control board.

Loren Simmonds, mayor pro-tem of Lynnwood, wondered if the city has to provide a license to operate a marijuana business if it didn’t meet the requirement to be at least 1,000 feet from schools and parks. Foster told him no.

Liquor board staff, recalling terminology used during Prohibition, said that the state initiative does not allow for “dry” areas, but the city can regulate marijuana through its zoning.

Jason Bess, from Lynn-wood, said he came to Tuesday’s hearing to get more information on the production, processing and licensing of marijuana businesses. He said he plans to start a business growing the crop.

“This is a new era for the country,” he said. “In five years, every single state will have marijuana.”

Matt Barron, from Everett, said that the state will decide how many marijuana licenses to approve, and who gets them.

“This is like a lottery,” he said. “Who’s lucky enough to get a license? I want to be prepared.”