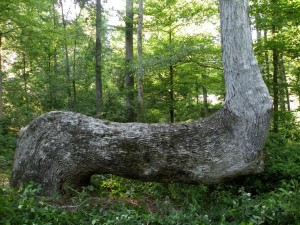 James Stewart
One of the Indian trail trees, the location of which are kept secret.

In 2002, a group of retired men began hiking together once a week in the Southern Appalachian Mountains and started finding old, scenic trails they claimed nobody knew about. They decided to revive these trails and make them available to the public, first forming a nonprofit group called Mountain Stewards, headed by president Don Wells.

Operating initially under an agreement with the Georgia Department of Natural Resources, the Mountain Stewards began work on their first trails in 2005. With the help of grants and private donations, the group has refurbished and interconnected more than 70 miles of hiking and water trails in Georgia, and constructed a number of bridges and canoe launch sites, providing safe outdoor recreation to the public and preserving the region’s cultural and historic beauty.

“It’s refreshing; you get out in nature. It’s like our own personal health-care program,” the 73-year-old Wells says by way of explaining what motivated this “trail crew of nine old men” to work two days a week, 46 weeks a year for about five hours a day.

During some of their hikes, the Mountain Stewards discovered something unexpected. “We started finding Indian trails that we could document from historical maps… and we were locating oddly shaped trees on these trails that had been bent by Indians,” Wells said, adding that Native Americans used these trees like ancient global positioning systems, to help them find their way to and from a particular destination.

Realizing they had stumbled upon living Native relics, the Mountain Stewards, in collaboration with Wild South, and people from five other states, started the Indian Trail Tree Project and Indian Trails Mapping Program that aimed to map Indian trails and document these amazing trail trees not only in Georgia, but all across the country, in the highly confidential National Trail Trees database that now includes 2,034 trees in 40 states.

Now known as the Indian Cultural Heritage Program, these trail-saving efforts have evolved into a book written by Wells and his wife, Diane. Mystery of the Trees, published in December 2011, caught the attention of Sam Proctor, an elder and culture consultant with the Muskogee (Creek) Nation in Okmulgee, Oklahoma, who had a dream about a particular bent tree more than a decade ago. “When I was visiting down in south Georgia, I dreamed that my ancestors showed me a trail they used back and forth from the village to the watering hole. They also showed me this oddly shaped tree and I never even thought anything about it until I saw Don Wells’s book,” Proctor said.

Wells knew the exact spot Proctor had seen in his dream, and on a visit hosted by the author and his wife, they found the bent tree and watering hole once used by the Muskogee (Creek) Indians. “It was a very spiritual experience,” Proctor recalled.

Since then, Wells has confirmed seven other Muskogee (Creek) trail sites in Georgia and Alabama, and is making plans with Proctor for future visits. Wells has also helped elders from a number of other tribes find their ancestral roots—literally.

ICTMN talked with Wells about the Indian trail trees. A documentary about them is also in the works.

What are Indian trail trees?
Back in the 1600s and 1700s, when Indians were traveling from the Atlantic to the Pacific, and from Canada to Mexico, there were trails all over the United States. They didn’t have GPS or a map, so to find their way from A to B and back home again, they had marker trees, or trail trees, or a signal tree or a yoke tree—they had all kinds of different names for them. These trees would be bent as saplings, when they were about ¾-inch in size, and tied down. They would be left that way for a year and lock into that position. They used them to mark trails, crossing points on streams, springs to find water and medicinal sites where they would get plants.

Are these trees sacred?
The Indians believe the trees are sacred, and one reason it was hard to find a lot of information about them is because Indians didn’t want the white folks to know about them. Because, like everything else we’ve touched, we destroyed. When Indians are standing near these trees, they believe their ancestors are there or nearby. Particularly the Ute Indians, who call their trees prayer trees. They think these trees are very sacred, so we treat them that way.

Does your book tell people where these trees are?
No, it does not. These trees are not protected by national preservation laws, so people can cut them down, damage them or do bad things to them. You can go to our website…and get a bigger picture, but all you know is that tree is somewhere within 1,000 square miles in a certain state. You will never be able to find it from the information that we show. People call us all the time and say, “Please tell us where this tree is, we want to go see it.” And I say, “No, I’m not going to tell you because I don’t want you to go destroy them.”

How do you find these trees?
Not easily. With urban development and agriculture, we have lost hundreds, if not thousands of them. So where you can find them is in national forests and areas that have not been greatly disturbed, mountain community areas. We also rely on the public to tell us, if someone comes across one.

How does someone report a tree to you?
Go to our website MountainStewards.org, and under Trail Tree Project, click on Submit a Tree. Then we dialogue with you. We have some researchers scattered around the country, and if one is near that tree, we’ll ask them to go look at it and collect data.

How do you confirm that the tree is an authentic Indian trail tree?
The ideal way is to core the tree—find out the age of the tree to determine if it would have been there around the time of the Indians. But we can’t go all over the country coring trees. Second way is to look for artifacts around the area. We collect as much information as we can, then make the best judgment call.

What is the most spectacular trail tree you have seen?
Probably the one that is on the front cover of our book—it is in northeast Georgia. That tree is roughly three feet in diameter, bent fairly close to the ground, and stretched out about 20 feet before it goes up vertically. You look at that and say, “No way in heck could that have ever been done by mother nature.”

What do these trees tell you about Native Americans from many years ago?
That they were very smart and very close to the Earth. They could name every plant and know what they could use it for. They knew the trees and could use them to their benefit. That’s why pioneers hired Indians as guides—that’s the only way they could get around. These people knew a lot and they were very smart and very knowledgeable. Unfortunately, a lot of knowledge is gone now because we lost the elders.

Tell us about the documentary.
About the same time we were publishing the book, a friend named Robert Wells (no kin to me), who is a filmmaker, said we needed to make a documentary about the trees. So in 2007, we started traveling across the Southeast and out West to interview Native American elders from numerous tribes who have confirmed that their ancestors bent the trees. We have 80 hours of film in the can, and about half is edited. We are in the script writing stages right now, and we have narrators and a music guy lined up. Hopefully by this summer, we will have the first hour of a three-hour series that will be in a DVD format, to go with the book. We also want to produce a 21-minute version that will go into a half-hour TV program, and a 42-minute version for a one-hour show. Then we’ll take it to PBS or some public TV group and get them to air it.

So far, you have identified 2,034 trees in 40 states. How many more do you think are still undiscovered?
Every year, I say, “This must be the end of it. We don’t have any more.” Then we find another hundred or so. I don’t know if we will ever find the end of it. They haven’t dried up. There are another 12 states that we haven’t looked in yet. We’re also finding them in Canada.