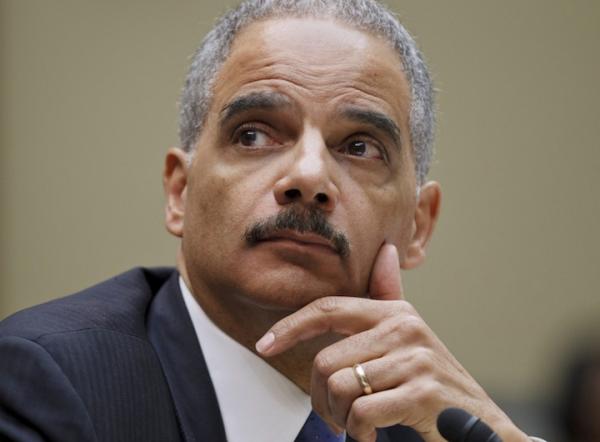 An overwhelming majority of Democrats have said that the Redskins should change their name: Nancy Pelosi, Harry Reid, 49 US Senators and President Obama included. Now, add to the list U.S. Attorney General Eric Holder.

During an appearance on ABC’s This Week, Holder was asked if the name should change.

“I’m going to speak very personally now,” Holder said. “The name ought to be changed. It’s an offensive name. The Redskins, that organization is a great one. It’s a team with a storied history that has huge amounts of support in Washington, D.C., and in the 21st century they could increase their fan base, increase their level of support, if they did something that from my perspective that is so obviously right.”

RELATED: There’s a ‘Redskins Pride’ Caucus in the Virginia Legislature. What?

Despite the growing opposition to the name, one group of ‘Redskins’ fans recently pushed back on the name change. Some Virginia legislators have created a “Redskins Pride Caucus,” and say that the name should not be changed because to them, it’s about “community unity,” rather than anything offensive. 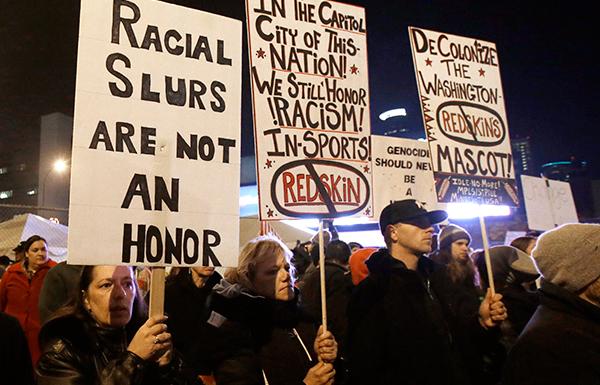 AP Photo/Jim Mone
American Indians and their supporters gather outside the Metrodome to protest the Washington Redskins’ name, prior to an NFL football game between the team and the Minnesota Vikings, Thursday, Nov. 7, 2013, in Minneapolis. (AP Photo/Jim Mone)

The changing of the racist name of the Washington Redskins football team is looking more and more certain — to everyone, that is, except the team’s own honchos. Owner Dan Snyder stated just over a year ago, “We will never change the name of the team … It’s that simple. NEVER — you can use caps.” Sportscaster Al Michaels, who has talked with Snyder on the subject, says the owner “basically said [the team would change its name] ‘over my dead body.’”

Yesterday, following the announcement that the U.S. Patent and Trademark Office was rejecting six of the team’s trademarks, the team’s lawyer offered a similarly stubborn statement. Unlike some previous feeble attempts from Redskins representatives to assert that the name “honors” American Indians, attorney Bob Raskopf stuck to the legal-ese:

“As the district court’s ruling made clear in 2003, the evidence ‘is insufficient to conclude that during the relevant time periods the trademark at issue disparaged Native Americans…’ The court continued, ‘The Court concludes that the [Board’s] finding that the marks at issue ‘may disparage’ Native Americans is unsupported by substantial evidence, is logically flawed, and fails to apply the correct legal standard to its own findings of fact.’ Those aren’t my words. That was the court’s conclusion. We are confident that when a district court review’s today’s split decision, it will reach a similar conclusion.”

So… is the team’s name racist? Should it be changed? Those are not questions Raskopf is paid to address, nor are they questions Snyder and his surrogates ever really address. It’s all about what they can get away with, legally, not what is right or wrong.

It’s not about reviewing the facts — it’s about selling their version of the facts, a tactic demonstrated in a comment of Raskopf’s that surfaced in an AP story titled “Ruling adds momentum for Redskins name change”:

“There’s no momentum in the place that momentum matters,” Raskopf said. “And that’s in Native America.”

This is an attempt to sell two false narratives. One is that American Indians don’t care about the issue. And the other, implied, false narrative is that the opinions of American Indians matter, at all, to the Redskins organization. (“We would change something, but we’ve looked around and nobody seems to be upset. Just kidding, we didn’t really look. And also just kidding, we wouldn’t change anything anyway.”)

Evidently he’s not getting his news from this website, where we’ve reported that “67 Percent of Native Americans Say Redskins Is Offensive”. Raskopf may also have missed the story about the Yocha Dehe Wintun Nation buying a TV ad during the NBA Finals. He may have missed the National Congress of the American Indians’ statements (there have been a few) condemning the name, as well as the activism of Native American Olympian Billy Mills (both Mills and NCAI Chairman Brian Cladoosby praised yesterday’s ruling.) He may have missed ICTMN columnist Gyasi Ross — who not long ago professed not to care about the issue — joining Oneida Indian Nation Representative Ray Halbritter on ESPN’s Outside the Lines.

Ross appeared on MSNBC and HuffPo Live in the wake of yesterday’s news — Raskopf might have missed those clips as well.

He may even have missed the uproar over the Navajo golf tournament the Redskins sponsored — a sneaky move that caused the Notah Begay III Foundation and the National Indian Gaming Association (NIGA) to sever ties with the event. The debacle happened to be preceded by a condemnation of the name by the Navajo Nation Council.

No momentum in Native America? Here’s a tip for Raskopf, Snyder, and the Redskins organization: If you don’t see “momentum” against your team’s offensive name in “Native America,” it’s because you’re not looking. Try looking in Indian country. That’s what it’s called. Learn to call it by its name and you might start learning a whole bunch of other things.