The measure, sponsored by Rep. Markwayne Mullin, R-Okla., now goes to the full House of Representatives for consideration.

“Oklahoma has been blessed with countless Native American veterans, including my grandfather Kenneth Morris,” said Mullin, a member of the Cherokee Nation of Oklahoma. “It is important that we properly honor these brave soldiers and tell their story for generations to come. This memorial to our Native American veterans will serve as a small measure of thanks for their service and sacrifice to this great nation.”

A Native American veterans memorial was authorized in 1994 as part of the National Museum of the American Indian. Mullin’s bill allows the memorial to be erected outside rather than inside the museum, as specified in the 1994 act. An outdoor memorial is considered more feasible.

The memorial is to be built with private contributions.

Amid all the controversy and ugliness associated with the surging push to have NFL team owner Dan Snyder change the widely considered racist name of his Washington, D.C. franchise, something truly positive for Indian country is developing in the U.S. capital.

This legislation amends the Native American Veterans’ Memorial Establishment Act of 1994 to allow the National Museum of the American Indian to construct a memorial to Native Veterans on the museum’s grounds, which is on the National Mall. Current law authorizes a memorial inside the confines of the museum, but there is not sufficient space within the facility to construct a proper tribute to Native American Veterans.

A Cherokee, and a member of the Natural Resources subcommittee on Indian and Alaskan Native Affairs, Mullin noted the importance of the introduction and passage of H.R. 2319.

“Our Native American heritage is one we can take pride in and one we should respectfully honor,” said Mullin, in a press release. “Passage of this legislation is vital to get this project off the ground and get our brave Native Americans who fought for our freedoms the memorial they deserve. I thank my colleagues for their support and look forward to working together as we pay tribute to our Native American veterans.”

Members have shown strong, bipartisan support for H.R. 2319, with 10 cosponsors including Congressman Tom Cole (R-Oklahoma) and Congressman Raul Ruiz (D-California). (Senator Schatz’s bill also enjoys bipartisan support, an encouraging sign. The original 1994 memorial legislation too was passed with support from both sides of the aisle.)

“I am pleased to co-sponsor this legislation with Congressman Mullin,” said Cole, who is a member of the Chickasaw Nation. “We both have great pride in our Native American heritage and recognize the importance of sharing that heritage with others. It is high time that the National Museum of the American Indian is able to move forward with the construction of a memorial to honor our veterans on its grounds. This bill facilitates that goal and also approves museum fundraising efforts, paving the way for us to truly recognize those Native Americans who bravely served our country.”

“Throughout American history, Native Americans have served our country with honor and bravery,” said Ruiz. “It is important that we highlight their patriotism and sacrifice with a Native American veterans’ memorial on the National Mall, and I’m proud to join my colleagues in strong bipartisan show of support for this legislation.”

“I respect and admire any man or woman who has donned a uniform and played their role in securing and defending America’s liberties,” Baker said. “The Cherokee people have a deep tradition in American military history. Many fine young men and women have served and to all of them we owe a debt of gratitude. A memorial in D.C. near the National Museum of the American Indian is a fitting tribute and I thank Representative Mullin and the other sponsors for making it a priority. Every one of us has a family member with a veteran’s story. They served and they fought – and many of them died – for the freedoms that we all enjoy today. I hope we keep their history alive.”

To track the progress of Senator Schatz’s bill in Congress, click here.

To track the progress of Representative Mullin’s bill in Congress, click here.

Read more at http://indiancountrytodaymedianetwork.com/2013/06/15/national-memorial-native-american-veterans-may-finally-be-built-149919
By Katherine Boyle,
The Washington Post  May 23, 2013 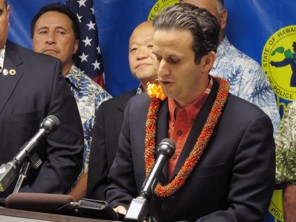