By Lorraine Loomis, Chair of the Northwest Indian Fisheries Commission

It has been a long year since Billy Frank Jr. walked on from this world on May 5, 2014. We deeply miss our longtime leader and good friend. We will continue to stay on the course he set for us as sovereign nations with treaty-reserved rights who co-manage the natural resources given to us by the Creator.

During this past year, Billy’s life as a champion of tribal sovereignty, treaty rights and natural resources has been honored widely by tribal, state and federal governments, conservation organizations and others.

His March 9 birthday has been declared a holiday by many of the treaty Indian tribes in western Washington. At the Squaxin Island Tribe, a street leading to the tribe’s natural resources building has been named Billy Frank Jr. Way.

The state of Washington gave Billy a Medal of Merit to honor his lifetime of service to all of the people of Washington. The award recognizes that Billy’s “courage, determination and leadership resulted in unique and meaningful contributions to our state and helped make Washington a better place to live,” said Washington Gov. Jay Inslee.

The state Senate passed a resolution recognizing his legacy. “Through his lifetime of kinship with the natural world, Billy Frank Jr. helped create a healthy environment that can sustain salmon, achieved change, and brought diverse communities together around shared desires through nonviolent means,” according to the resolution.

At the federal level, a bill to rename the Nisqually National Wildlife Refuge for Billy has been introduced by U.S. Rep. Denny Heck. The bill also would create a national historic site at the refuge to mark the place where the Medicine Creek Treaty was signed in 1854.

There is no question that all of these awards and honors are sincere and well-deserved. They are important because they help us to remember Billy and what he stood for: the protection of tribal cultures, sovereignty, treaty rights and the natural resources that sustain Indian people. 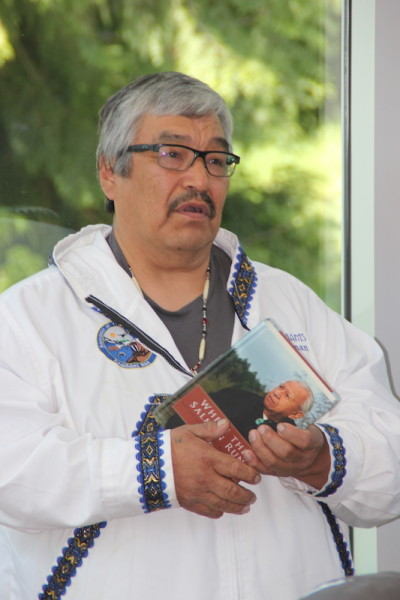 Mike Williams, KRITFC chair, speaks at a recent meeting of the NWIFC.

But it is a recent event in Alaska that is perhaps the best example of Billy’s legacy.

When the indigenous Yupik people of southwestern Alaska were being denied their right to harvest salmon by state and federal fisheries managers, they called Billy. He visited several times to provide encouragement and help the Yupik achieve their dream of co-managing their shared natural resources.

On May 5, the first anniversary of Billy’s passing, 33 Yupik villages on the river came together to create the Kuskokwim River Inter-tribal Fish Commission. Through the KRITFC, the Yupik will no longer serve only in an advisory role, but will work as co-managers with state and federal fisheries managers.

“It was a great day for the Yupik people,” said Mike Williams, who was elected as the first chairman of KRITFC. “The legacy of Billy Frank is stronger now than ever before, and will get stronger,” he said.

We will continue to honor that legacy by carrying on Billy’s work to recover salmon and safeguard our treaty-reserved rights as co-managers of the natural resources that have always sustained us.