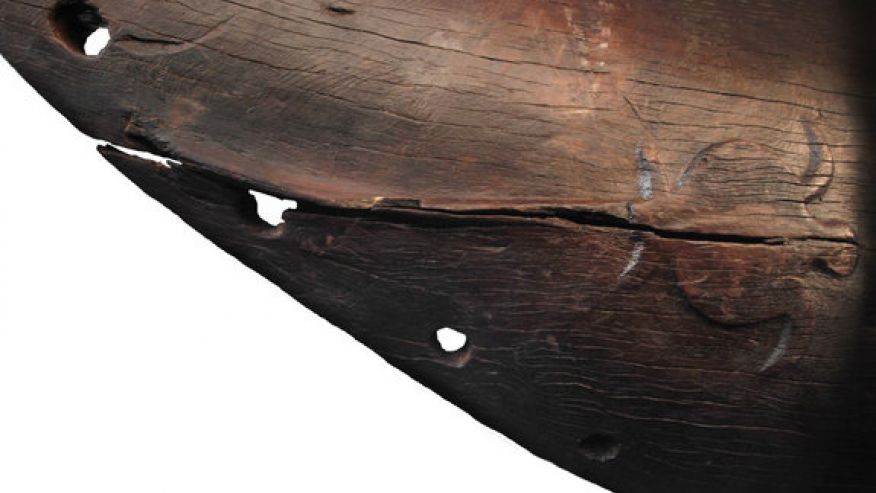 This turtle was carved on the hull of a 600-year-old canoe found in New Zealand. Turtles are rare in pre-European Maori art. The engraving might be a nod to the Maori’s Polynesian ancestors, who revered the seafaring reptiles. (Tim Mackrell, Conservation Laboratory, The University of Auckland)

The remote archipelagos of East Polynesia were among the last habitable places on Earth that humans were able to colonize. In New Zealand, human history only began around 1200-1300, when intrepid voyagers arrived by boat through several journeys over some generations.

A piece of that early heritage was recently revealed on a beach in New Zealand, when a 600-year-old canoe with a turtle carved on its hull emerged from a sand dune after a harsh storm. The researchers who examined the shipwreck say the vessel is more impressive than any other canoe previously linked to this period in New Zealand. [The 9 Craziest Ocean Voyages]

Separately, another group of scientists discovered a climate anomaly in the South Pacific during this era that would have eased sailing from central East Polynesia southwest to New Zealand. Both findings were detailed Sept. 29 in the journal Proceedings of the National Academy of Sciences.

Canoe on the coast

The canoe was revealed near the sheltered Anaweka estuary, on the northwestern end of New Zealand’s South Island.

“It kind of took my breath away, really, because it was so carefully constructed and so big,” said Dilys Johns, a senior research fellow at the University of Auckland in New Zealand.

The hull measured about 20 feet long and it was made from matai, or black pine, found in New Zealand. The boat had carved interior ribs and clear evidence of repair and reuse. Carbon dating tests showed that the vessel was last caulked with wads of bark in 1400.

Johns and colleagues say it’s likely that the hull once had a twin, and together, these vessels formed a double canoe (though the researchers haven’t ruled out the possibility that the find could have been a single canoe with an outrigger). If the ship was a double canoe, it probably had a deck, a shelter and a sail that was pitched forward, much like the historic canoes of the Society Islands (a group that includes Bora Bora and Tahiti) and the Southern Cook Islands. These island chains have been identified as likely Polynesian homelands of the Maori, the group of indigenous people who settled New Zealand.

The boat was surprisingly more sophisticated than the canoes described centuries later by the first Europeans to arrive in New Zealand, Johns told Live Science. At the time of European contact, the Maori were using dugout canoes, which were hollowed out from single, big trees with no internal frames. In the smaller islands of Polynesia, boat builders didn’t have access to trees that were big enough to make an entire canoe; to build a vessel, therefore, they had to create an elaborate arrangement of smaller wooden planks.

The newly described canoe seems to represent a mix of that ancestral plank technology and an adaptation to the new resources on New Zealand, since the boat has some big, hollowed-out portions but also sophisticated internal ribs, Johns and colleagues wrote.

The turtle carving on the boat also seems to link back to the settlers’ homeland. Turtle designs are rare in pre-European carvings in New Zealand, but widespread in Polynesia, where turtles were important in mythology and could represent humans or even gods in artwork. In many traditional Polynesian societies, only the elite were allowed to eat turtles, the study’s authors noted.

A separate recent study examined the climate conditions that may have made possible the long journeys between the central East Polynesian islands and New Zealand. Scientists looked at the region’s ice cores and tree rings, which can act like prehistoric weather stations, recording everything from precipitation to wind patterns to atmospheric pressure and circulation strength. [10 Surprising Ways Weather Changed History]

Because of today’s wind patterns, scholars had assumed that early settlers of New Zealand would have had to sail thousands of miles from East Polynesia against the wind. But when the researchers reconstructed climate patterns in the South Pacific from the year 800 to 1600, they found several windows during the so-called Medieval Climate Anomaly when trade winds toward New Zealand were strengthened.(That anomaly occurred between the years 800 and 1300.)

“There are these persistent 20-year periods where there are extreme shifts in climate system,” the study’s head author, Ian Goodwin, a marine climatologist and marine geologist at Macquarie University in Sydney, told Live Science. “We show that the sailing canoe in its basic form would have been able to make these voyages purely through downwind sailing.”

Goodwin added that a downwind journey from an island in central East Polynesia might take about two weeks in a sailing canoe. But the trip would take four times that if the voyagers had to travel upwind.