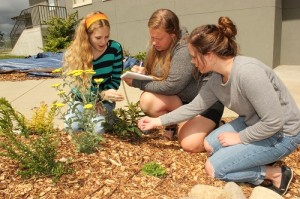 Hanna Bridgham, Cassidy Forler and Tessa Rurup, students at Eatonville High School, inventory plants in a new raingarden built in a courtyard at their school.

Eatonville will keep its title as the “rain garden capital” because of some work being done by the Nisqually Indian Tribe and the Nisqually River Council. Working with local high school students, the tribe and the council are building six rain gardens in Eatonville this year, continuing several years of stormwater mitigation work in the community.

“If we don’t do something, growth in Eatonville will have a massive detrimental impact on salmon and water quality,” said David Troutt, natural resources director for the Nisqually Indian Tribe. “But, if we can handle the growth the right way, we can have salmon and a healthy community. Rain gardens are an important tool in making that happen.”

Dozens of rain gardens have already been built throughout Eatonville, giving the city the distinction of the highest density of rain gardens of any community in the country.

Rain gardens landscape amenities that are designed to capture and absorb polluted runoff from impervious surfaces, like roofs or parking lots. They reduce runoff by allowing stormwater to soak into the ground instead of flowing into storm drains causing pollution, flooding, and diminished groundwater.

As a part of the project, the council’s Nisqually River Education Project is engaging local high school students in building and caring for the city’s growing collection of rain gardens. The education project is working with four students from Eatonville High School to design each new rain garden. Each student also participated in the tribe’s Stream Stewards training course this summer.

Poor stormwater management leads to high flows in the winter and low flows in the summer. The Mashel River, which runs through Eatonville, already is too low and too warm for fish.

Low flows in the Mashel typically occur just as adult chinook salmon are making their way back to spawn. “Adult salmon need cool, deep pools to rest as they swim upriver,” Troutt said.

“This kind of effort is what we’d like to see across the watershed and across the region,” Troutt said. “When we end up saving salmon and Puget Sound, it will be because we’ve found ways to handle the population growth that is going to come.” 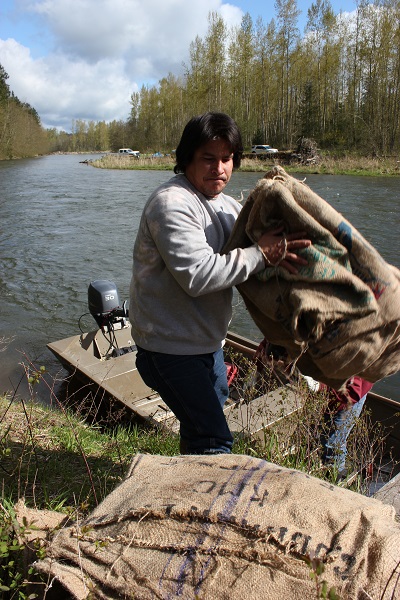 Eddy Villegas, a member of the Nisqually Tribe’s planting crew, unloads burlap sacks after a trip across the river.

The Nisqually Indian Tribe is taking a creative approach to help a new streamside forest thrive.

“We’re using thousands of donated burlap sacks and transporting them across the Nisqually River by boat to make sure thousands of newly planted trees don’t get overrun by grass,” said David Troutt, natural resources director for the tribe. The tribe’s restoration planting crew recently reforested 15-acres of off channel habitat owned by the Nisqually Land Trust.

“Usually, we’d drive in with weed whackers and selectively use some herbicide to make sure the grass doesn’t take back over,” Troutt said. “But, this parcel is wet and remote, which means we had to take extreme measures.”

Much of the Land Trust property on the mainstem Nisqually is covered with water, so the tribe decided against traditional herbicide, because it might have spread downriver. Placing burlap sacks around the young trees prevents grass from crowding them out. Green Mountain Coffee Roasters in Sumner donated five pallets of used burlap sacks for the project.

After the initial work, the crew will return by boat every few weeks with weed whackers to take care of the plants they couldn’t put burlap around because they were too close to water. “We’ll have to maintain some plantings by hand because we’d probably see burlap sacks floating down the river if we tried to keep the grass down that way,” Troutt said.

The tribe employs a handful of tribal members on a planting crew that conducts and maintains salmon restoration planting projects across the watershed. Almost every habitat restoration project in the watershed has some element of planting and plant care. In just more than five years the crew has planted over 200,000 trees and shrubs.

Off-channel habitat is vital to the survival of young salmon, especially chinook, coho and steelhead. Those species can spend take more than a year before leaving for the ocean, so the quality of freshwater habitat is especially important. Both Nisqually chinook and steelhead are listed under the federal Endangered Species Act.

“Off channel areas give salmon a place to rest and feed during the winter when the mainstem of the river might be flooding, making it inhospitable for them,” Troutt said. “Hopefully, by restoring and protecting this spot on the river, we’ll see larger salmon runs for everyone in the future.”