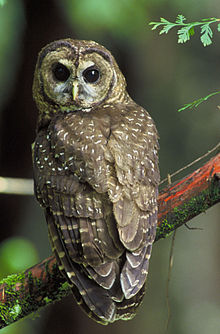 GRANTS PASS, Oregon (AP) – Federal wildlife officials are moving ahead with an experiment to see if killing a rival owl will help save the northern spotted owl from extinction.

The U.S. Fish and Wildlife Service said Tuesday it gave final approval to a plan to send trained hunters into the woods to shoot barred owls.

Barred owls migrated from the East and arrived in spotted owl territory in 1959. The agency says they have since become the biggest threat to spotted owl survival.

Plans are to kill or capture barred owls in four study areas in Washington, Oregon and Northern California over the next four years.

The spotted owl forced big changes in management of national forests when environmentalists won lawsuits to protect the old growth forests where the owls live from logging.

(Copyright 2013 The Associated Press. All rights reserved. This material may not be published, broadcast, rewritten or redistributed.)