The U.S. Department of Transportation has issued an emergency order requiring crude oil from North Dakota and Montana to be tested before being transported by railroads.

Tuesday’s order follows several fiery derailments involving shipments of crude oil. It is intended to ensure greater safety when the highly flammable liquid is being shipped.

The order is a response to derailments of trains carrying oil from the Bakken region in North Dakota that resulted in explosions and fire, including a train that exploded in Lac-Megantic, Quebec, near the U.S. border, in July, killing 47 people.

There is far more work to be done on securing the safety of oil trains, but this is one step of many that can be part of a solution,” Wyden said in a written statement.

Shippers already had to classify oil shipments based on their risk for explosion or fire, but federal investigators found that many shipments were being misclassified as less dangerous. The order requires testing for classification before shipment.

Jay Tappan, Chief of Columbia River Fire and Rescue, said his department has been waiting for stricter federal rules to help his responders know how to handle an oil train fire.

“I think we’re all finally starting to understand that the Bakken crude is a little bit more volatile, little more flammable than we had thought before so it’s good that they’re getting a handle on the exact classification of that commodity,” Tappan said.

Better classification of the Bakken crude was one of many issues raised at a January meeting between railroads, first responders and Oregon senators Ron Wyden and Jeff Merkley in Portland. Local responders and state spill and emergency planners had previously received little information from railroads and oil companies about shipments of crude oil through their areas.

Tappan’s is one of many fire departments in the Pacific Northwest preparing for the risk of an oil train derailment. A port in Oregon and five refineries in Washington currently accept rail shipments of crude oil. Several other shipping terminals have been proposed in the region. 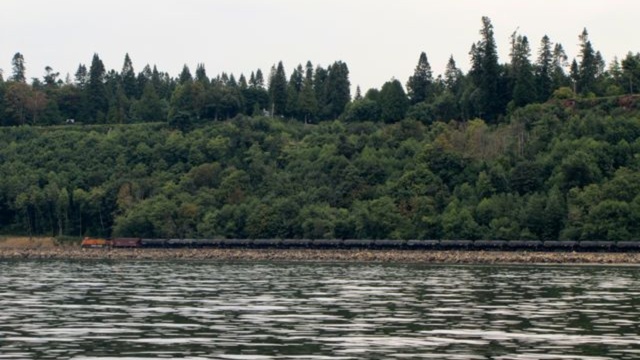 All that combustible fuel being produced by America’s fracking boom has federal transportation safety officials on edge.

Inspectors have started scrutinizing train manifests and tank car placards on trains departing from North Dakota’s Bakken region. The region is producing copious quantities of fracked oil, which is being carried to refineries in railway cars — many of them in a railcar model that’s prone to explode.

Operation Classification, aka the Bakken Blitz, was launched last month, just weeks after one such train carrying Bakken oil derailed and exploded in Quebec, killing 47 people and leveling much of the formerly scenic town of Lac-Mégantic. The U.S. Department of Transportation says it began planning the inspections in March after officials noticed discrepancies between the contents of rail cars and the hazardous warnings they bore. From Reuters:

“We need to make sure that what is in those tankers is what they say it is,” Cynthia Quarterman, administrator of the Department of Transportation’s Pipeline and Hazardous Materials Safety Administration, told reporters.

Highly combustible, light crude from the Bakken region is particularly dangerous, Quarterman said, and inspectors will make sure the fuel is properly labeled and handled with care.

Officials want to make certain that those responsible for the shipments know how dangerous their cargo is.

“The flashpoint needs to be taken into account,” Quarterman said, referring to the combustibility of flammable liquids that can vary according to the type of crude.

The Obama administration is also mulling new safety rules to address the boom in oil hauling; a draft version should be released within weeks. On Friday, the administration introduced temporary emergency rules designed to prevent a repeat of the Lac-Mégantic disaster on American soil, including a ban on leaving vehicles unattended if they are carrying hazardous materials.

Pacific Northwesterners worried by three planned new coal export hubs along their shorelines have something new to fear.

Oil refiner Tesoro and terminal operator Savage are trying to secure permits to build the region’s biggest crude oil shipping terminal at the Port of Vancouver, along the Washington state side of the Columbia River.

KPLU reports that the proposed terminal would receive crude by rail from oil fields in North Dakota and transfer it onto oceangoing tankers for delivery to refineries along the West Coast. And that’s just one of many plans to boost shipments of oil through the region to coastal ports. Environmentalists are not pleased, fearing oil spills among other problems.

The Port of Vancouver got an earful Thursday from backers and opponents of a proposed crude-oil transfer terminal who packed the Board of Commissioners’ hearing room to trumpet their arguments.

Executives with Tesoro Corp. and Savage Companies, who want to build the terminal to handle as much as 380,000 barrels of oil per day, told commissioners the project capitalizes on rising U.S. oil production, boosts the local economy and will operate in ways that minimize harm to the environment.

“A lot of family-wage jobs will be created,” said Kent Avery, a senior vice president for Savage.

Critics told commissioners the project, which would haul oil by rail and move it over water, conflicts with the port’s own sustainability goals, increases the risk of oil spills in the Columbia River and further fuels global warming.

Washington Gov. Jay Inslee (D) will have the final decision on the proposal. From the Columbian again:

Port managers are negotiating the terms of a lease agreement with Tesoro and Savage. Commissioners may decide a proposed lease arrangement on July 23.

Such a decision won’t end the matter, though. The state Energy Facility Site Evaluation Council will scrutinize the proposed crude oil facility and make a recommendation to Gov. Jay Inslee, who has the final say.

The council’s review could take up to a year or more. The companies hope to launch an oil terminal at the port in 2014.

The Seattle-based nonprofit Sightline reports that 11 port terminals and refineries in Washington and Oregon “are planning, building, or already operating oil-by-rail shipments” and “if all of the projects were built and operated at full capacity, they would put an estimated 20 mile-long trains per day on the Northwest’s railway system.”