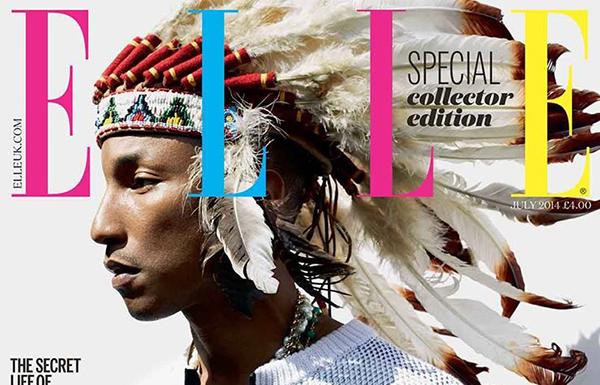 Pharrell Williams appears on a special-edition cover of Elle UK‘s July issue wearing a feather headdress, and Natives are not at all “Happy” about it. In fact, they’re tweeting their disgust on Twitter using the hashtag #NOThappy — a reference to Pharrell’s mega-hit “Happy.”

Pharrell earned smirks in January for wearing an enormous “Mountie”-style hat to the Grammy Awards — but he stuck with the look and it became a signature style. Which makes Elle UK all the more proud of themselves: “we persuaded ELLE Style Award winner Pharrell to trade his Vivienne Westwood mountie hat for a native American feather headdress in his best ever shoot,” reads promotional copy on the mag’s website. The photos were taken by Doug Inglish.

The preview image was posted to Elle UK’s Facebook page, and has racked up hundreds of comments within a few hours. Offended Facebookers have also taken their complaints to Pharrell’s own page:

Pharrell Williams on the cover of the July 2014 collector’s edition issue of Elle UK, shot by Doug Inglish.

Taino Ray: How can you do something so stupid and disrespectfulll.. you are not a Chief Pharrel.. The eagle feathers are sacred… Even if you are part Native the headdress is off limits… Its for Warriors and people of the plains culture.. You don’t have the right to wear that Pharrel… neither does Cher or Emerson Windy… You guys don’t get it…. You will learn the hard way by us Natives telling you so…

Gail Lichtsinn: You have no right to wear a headress that is so sacred to native people..Those headresses are earned and not worn to make a buck or draw attention..They have meaning and are worn by our men with pride and dignity..This is a mockery of a proud people..We are not a joke and take these things very seriously..Go back to wearing your OWN clothes

Sandy Johnson: I love your music! BUT…please don’t insult our Indigenous People by wearing a headdress. They are earned one Eagle feather at a time through acts of selflessness and bravery. Thank you.

And a few of the #NOThappy tweets:

We’ll probably have more on this story in the near future, as neither Pharrell nor Elle UK have commented on the controversy. As wrong as this sounds, it’s going to be said: You really should have stuck with the mountie hat, Pharrell.