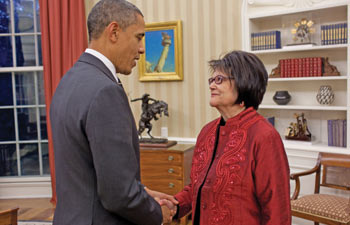 It’s part of the legacy the leader from the Blackfeet tribe left behind when she died in 2011, and one that still resounds with Terry Payne.

“Elouise had a voracious appetite for justice, and she was an inspiration to me and so many other people,” said Payne, a Missoula businessman whose family was the lead donor for construction of the Payne Family Native American Center on the University of Montana campus.

Now Payne is helping fund an effort to complete the building. He provided the launching gift for the $1.2 million Elouise Cobell Land and Culture Institute, dedicated to the passionate advocate of Native rights who was instrumental in obtaining a $3.4 billion Indian trust settlement from the federal government.

Pending approval by the Montana Board of Regents in Helena this week, the Cobell Institute is envisioned to be a complex of labs, classrooms and a small theater in the unfinished lower level of the three-year-old Native American Center on the southwest edge of the UM Oval.

University President Royce Engstrom announced creation of the institute Wednesday at a ceremony in the center’s Bonnie HeavyRunner Gathering Place.

“Her life’s work was the pursuit of justice and we here at the University of Montana are humbled that her family has permitted us to honor her,” he said.

The institute, said Engstrom, can be a place “where future leaders will meet the challenges around land and asset management as well as understand worldwide cultures of indigenous people.”

The addition in the “garden level” of the building will be “a space where students can work effectively in small and sometimes not so small groups on real-world problems, in this case all related to Native communities,” said Chris Comer, dean of UM’s College of Arts and Sciences that includes the Native American Studies Department.

There are 6,500 square feet to work with, and on-campus charettes began Thursday (March 7) to determine how best to do it. Comer said the building’s “interesting geometry” – it’s built around a 12-sided rotunda, each side representing a Montana tribe – will make it “a real puzzle to say how we best use that space.”

The working idea is for two laboratories – a land lab filled with computers and a culture lab with digital and media resources. Another room will probably be set up as a classroom with projection capabilities for digital movies.

“Film studies have become important in a number of areas of the College (of Arts and Sciences) that really have no proper venue for that,” Comer said.

The other two rooms will likely be standard classrooms, built in a way that can accommodate meetings. Comer said the institute will be a collaborative affair, designed not just for the Native American Studies Department, but for geography, forestry and conservation, anthropology and law students as well.

The land lab will allow students to work on intensive mapping projects.

“When you think about mapping in Indian Country, it’s really complex because reservation land has all different kinds of overlapping ownership, from trust land to tribally controlled land to individual fee patent land,” said Dave Beck, who chairs the Department of Native American Studies.

A sophisticated GIS-centered lab will allow the overlay of historic maps to map landownership patterns with natural and cultural resources. An upstairs room in the Native American Center is dedicated to the Indian Land Tenure Foundation, which does similar work.

The Minnesota-based foundation has been very encouraging of the Cobell Institute project.

“They’ve basically said if you build this we’ll work with you to help students identify and get into real-world projects for Native communities,” said Comer. “We’re really excited by the prospect of working with groups like that.

“We don’t want busywork exercise. That’s really Royce’s vision: When they’re working on classroom projects, those projects will produce something that’s helping a community and making a real difference.”

Beck said the culture lab will probably provide access to such resources as creative language materials from tribes and communities, as well as distance learning capabilities that allow faculty from across the campus to have face-to-face interaction with indigenous communities in New Zealand, Australia and Norway.

While the Payne family provided the lion’s share of the $1.2 million toward construction, and other funding sources have been tapped, Comer said some money still needs to be raised. He hopes Wednesday’s announcement spurs those efforts.

Construction will begin as early as next month, and officials said the Cobell Institute could be ready for students by the end of the year.