Potlatch Fund is a Native-led nonprofit that provides grants and leadership development in tribal communities throughout Washington, Oregon, Idaho and Montana. The Fund’s driving mission is to expand philanthropy within Northwest tribal nations by inspiring and building upon the tradition of giving. From potlachs to powwows, building community and sharing wealth has always been a part of Native peoples’ way of life.

On November 2, the Potlatch Fund held its highly anticipated annual fundraising gala. With venue location and theme changing every year, the one constant the gala promises is attendees will  be inspired and given ample opportunity to show their generous side. This year the location was Little Creek Casino Resort and the theme: ‘Spirit of Reciprocity’.

“This gala brings together people of many different tribes, from many different communities, from many different organizations, and unites us in the common goal to raise money to help us meet the needs of Northwest Indian Country,” said Dr. Charlotte Coté, Potlach Fund board president. “Our theme ‘Spirit of Reciprocity’ really captures the essence of our organization’s mission to expand philanthropy for and among tribal communities, while empowering community leaders with the tools they need to succeed.

“We have gathered here in the spirit of the potlatch tradition with the sharing of song, dance, art, and of course delicious food,” Dr. Coté continued. “The support we’re so thankful to receive allows us to keep alive the spirit of reciprocity. I raise my hands to everyone who joins our Potlatch Fund canoe and helps us paddle to our fundraising goals.”

Since 2005, Potlatch Fund has re-granted over $4.5 million in the support of tribes, tribal nonprofits, Native-led nonprofits, Native artists, and Native initiatives in their four-state service area. Through a focus on youth development, community building, language preservation, education and Native arts, they are building a richer future for all that they serve.

The Potlatch Fund’s annual gala is their major fundraising event and brings together people from a variety of neighboring tribes, organizations, corporations and communities. Close to 20 Washington State tribes were listed as event sponsors, including the Tulalip Tribes listed as a Raven-level sponsor.

At the gala, Native community impact makers are given a chance to share their plans for the future and learn how other like-minded individuals and groups are striving to make a positive difference for the benefit of Indian Country. This is an invaluable benefit for up-and-coming leaders and organizations who can sometimes struggle to get their message broadcast to larger audiences.

“At Potlatch Fund, we recognize the importance of bringing people together to share our stories and experiences,” added Dr. Coté. “Our intent is to generate deeper connections and conversation among Native professionals and our extended community. All are welcome to attend and build relationships with our Native communities.”

A dynamic and truly benevolent event that brought together tribal leadership, representatives and impact makers from all across the Pacific Northwest, the fundraising gala also had additional benefits for guests. In a setting befitting those who strive to make the world a better place than they found it, the mostly Native gathering took in the sights of Squaxin Island Tribe drummers and dancers, heard the enchanting violin sounds of Lummi musician Swil Kanim, and perused a silent auction filled with unique Native art.

“Potlatch Gala is the most fun event of the year,” shared Suquamish Foundation Director, Robin Little Wing Sigo. “Not only does it raise money, but it raises spirits, energy and excitement. Everyone gets to get dressed up and connect with people they may only see once or twice a year. Also, so many incredible artists donate their artwork for the silent auction that gives us a good opportunity to purchase wonderful Native bling.”

“We lovingly call it ‘Native Prom’ because it’s one of the last gatherings of the year and we all get dressed up to celebrate being Native,” added Colleen Chalmers, program manager at Chief Seattle Club. “There is representation from so many different tribes yet we’re here as an Indigenous community proving we are still here and we are thriving.”

The ‘Spirit of Reciprocity’ gala provided the opportunity to share culture through song and dance performances, to support and celebrate Native art and artists, and to assist Potlatch Fund with its fundraising efforts as it continues to undertake important work throughout Northwest Indian Country. The evening centered on generosity and was a success as pre-   and post-dinner networking receptions brought people together to create future impact opportunities, while close to $60,000 was fundraised that will ultimately go to where it’s needed most, Native communities.

TULALIP – Dana Arviso, Dine’, executive director of the philanthropic Potlatch Fund, made this announcement on October 27 about the upcoming Potlatch Fund gala at the Tulalip Hotel Resort Casino:

“After speaking with representatives from the Tulalip Tribes to offer our profound condolences and words of comfort, Potlatch Fund will move forward with holding our gala on Saturday, November 1. Our thoughts and prayers are with the Tulalip Tribal community, Marysville community, Marysville-Pilchuck High School student body, and all the families impacted by this terrible tragedy.

“We will open the dinner portion of the gala with a moment of silence followed by a healing song to acknowledge the tragedy that has impacted the Tulalip and Marysville communities and offer a space for reflection and healing for all.”

The Tulalip and Marysville communities are grieving after the shooting on October 24 at Marysville-Pilchuck High School. A student, Jaylen Ray Fryberg, 15, of Tulalip shot five classmates in the head before turning the handgun on himself. Fryberg and two other students died; three others — two of them his cousins — are being treated in area hospitals.

Fryberg was generally viewed as a happy and popular student-athlete, but his Twitter messages over the last couple of months indicate he was deeply troubled by personal crises.

Arviso added, “Our hearts go out to everyone affected and even though it’s difficult to hold our event amidst such tragedy, so much of our work that we do at Potlatch Fund is about investing in our Native youth and strengthening our communities.”

The Potlatch Fund raises money to support Native arts, community building, language preservation and education, and the Canoe Journey. In 2014, the Potlatch Fund awarded $242,220 in grants to individuals, organizations and Tribes in the Northwest. 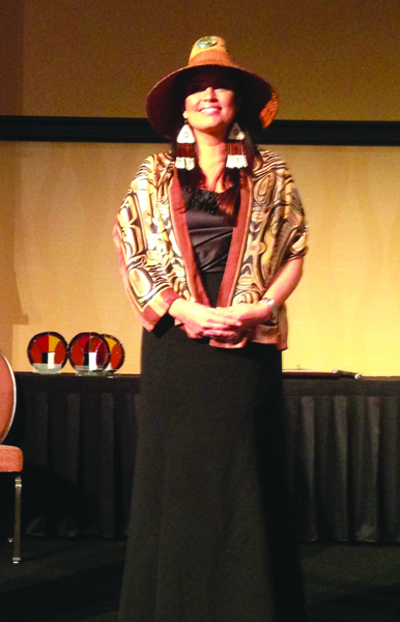 “There are two ways of spreading light. To be the candle, or the mirror that reflects it.” – Edith Wharton

TULALIP – Every year the Potlatch Fund recognizes Native Americans who personify leadership in five areas. Each of the awards is named after a tribal leader who exemplifies what it takes to change the world: The Antone Minthorn Economic Devlopment Award, the Pearl Capoeman-Baller Civic Participation award, the Billy Frank, Jr., Natural Resources Protection award; the Patricia Whitefoot Education Award and the Fran James Cultural Preservation Award. This year, Tulalip’s own Vice-Chairwoman Deborah Parker was among the recognized. She spoke about the experience in a recent interview.

“I’ve known Pearl for years,” she said. “She’s a woman who doesn’t really sit down, she doesn’t rest. She’s a woman who’s always wanted change and works hard to make that change happen. She’s a lady who is all about action and justice.

“To receive an award in the spirit of her work is a complete honor. And as a leader, Pearl embodies that balance of home, work and responsibility. She’s a mother, a grandmother, and a community member who works at the local, state and federal level and she brings all of that together. As an elder she is not on council anymore, but you still see her at conferences helping and motivating the younger generation to not be idle. She’s still working hard and not taking no for an answer.”

“There is no agony like bearing an untold story inside of you.” – Maya Angelou

Although she’s made impacts in many areas, Parker points to her work to make sure that provisions to protect Native American’s from non-natives were included in the reauthorization of the Violence Against Women Act (VAWA).

“It’s not just women, it’s also men who are very emotional about the passage of this bill,” elaborated Parker. “If I was just carrying legislation it would be easy to say thank you and good bye. I used my story, there was no hypothetical here. They had to look me in the face, someone who is a survivor. Being a female tribal leader was another source of strength. People in D.C. had to look at me and say, ‘No, we’re not going to support you or other Native women.’

“Some did,” she continued. “Some said they couldn’t support tribes taking jurisdiction, some were blatantly racist and said they couldn’t believe a non-tribal man would rape a Native American woman. But, what I don’t think anyone imagined is the support. There was so much support from non-tribal women. Native America hasn’t seen that in the past, non-natives supporting legislation to support Native people.”

“When we do the best we can, we never know what miracle is wrought in our life, or in the life of another.” – Helen Keller

Undeniably a role model across the nation, Parker was quiet, embarrassed even, when she talked about her notoriety.

“For the women who come out and say, ‘You’re my hero,’ and every time I receive an award, I feel honored. I accept it on behalf of those women who were murdered, for those women who don’t have a voice. Not just women, I want to acknowledge the young boys and men who have been abused. They need closure too, but where do they get it? Guys don’t stand around the lunch room and talk about sexual abuse because of that stigma surrounding it.”

“My children are 100% supportive. They get to hear my phone calls, they hear the conversations, they hear me fighting for our rights. It’s been a blessing, but being away from my family is the hardest part. If someone asks what it’s like to be a modern day warrior, you give up a lot in the process. My family sacrificed birthdays, holidays, they really put aside everything so we could get this [VAWA] passed.”

“The most effective way to do it, is to do it.” – Amelia Earhart

The Violence Against Women Act including the tribal provisions were approved. Parker explained that although we won the battle, the war’s not over.

“I just have to remind myself to keep going,” she said. “There’s so much work to be done. It’s not just me. There are a lot of amazing tribal leaders who pitch in.”

Parker explained that one of the most important ways to take care of her people is to be in the room where decisions are made. For tribal leaders a trip to Washington D.C. isn’t a vacation, it’s a battleground of constant negotiation, education and efforts to dispel stereotypes about Native Americans.

“If you don’t go, if your face isn’t there, you don’t have a voice,” Parker emphasized. “It’s not what you look like, it’s what you represent. If you are not at the table, you’re not included.”

“Everyone has inside her a piece of good news. The good news is that you don’t’ know how great you can be! How much you can love! What you can accomplish and what your potential is!” – Anne Frank

In closing, Parker exuded hope for the future.

“I feel incredible honored that young girls are inspired to share their voice, to come out with their abuse because I have. I feel honored because they can come out and speak their truth and find healing, not just one, but hundreds and thousands. It is worth it.

“If women can find strength through my words, I’m definitely not going to stop,” she stated. “If I can assist others to create protections for those little children who don’t have a voice, those are giant steps. I never dreamed this could happen in my time.”