An oceanography institute announced today (Monday) that trace amounts of radioactivity from Fukushima have been detected off the West Coast. This stems from the 2011 nuclear plant accident in Japan.

The post-earthquake and tsunami nuke plant accident spilled a large amount of radioactive contamination into the Pacific three years ago. Oceanographers projected that it would take until this year for highly diluted traces to reach the West Coast of North America. And a recent research cruise from Dutch Harbor, Alaska to Eureka, California detected the front edge of the plume multiple times between 100 and 1,000 miles offshore. Ken Buesseler is a senior scientist at the Woods Hole Oceanographic Institution.

“The levels offshore still are quite low. So by that I mean they are a couple units of these Becquerels per cubic meter, something that is about a thousand times less than a drinking water standard,” he said.

Buesseler said he is reluctant to “trivialize” any amount of radiation, but says he personally has no concerns about swimming, boating or eating fish from local waters.

Since the start of this year, Buesseler’s lab has also tested about 50 seawater samples collected at the shore by concerned coastal residents from California to Alaska. All of those results have come up negative. This sampling was paid for through crowdfunding as part of an ongoing “citizen science” monitoring project initiated by Buesseler.

A parallel but independent monitoring effort run through the radiation health lab at Oregon State University found no detectable traces of Fukushima radiation in seawater samples collected earlier this year in near shore waters along the Pacific Northwest coast.

Scientists tracking the plume from Japan look for a short-lived cesium isotope, cesium-134, that serves as the “fingerprint” of Fukushima contamination.

For context, radioecologist Delvan Neville at OSU said it helps to know that the cesium-134 levels reported by the Woods Hole researcher are “much less than the natural background radiation in seawater.” In an interview, Neville was certain the low levels of Fukushima-derived isotopes detected in the northeastern Pacific do not pose an environmental or human health radiological threat.

Buesseler is scheduled to present his findings Thursday during the annual meeting of the Society of Environmental Toxicology and Chemistry in Vancouver, Canada.

He is also responding to questions from the public on the “Ask Me Anything” forum on Reddit at 10 a.m. PST Monday.

The results Buesseler reported corroborate detections of cesium-134 in seawater far offshore from Vancouver Island starting last year. Scientists from Fisheries and Oceans Canada, Health Canada and the University of Victoria are collaborating on a monitoring effort that also includes fish sampling.

None of the salmon, halibut, sablefish and spiny dogfish they have analyzed have contained detectable levels of radiation traceable to Fukushima. 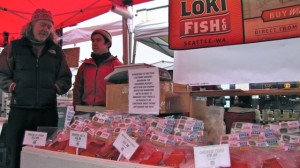 Pete Knutson and his son, Dylan, sell their wild-caught salmon at farmer’s markets around Seattle. “We had people passing on our fish this year. It was directly because they were worried about Fukushima.” | credit: Ashley Ahearn

SEATTLE — Japan’s nuclear disaster released hundreds of millions of gallons of radioactive water in 2011, sparking rampant speculation that a contaminated plume would reach the waters of North America’s West Coast.

Three years later, such speculation is alive and well on the Internet. Consider this video shot at a beach in Northern California and posted last month to YouTube:

“This is one of the problems,” says Kim Martini, a physical oceanographer at the University of Washington who has been following the issue closely. A Geiger counter can tell you if there’s radiation present, she said, “but it can’t differentiate between different kinds of radiation.”

California state officials went back and tested the beach and found the radiation to be naturally occurring in the rock formations there.

Martini and other scientists have received hate mail for trying to dispel some of the online fears about radioactive pollution resulting from the meltdown of Japan’s Fukushima Daichi Nuclear Power Station. It was triggered by the Tohoku earthquake and tsunami, which struck Japan in March, 2011.

“There’s definitely people that you’re never going to convince… I don’t know what to tell you. The science says it’s OK,” Martini said.

Scientists in California and Oregon have collected samples of tuna, a fish known to migrate back and forth across the Pacific, and analyzed them for radioactive isotopes, Cesium-134 in particular, from Fukushima.

Delvan Neville, a PhD candidate in Radiation Health Physics at Oregon State University, has tested dozens of samples of albacore tuna for radioactivity. The U.S. Food and Drug Administration’s intervention levels for cesium 134 and cesium 137 is 1200 becquerels per kilogram. The highest levels he’s seen in his albacore, of both cesium 134 and cesium 137 combined, is 1 becquerel per kilogram – a level so low that his device couldn’t pick it up until he concentrated the samples.

“That’s more than 1,000 times lower than the point where the FDA would even think about whether they need to let people eat that food still,” he said.

Neville joked that he was eating the tuna he caught right alongside the samples he collected for science, “which was actually kind of fun because then I was telling people as we were eating at the table what their approximate dose was due to Fukushima from the food they were eating and it’s this ridiculously small number.”

There is radioactive material from Fukushima making its way across the Pacific Ocean and it has already reached the West Coast in small amounts. The largest concentration of radioactive water released during the nuclear meltdown is moving in a plume across the middle of the Pacific, but models project that the majority of the radioactive water will sink or be pushed west again before it hits the U.S. Scientists are still debating how high those radioactivity levels could be. Here’s an interesting video on ocean currents and Fukushima radioactivity:

“It’s about 20,000 times less than drinking water standards. And so what we like to say is it’s detectable but harmless.”

But despite all the evidence, some fish consumers on the West Coast have been wary.

Pete Knutson has been fishing for salmon in Alaska for more than 40 years. He owns and operates Loki Fish Company with his two sons. On the weekends you’ll find him selling his fish at farmer’s markets around Seattle, with white hair flowing out from under a knit cap and an easy laugh that draws passersby up to his stall.

“We have all different kinds of salmon products, pickled salmon, ikura, smoked salmon, canned salmon, whole pink salmon over there,” he gestures to rows of neatly packaged pink salmon meat.

Knutson’s in the business of catching fish, not testing them. But after the Fukushima meltdown his customers wanted answers about the safety of his product.

So he sent seven salmon samples off to an internationally certified lab to test for radioactive isotopes. Five of the seven samples came back without any detectable levels of radioactive isotopes from Fukushima, Knutson said, and two showed levels several hundred times below approved levels.

“We feel very good about the results,” he said.

The tests cost Knutson $1,200 but he says it was a necessary investment.

“People do not trust governmental authorities. They don’t trust corporations. They don’t trust explanations and they don’t have a good science background,” Knutson said. “So it makes for a good combination where rumors can start spreading like wildfire, rumors like the whole pacific is poisoned, rumors like starfish, salmon seals, they’re all poisoned from the radiation and it’s not true. This is not definitive proof that there’s not a problem but it’s an indicator.”