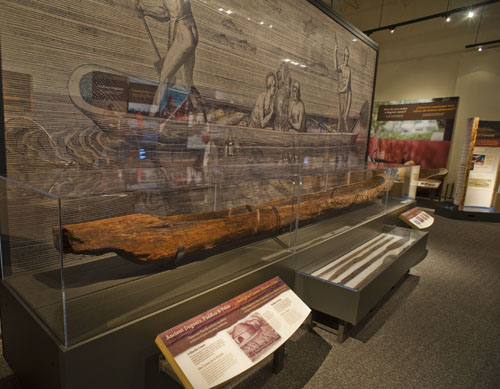 This 400-year-old pine dugout canoe will be on display Sept. 27, 2014, through May 2015 at the Chickasaw Cultural Center as part of “Dugout Canoes: Padding through the Americas.”

SULPHUR, Okla. – In spring 2000, a group of Florida high school students stumbled on the largest treasure trove of ancient dugout canoes ever discovered.
It is believed the Eastside High School students discovered 101 canoes. Some of the vessels are fully intact. Many are mere remnants. When radiocarbon dating was completed, scientists estimated the age of the vessels varied between 500 and 5,000 years old.
What emerged from the discovery is “Dugout Canoes: Paddling through the Americas,” a landmark exhibition to be hosted by the Chickasaw Nation at its expansive Cultural Center in Sulphur from Saturday, Sept. 27, 2014, through May 6, 2015.
The world-class exhibit will open on the same day as the 54th Annual Chickasaw Meeting and 26th Annual Chickasaw Festival gets underway throughout several sites in the 13-country tribal territory.
Dugout canoes were metaphorical pickup trucks for Native Americans. They transported food, family, tribal members, warriors and trade goods. The vessels made travel of great distances possible for Native people.
While none of the 101 dugout canoes discovered by the Gainesville, Florida, students in drought-stricken Newnans Lake 14 years ago will be displayed, ancient vessels recovered from other sites in America may be viewed, studied and researched.
The exhibition tells how infinitely important canoes were to Native Americans; how they were crafted sans modern tools and the exhaustive effort it required to build one seaworthy and with stability.
A 2011 article in The Wall Street Journal makes it clear unearthing the 101 dugout canoes from Newnans Lake would have destroyed the precious crafts. For hundreds of years, the site was covered with ample amounts of water and then exposed to the elements during periods of drought. This see-saw effect degraded the Southern hard pine canoes. In order to fully save them, an inordinately expensive process must be undertaken.
Today, according to the Journal, the dugout canoes are submerged in about 5 feet of water, encased in a protective layer of mud.
A magnificent dugout, almost 19 feet long, will be on display. It was discovered near Gainesville and is the show’s centerpiece that dates to approximately 400 years ago. It is made of pine and has a slightly raised bow and stern. A paddle was discovered with it. Other ancient examples of dugout canoes will be available for viewing.
The exhibit, with various artifacts, shows how Native Americans hunted and fished from the vessels and how they used them for other purposes.
Photos and short videos will also show the high school students’ Newnans Lake excavation and research, how vessels contained in the exhibit were preserved so they could be presented to the public and methods used to construct them by ancient people.
“Dugout Canoes: Paddling through the Americas” will be open to Chickasaw Cultural Center patrons during normal business hours.
The Cultural Center opens at 10 a.m. Monday through Saturday and at noon on Sundays. It closes daily at 5 p.m. The center is closed on all federally-recognized holidays.