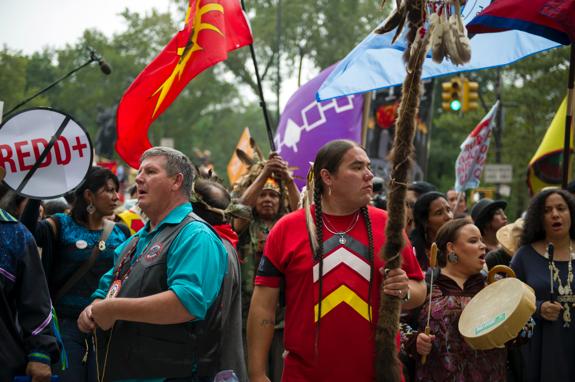 After it was announced Tuesday evening, that the Keystone XL Pipeline bill had been rejected by the US Senate – just one vote shy of the needed 60 yes votes – the poignant sound of Native American Indians’ joy/relief filled the Senate Chamber.

After the House passed the bill last week, Rosebud Sioux President Cyril Scott, expressed his outrage and was quoted in “Indian Country Today,” stating, “The House has now signed our death warrants and the death warrants of our children and grandchildren. The Rosebud Sioux Tribe will not allow this pipeline to cut through our lands. We are outraged by the lack of intergovernmental cooperation. We are a sovereign nation, and we are not being treated as such. We will close our reservation to Keystone X. Authorizing Keystone XL is an act of war against our people.”

The 100-member House Chamber on Tuesday cast 59 aye votes on a version of the bill that was sponsored by Sen. Mary Landrieu (D-LA). Landrieu had been urging fellow Democrats to support the bill. The TransCanada Corp’s Keystone XL Pipeline has support in oil-producing Louisiana, an oil-producing state, where Landrieu is facing a run-off election in December.

Senator Angus King, an independent from Maine, had been thought a possible 60th “yes” but had said on Tuesday he would vote no. “Congress is not – nor should it be – in the business of legislating the approval or disapproval of a construction project,” King stated in a presss release.

Energy companies say the pipeline would create jobs as 800,000 barrels of oil would be transported 1,700 miles from Alberta to the Gulf Coast. But environmental groups point out that the oil is simply crossing the nation, not creating anymore than 50 or so jobs within the United States and they point out the irony of a nation advocating for clean energy while approving a pipeline through the heart of the nation.

On its web site the League of Women Voters states: “The XL Pipeline will threaten the safety of our drinking water, promote a bad energy policy and increase the greenhouse gases in our atmosphere that contribute to climate change. This pipeline is a risky adventure that is not in our national interest. “

Within the US Senate Chamber, upon the announcement that the bill had been rejected, that joyous sound of indigenous people’s reaction in the gallery was met with the sound of Sen Elizabeth Warren’s (D-MA) gavel and call for order. It was a victory for the Rosebud Sioux Tribe to have stood up for their nation against the bill that aimed to slice right through lands promised them by US Treaty and that ignored any affect on the Sioux and other indigenous people. It was also a victory for environmental groups and grassroots organizations and the American public. But one cannot help but feel the uncomfortableness of reaction to the Native American Indians chant. Three women and two men were arrested outside the US Senate Chamber after expressing their relief and joy. One would think the rejoicing of Native American Indians’ defeat over a land grab would be something all Americans would rejoice along with. There is something unsettling about American Indians’ cry of relief resulting in their arrest. At the time of this writing, however, there were no charges.

About Chris Sagona: Chris is the National Elections Director for UniteWomen.org. She has covered religion, crime and foreign news as reporter, managing editor, associate producer and foreign news editor for Fox News Channel, News12/CNN affiliate and Community Life, and has been published in The Herald News and The Record. She’s won Press Awards from the Society of Professional Journalists and the Press Association for Best Feature Writing, Best Deadline Reporting, Best Breaking News Reporting and Excellence in Journalism for Distinguished Public Service.