CORNING, Calif. (AP) – A federal judge has banned guns from a Native American casino in Northern California that is at the center of an escalating tribal dispute, citing a potential threat to public safety.

The judge stopped short of closing the $100-million-a-year casino, as one faction had requested, until the battle over who controls the tribe and its resources is resolved. The factions were scheduled to meet for mediation Friday, the Sacramento Bee reported.

The office of Attorney General Kamala Harris filed for the restraining order Tuesday to prevent any public safety threat after both sides hired armed personnel on the casino grounds. The weapons ban extends to tribal properties around the casino, including nearby hotels and an RV park.

The two rival security groups faced off on casino grounds June 9 as deputies from the Tehama County Sheriff’s Department had to intervene, Assistant Sheriff Phil Johnston said. Deputies spent a week at the casino trying to keep the peace, he said.

Sheriff Dave Hencratt said Friday that his department has removed a command post, as he hopes the factions will be able to reach a conclusion. He said, however, that the department would enforce the restraining order if necessary.

“We all want this to be resolved peacefully,” Hencratt said.

Tensions arose in April when the tribe’s general council voted to remove more than 70 members from the tribe’s rolls. The dispute centers around who qualifies for membership and the $54,000 a year in casino payments, as well as trust funds and scholarships for children.

Those taken off the rolls included three members of tribe’s governing body. They were recently reinstated – even though they have been barred from entering the casino under orders from tribal chairman Andy Freeman.

Information from: The Sacramento Bee, http://www.sacbee.com 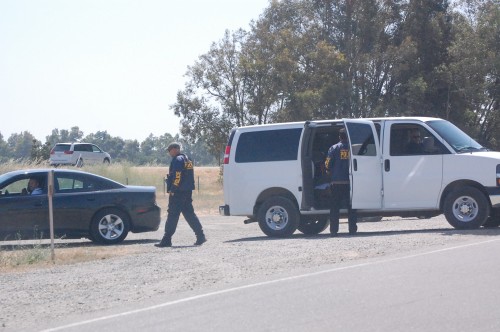 A Tribal Police force took up positions around Rolling Hills Casino in Corning June 9 and remained in a standoff with casino security guards for a week before leaving the grounds on Monday. (DAILY NEWS FILE PHOTO)

Calls situation imminent threat to the public health and safety

SACRAMENTO >> The California Attorney General’s Office asked the federal court system Tuesday to grant a temporary restraining order and other protection orders in the tribal dispute over Rolling Hills Casino.

The complaint for injunctive and declaratory relief was filed in the US District Court for the Eastern District of California and also asks for a finding that the tribe has breached its gaming license contract.

The complaint says the state of California is seeking emergency and other appropriate injunctive relief to prevent an imminent threat to public health and safety resulting from opposing tribal factions of the Paskenta Band of Nomlaki Indians dueling claims to control of Rolling Hills Casino.

Among the relief requested is for a temporary restraining order providing any tribal faction and hired officers, agents and employees to attempt to take control of the casino and a ban of armed personnel of any nature within 100 yards of the casino or on tribal properties.

The complaint also asks the court to find the tribe has materially breached its compact with the state to operate a class III gaming casino.

The complaint says that compact was and is currently being breached because the safety of patrons and employees has not been ensured.

The complaint quotes email exchanges from government officials and attorneys advising of the unfolding situation of the ousted Tribal leadership attempting to gain control of the casino through force.

An armed “Tribal Police” left the casino grounds Monday, after a week-long standoff with casino security.

Tehama County Sheriff’s deputies have stayed at the casino since June 9.

The standoff reached its peak June 11 when the four ousted members of the Tribal Council attempted to enter the casino and were kept out by casino security and about 100 tribal members aligned with Andrew Freeman.

Casino operations have continued despite a cease and desist letter sent by the Bureau of Indian Affairs that recognized the four ousted members as part of the last uncontested Tribal Council.

The remaining tribe has filed an appeal of that decision.

Demand Tribal Council makeup be put to a vote 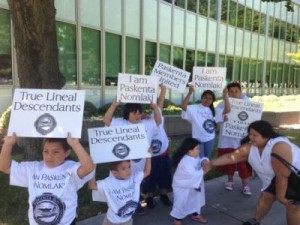 Courtesy photo Members of the Paskenta Band of the Nomlaki Indians delivered petitions Thursday to the Central California office of the Bureau of Indian Affairs.

SACRAMENTO >> Around 120 members of the Paskenta band of Nomlaki Indians, led by Chairman Andrew Freeman, traveled by bus Thursday to deliver petitions to Central California Superintendent of the Bureau of Indian Affairs Troy Burdick calling for affirmation of a Tribal Council elected in May.

The group is demanding the BIA allow the tribe to exercise its sovereign right to determine the tribe’s governing body, according to a press release issued Thursday morning.

The move comes in response to a letter Burdick issued Monday recognizing Freeman and four ousted members of the tribe as the last uncontested, duly elected Tribal Council.

A “Tribal Police” force of about 30 armed men in uniform representing the ousted members attempted early Monday to shut down Rolling Hills Casino, which is owned by the tribe and remains open under those aligned with Andrew Freeman. Armed security employed by the casino prevented the shutdown, but a standoff continues at the Corning property.

The tribal members aligned with Andrew Freeman claim the tribe’s constitution allows the voting members of the tribe to submit 30 percent of their signatures in order to propose legislation for the tribe. The signatures of members were gathered to be submitted to Geraldine Freeman, whom Burdick’s letter recognizes as secretary.

Upon receipt of the signatures, the BIA is prohibited from interfering with or disrupting the tribal process, thereby allowing the tribe to resolve the dispute pursuant to the tribe’s own governing documents and processes, the release said.