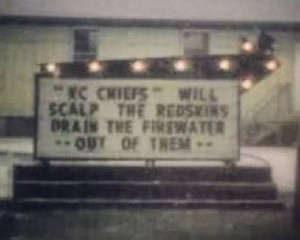 This sign was Version II: Attempt to rectify Version I

BELTON, MISSOURI – As if the first sign was not bad enough, an attempt to fix an obvious racist message on the portable sign at the local Sonic Drive-In in Belton, Missouri on Sunday was not much of an improvement.

Apparently, someone told the author of the sign, it was offensive to American Indians.

“‘KC CHIEFS’ WILL SCALP THE REDSKINS

DRAIN THE FIREWATER — OUT OF THEM”

The second version – while slightly blurry – was posted on a Twitter account. Social media has kept this story alive.

The response from Sonic’s Patrick Lenow, vice president of media relations for the 3,500 chain:

“There were two offensive, wrong messages posted. Our understanding is that the first was displayed for about 15 minutes and a poor attempt to rectify it was posted for about 10 minutes, so both were part of the same incident. Both messages are unacceptable and contrary to the values of our company. Sonic and the local owner are sorry that such unacceptable messages were posted for any duration and are working through a process to prevent any type of reoccurrence.”

When the Native News Online yesterday contacted Mr. Lenow and Robert Stone, franchisee of the Belton Sonic, neither of the two revealed there were two different messages.

Mr. Stone indicated he would not fire the employee who posted the sign, but would educate his entire staff about what is appropriate.