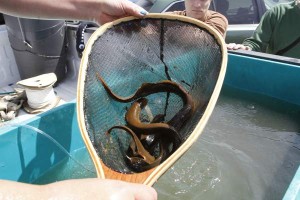 WHITE SWAN, Wash. — After being largely absent for nearly a half-century, an old friend of the Yakamas — the Pacific lamprey — is being reintroduced to its home waters in the Yakima River basin.

On Tuesday, a handful of Yakama Nation biologists released 44 of the prehistoric, eel-like creatures into Toppenish and Simcoe creeks, where they have not been seen since the 1970s. The move is part of a larger project to restore the once vibrant Pacific lamprey not only in the Yakima River basin, but throughout the Northwest.

“This reintroduction is definitely a sacred time for our tribe,” project manager Patrick Luke said just before the release of adult lamprey into Simcoe Creek. “It’s just one step in a larger restoration project.”

After decades of considering lamprey a parasite that merely fed on other fish, federal and state authorities are now heeding what Northwestern tribes have long said — lamprey play an important role in the ecosystem and subsequently improve the survival rate of other species, such as salmon. Roughly 50 years ago, dams began blocking lamprey — which spend roughly two years in the ocean — from much of the Columbia River and its tributaries. With the ancient creature facing extinction, five states, along with federal agencies and several tribes, have embarked on a massive restoration project.

As part of a historic 10-year, $900 million fish-restoration accord the Army Corps of Engineers reached in 2008 with four Columbia River tribes — Yakama, Umatilla and Warm Springs — $5 million a year is being spent on lamprey restoration.

Although another species of lamprey is present in the Yakima River basin — Western brook lamprey that do not migrate — Tuesday’s release was the first significant step taken by the tribe to revive this anadromous creature to its ancestral waters, where they will spawn and hopefully return.

Although the cultural significance of the salmon to the Yakamas is generally understood, that of the lamprey has long been overlooked. They too were a staple in the diet.

Lamprey bring nutrients from the ocean to rivers and streams when they return to spawn. But lamprey also help protect salmon: Because they have a richer oil, birds and other predators usually feed on them first, biologists said.

“It’s a wonderful day for the lamprey and it’s also exciting for all the other species in the ecosystem,” said biologist Ralph Lampman.

Lamprey begin life as larvae and grow to about 2 feet long. Adults return to areas where they smell the baby larvae, Luke said. And the larvae offer nutrients as well, he said.

“What worms do in the ground is what lamprey do in the water as larvae,” he said.

Called asúm by the Yakamas, lamprey have existed for 450 million years and predate dinosaurs, according to fish biologists.

They once were prevalent throughout the Northwest, said Luke, who fished for them as a child.

“There would be so many, they’d turn the water black,” he said of the creature with a disk-shaped mouth lined with tiny, pointy teeth. “They used to call it the maiden hair.”

The lamprey released Tuesday were plucked from The Dalles and John Day dams, which they rarely make it past, and kept at the tribe’s hatchery in Prosser, project leader Luke said.

Hatchery supplementation will be used to restore lamprey, but the goal is to rebuild a natural run, he said.

Like a sucker fish, lamprey latch onto rocks to move through swift currents and to navigate falls. But when fish ladders were installed at dams, the lamprey wasn’t considered, Luke said.

Lamprey cannot make their way past the sharp corners of the weirs in fish tunnels and ladders. They need rounded edges they can move around, he said.

At the request of Columbia River tribes, the Corps of Engineers began looking at lamprey before the historic accord was signed, and installed two lamprey ramps at Bonneville Dam in 2002. Similar structures, which aren’t cheap, would need to be installed elsewhere throughout the Columbia and Yakima river basins to improve lamprey survival, Lampman said.

“That’s a really hard fix,” he said. “That’s not going to happen overnight.”

Meanwhile, efforts to use hatchery-raised lamprey and to relocate wild lamprey pulled from the lower Columbia River will continue, Luke said.

Today, Yakama biologists will release another group of lamprey into Satus Creek southeast of Toppenish. And next week, another release will occur at Ahtanum Creek near Union Gap.

“That’s why it’s so important,” he said. “We’re not going to win this war with giant steps — it’s going to be a lot of little steps.”

Editor’s note: This story has been updated to correct that the Nez Perce are not part of the accord with the Army Corps of Engineers.