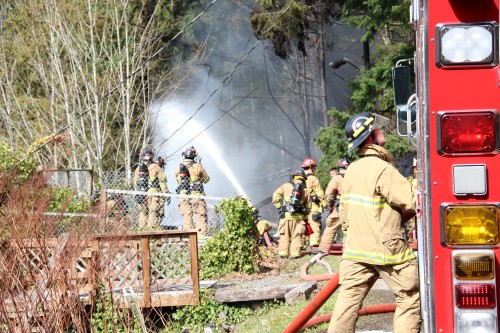 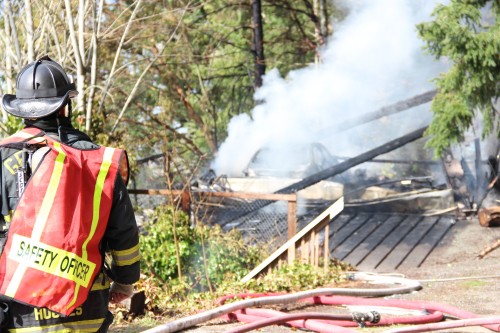 With limited water, fire crews were able to extinguish the fire, but not until the structure was almost completely gone. Andrew Gobin/Tulalip News

“There was nothing left of the roof, the walls were almost completely gone, the metal door had melted down, and the car was gone,” said Tulalip Bay Fire Chief Teri Dodge.

Water tenders brought water down the one-lane access road, because there are no hydrants in the area. After extinguishing the fire, crews sprayed foam on the scorched remains to prevent accelerants from reigniting the blaze.

Dodge explained, “Garage fires tend to burn very quickly. Once the fire breaches the roof or the walls, the oxygen feeds it. Most garages have accelerants inside as well, which make garage fires that much more devastating.”

In addition to limited access and limited water, there was a downed power line that crews had to work around until  Snohomish County PUD was able to cut power to the line.

The garage burned completely to the ground, leaving only the floor and what remained of the vehicle inside. 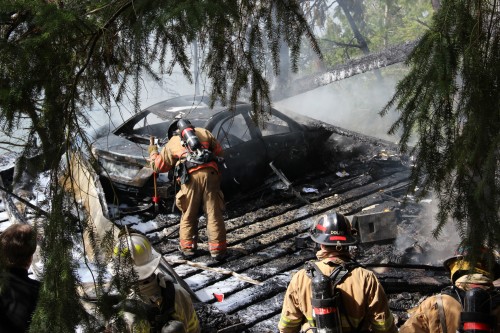 Firemen test the burnt out floor to reach the remains of the vehicle. Andrew Gobin/Tulalip news

The fire was discovered by homeowner Heidi Atterson who then called 911. Her husband, Steve Atterson, arrived on scene shortly there after. The cause of the fire has yet to be determined, though it is suspected to have began as an electrical fire. 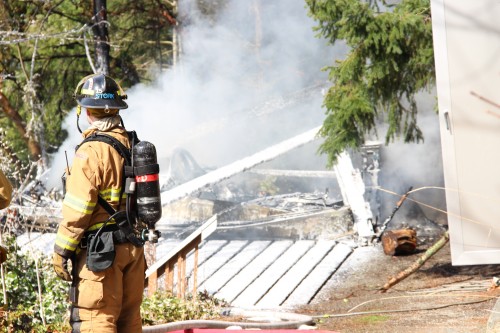