PHOENIX (Reuters) – A dude rancher in a bitter dispute with a Native American tribe over access to a Grand Canyon tourist attraction was briefly arrested after confronting crews building a road near his property, a tribal spokesman said on Thursday.

Nigel Turner, the British owner of the Grand Canyon Resort dude ranch in Arizona, was taken into custody on suspicion of one count of trespassing by a Hualapai Tribe police officer on Tuesday. He was accused of entering the site despite earlier warnings, said tribal spokesman Dave Cieslak.

The tribe is paving the road on federal land adjacent to Turner’s property to provide easy access to its Skywalk project, a glass-bottom viewing platform that juts out over the crimson-hued canyon’s West Rim and attracts upwards of 1,000 tourists a day.

Turner is a Nevada businessman and ex-British Army helicopter pilot who a decade ago bought his property which today provides visitors with the experience of living on a Western ranch. He has been in a dispute with the tribe stemming from a four-year easement to his property he granted in 2007.

The fight escalated in May when Turner began charging tourists to enter the road that runs briefly through his property and later blocked access to the road altogether.

Tribal officials then built a new stretch of road that bypasses his property, and were working to complete a bigger project to finish a paved road to the Skywalk.

Cieslak said Turner was warned by security personnel not to enter the site, but did so anyway and began yelling at workers. He was arrested by a tribal officer on scene.

He complained of chest pains while en-route to a local county jail, and was treated and released at the Kingman Regional Medical Center, Cieslak said. He was cited but not taken to jail.

“He was treated with the utmost respect and all statewide police policies and procedures were followed,” Cieslak said.

Turner disputes the tribe’s account of the incident, saying he was concerned about crews using explosives so close to where his resort guests were staying. He said he asked politely to speak to the construction foreman and was quickly handcuffed.

He said he was then placed in a small space in the back of a car without air-conditioning, and that he asked to be flown to the hospital, but was taken by ground ambulance instead.

“My own cowboys would be arrested for treating animals the way they treated me,” Turner told Reuters. “What they did to me violated my civil rights.”

There was no immediate decision on whether charges would be filed by the Mohave County Attorney’s Office.

An alternate route to Grand Canyon Skywalk opened Tuesday afternoon, bypassing a portion of the main road to the Hualapai Tribe attraction that was barricaded last week by a dude rancher who said his business was harmed by tourist traffic cutting through his property.

The Hualapai Tribe obtained a permit Tuesday morning from the U.S. Bureau of Land Management that allowed crews to complete the final grading of the bypass route on federal land near the dude ranch.

In a statement issued by the tribe, Chairwoman Sherry Counts thanked U.S. Reps. Ann Kirkpatrick, D-Arizona, and Paul Gosar, R-Arizona, for their influence in fast-tracking the permit process.

“These elected officials took a stand for tourism and for the safety of all visitors to the Grand Canyon,” Counts said. “On behalf of the Hualapai people, and the thousands of tourists who come to this region every day, I’m very grateful for their leadership.”

Turner closed Diamond Bar Road to tourist traffic on June 5 to protest what he claims is the federal government’s failure to abide by the terms of a 2007 settlement involving a permanent road now under construction. In May, he asked a federal judge to enforce the terms of the settlement. A ruling is expected later this week.

Scores of tourists over the years have driven the unpaved, winding road through Turner’s ranch. Unless arriving by air or four-wheel drive, visitors have had no other option but to take Diamond Bar Road to reach the West Rim of the Grand Canyon.

Visitors accessed the road for free until May 25, when Turner began imposing a toll on the one-mile stretch that crosses his property. Armed guards had been enforcing the toll of $20 per person or $500 per tour bus.

Turner contends that he is well within his rights as a private landowner, and that his business has suffered as a result of the traffic and the noise from construction of the new permanent road. The working dude ranch attracts between 400 and 500 visitors a day and accommodates about 40 overnight guests, many from overseas, Turner said.

He was arrested last week on a misdemeanor count of threatening and intimidating. His arrest stemmed from an incident with a construction worker near the roadblock. Turner was released within hours after posting bond.

If you want to look straight down at one of the Seven Wonders of the World, be sure to take a wallet full of cash. 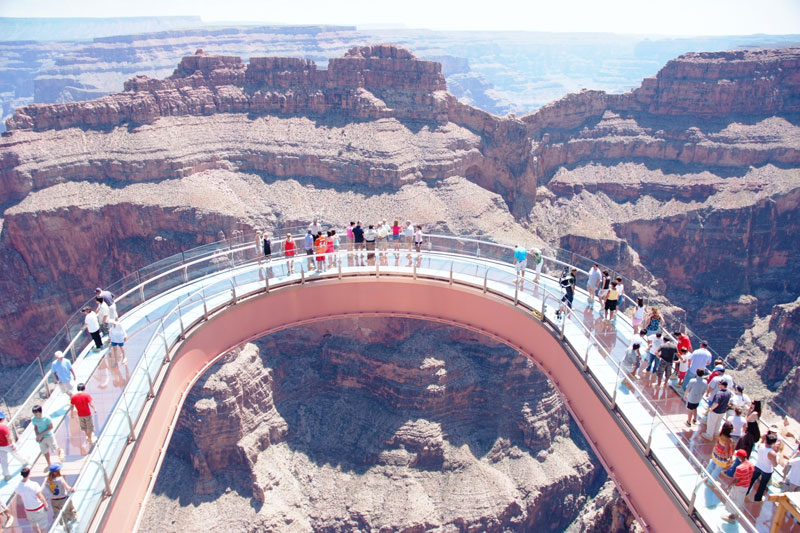 The glass-bottomed Skywalk at Grand Canyon West, a horseshoe-shaped bridge that juts out from the Canyon walls some 70 feet into pure, empty space, has seen its share of difficulties since long before it opened in 2007. The Hualapai Tribe, which owns and operates the tourist attraction, has battled forces both internal – factions within the tribe argued that the structure was defiling sacred ground – and external. Environmentalists believed the bridge was an incongruous eyesore and the original developer of the $31 million project, Grand Canyon Skywalk Development of Las Vegas, won a $28 million judgment against the tribe. The court agreed with David Jin, creator of the spectacle, who maintained that his contract called for GCSD to receive half of the attraction’s revenue in return for fronting the money to build it.

Shortly after the Skywalk opened, though, the tribe took it back from Jin’s company, claiming GCSD hadn’t finished the job. Jin countered by blaming the lack of completion on the tribe’s failure to provide infrastructure, and the back-and-forth ultimately resulted in the tribe’s choice to invoke eminent domain and seize the bridge.

The loss of the court battle earlier this year was a huge blow to the Hualapai, who have seen other business ventures fall by the wayside on their sprawling reservation south of the Canyon and west of the National Park.

This past weekend, a neighbor dealt the tribe another blow. Nigel Turner, owner of the 168-square-mile Grand Canyon Ranch, said he was tired of the tourists and the traffic that crossed his land on the way to the Skywalk, and that’s why he decided to start charging a $20 toll. For that fee, tourists, primarily those coming from Las Vegas, can enjoy a rodeo show and other ranch activities, but the already hurting tribe says the charge is inappropriate, based on a 2008 settlement that netted Turner $750,000 and gave the tribe an easement across his land.

Once again, the Hualapai and their ambitions seem certain to be headed for court in this dispute. It’s hard to say which side has right on its side, but it certainly begs the question of whether the tribe’s minority was right in objecting to the building of the attraction in the first place.