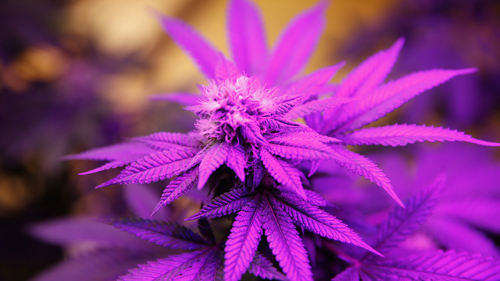 At the very first Tribal Marijuana Conference held last weekend in Tulalip, WA, the former chairman of the Moapa Paiute tribe, William Anderson, tall and dignified and walking with a cane, explained to me what brought him: “I was just laying in bed in pain. I couldn’t get up, I couldn’t get up to go to the bathroom or go to the kitchen because I was in so much pain.”

An infection in his foot had spread to his spine and deteriorated the bone, exposing nerves. Doctors replaced the bone with titanium steel. For two years, the infection, even with prescription creams and antibiotics, kept coming back. The Indian Health Service recommended amputation of his foot.

Then he remembered a documentary he had seen years earlier about medical marijuana, and how it was used by cancer patients for pain relief. He ordered a topical cannabis ointment, and when he applied it he felt immediate relief.

The conference brought together some 75 tribal representatives, along with hundreds from the state and federal level in addition to cannabis industry leaders on the Tulalip tribe’s $200 million resort and casino in Washington state. This was in response to a Department of Justice memo directing US attorneys nationwide not to prosecute federally-recognized tribes conducting marijuana-related businesses on reservation land—so long as they meet nine criteria, including the prevention of criminal elements from profiting from marijuana sales, and keeping cannabis products away from minors.

While most of the presentations at the conference addressed the legal, infrastructural, and financial concerns of running a marijuana business on the reservation, Anderson’s story highlights the incredible medical needs faced by many tribal members.

Native Americans have the highest rates of high-risk drinking and suicide of any American ethnic group, according to research from the NIH and CDC, respectively. In the past two decades, opioid deaths and cancer rates have continued to climb. On Anderson’s reservation, tribal members’ health had been harmed by a coal power plant that blew coal ash through their community; its waste ponds poisoning their ground water. They fought back and shut down the plant, but this story is all too common throughout “Indian Country;” Native American communities pay a heavy price, both in regards to environmental and public health, for US energy development.

Amanda Reiman, manager of marijuana law and policy at the Drug Policy Alliance, assured tribal leaders at the conference that cannabis could actually help Native American communities battling addiction. A recent study (paywall) found that marijuana acts not as a “gateway drug,” as it is often characterized, but as a less harmful replacement for alcohol. In states that have legalized medical marijuana, the researchers found that the number of alcohol-related traffic fatalities per year decreased by as much as 11%. It is estimated that, in the United States, alcohol-related deaths total 88,000 per year. The statistics are even more dire for Native American communities: nearly 11.7% of Native American deaths are alcohol-related, compared to 3.3% for all Americans.

Another study published just last year in JAMA Internal Medicine found that opioid mortality rates were lower by 25% in states that had legalized medical marijuana. Native Americans have seen opioid-related (prescription painkiller) deaths increase since 2000 to a rate that is 3 times that of African-Americans and Hispanics, according to the CDC. Nationally, these drugs now kill more people than car crashes.

As the medical establishment has reigned in opioid over-prescription, patients who had become addicted to painkillers have increasingly turned to heroin—once associated with big cities, but now a booming trade in poorer, rural areas. Last week, the Saginaw Chippewa tribe in Michigan banished two tribal members for trafficking in heroin. On Feb. 20, a couple from the Lummi tribe in Washington state were sentenced to prison for conspiracy to distribute heroin and methamphetamine.

“Heroin and methamphetamine trafficking has no place in any of our communities, least of all on tribal lands,” said acting US attorney for the Western district of Washington, Annette L. Hayes. “Last week I convened a heroin summit to focus community resources on battling what has become a growing epidemic of opioid abuse. I commend the work of our tribal partners, the Lummi, to lead in the effort to prevent heroin use and overdose deaths.”

Meanwhile, yet another study made headlines after finding marijuana to be 114 times less deadly than alcohol. Alcohol, followed by heroin and cocaine, was found to be the most dangerous recreational drug. Tobacco came in fourth, and cannabis a distant last.

With all the research and evidence regarding the safety and innocuousness of marijuana piling up, it is no wonder that the federal government has taken baby steps to revise its once harsh prohibition of the drug. For example, a US district judge in Sacramento, CA, heard the final arguments on Feb. 11 on a hearing regarding the constitutionality of the 1970 Controlled Substances Act that classified marijuana as a Schedule 1 drug. This is the first reconsideration of the act’s claims that marijuana has “no accepted medical use”—a rather foolish assertion considering that that 23 states and the District of Columbia now permit the distribution and consumption of medical marijuana. She is expected to rule within the next week.

Still, many Native Americans, long used to fighting addiction in their communities, see the opportunity for the sale of marijuana on their lands as yet another Trojan horse delivered by the US government. They worry about its implementation.

Troy Eid, chair of president Obama’s Indian Law and Order Commission was cautious. “I think it is very good for tribes to look at and think about how they might want to influence changes in the federal law,” he said. “Having said that, there are no changes in federal law here. I can tell you as a former US attorney, the nine different criteria that they laid out are not sufficient to provide protections to tribes or tribal members, tribal citizens. So, you are really rolling the dice.”

For Native American communities, the issue of marijuana legalization represents both unique challenges and prospects for success. It hinges on careful negotiation with multiple federal agencies, from the DEA to the IRS. The unique relationship federally-recognized tribes have with the US as “domestic dependent nations”—a designation that recognizes both the inherent sovereignty of pre-existing indigenous nations, but also reflects the power of the US to limit the exercise of that sovereignty—is a careful dance that tribes have had to conduct with the most powerful nation in the world for decades; and this new opportunity may serve as a long-awaited chance to restructure that relationship, just as casino-gaming did a generation ago.

“This issue was a historic moment for the United States,” Robert Odawi Porter of Odawi Law PLLC, a former president of the Seneca Nation of New York, and one of the organizers of the conference explained to me, “and what the Justice Department did was to invite ‘Indian Country’ to have a historical moment. No different than any other major decision our ancestors have had to make. Tribal leaders are now going to have the same opportunity to think through whether legalizing marijuana was a good thing.”

The conference ended with tribal leaders agreeing to meet again in Las Vegas on Mar. 12 at the Reservation Economic Summit to vote on a charter for a new inter-tribal cannabis trade organization.

Douglas Berman, a presenter at the conference, and a professor of law at Ohio State University, noted, “There are relatively few industries with so many novel dimensions to it that haven’t already gotten commercialized to the point it is difficult for new players to enter.”

“I think tribes can be first to market here. I really do,” said Hilary Bricken, a cannabis attorney in Washington state, and another of the organizers of the conference. She urged tribes to consider entering the marijuana banking services industry. Although Bank of America has agreed to handle Washington state’s marijuana tax income, only small credit unions have taken on lending to legal, licensed marijuana businesses. A few tribes have gotten involved as payday lenders, but full realization of reservations as “off-shore banking” magnates on the mainland US has not yet occurred. A niche banking services market like marijuana could provide the impetus.

Les Parks, vice chairman of the Tulalip tribe’s board of directors, shared a video of a local Seattle television-news report on the medical marijuana extract CBD, which is used to relieve epileptic seizures and hold big dreams for tribes in the pharmaceutical industry. “We can lead this country in CBD drug development and be the next big pharmaceutical company,” he said.

A number of Native Americans came with cannabis company partners to the conference. William Anderson was one of them. He is working with Strainz, a medical cannabis products and services company.

“This cannot just be about making a quick buck, but about economic development and being more independent, not dependent on the government, which I don’t like but is unfortunately the reality for our people,” Anderson explained.

As a former tribal chairman, he’s had experience doing just that. Under his leadership, his tribe not only got rid of the coal plant, but opened the first solar plant on any reservation in the country, and has since been approved to build a second.

But in the end Anderson is a believer in the power of medical marijuana to help Native American people deal with chronic pain. “I’m really grateful to be here today, to just talk and to shake hands with people,” he said. “This is what I want to bring to Indian people out there. To show that there are other ways to get help.”