By John Stark, The Bellingham Herald

DEMING – The 306 people facing loss of Nooksack Indian Tribe membership have won a round in tribal court, getting a judge to order the tribal council to stop its latest effort to oust them.

The Thursday, June 12, ruling from Tribal Court Chief Judge Raquel Montoya-Lewis stems from a March 2014 Nooksack Court of Appeals ruling. The appeals judge panel had ordered a halt to the process of removing people from tribal enrollment rosters until the tribal council could draw up an ordinance spelling out the procedures for stripping people of tribal membership. Such an ordinance also would require approval from the U.S. Bureau of Indian Affairs, the appeals court ruled.

But in mid-May the tribal council began sending out new notices to some members of the affected families, scheduling July disenrollment hearings before the tribal council under the terms of a 2005 tribal membership ordinance that received BIA approval in 2006. Gabe Galanda, the Seattle attorney representing the threatened families, went back to court to challenge the legality of that maneuver.

After an earlier hearing, Montoya-Lewis agreed that the tribal council was out of bounds.

“This approach appears to be an attempt to circumvent the very clear holdings of the Court of Appeals,” Montoya-Lewis wrote.

While the judge’s ruling delays the move to strip the 306 of tribal membership, it likely will not stop it. There appears to be no legal obstacle to the process, once the tribal council passes the necessary ordinance and gets federal approval. Nooksack Tribal Council Chairman Bob Kelly, who has pushed for the disenrollment, was recently reelected and has the support of a majority of council members.

The disenrollment controversy began in early 2013 after Kelly and a majority of other council members agreed that members of the Rabang, Rapada and Narte-Gladstone families had been incorrectly enrolled in the 2,000-member tribe in the 1980s, and their enrollments should be revoked.

Since then, members of the affected families have mounted a vigorous legal and public relations effort to retain their Nooksack membership. That membership entitles them to a wide range of benefits, among them fishing rights, health care, access to tribal housing and small cash payments for Christmas and back-to-school expenses.

Those facing the loss of tribal membership have based their membership claim on their descent from Annie George, who died in 1949. Members of those three families have introduced evidence that Annie George was Nooksack, but those who want the three families out have noted that George’s name does not appear on a list of those who got original allotments of tribal land or on a 1942 tribal census, and those two criteria determine legal eligibility for membership. 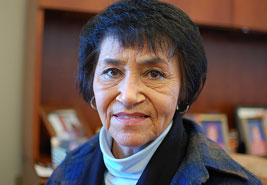 When Erma Vizenor was first elected to the office of secretary-treasurer at White Earth in the late 1990s, she promised she would work toward constitutional reform. Voters approved that reform last night. (Tom Robertson/MPR News file)

The new constitution eliminates the blood quantum which requires a person to prove they have 25 percent Indian blood and changes to a system based on family lineage. But choosing a new constitution is only the first step in what will likely be a long and challenging process.

White Earth Nation Chairwoman Erma Vizenor has advocated for constitutional reform for 16 years, and said Tuesday that when 79 percent of voters approve a new constitution, as they just did with 3,492 votes cast, it’s a transformational moment.

“It feels great. It is gratifying to know that the people of White Earth have spoken and spoken strongly,” Vizenor said.

The new separation of powers will help create economic stability on the northern Minnesota reservation, Vizenor said. “If we look at all the research on economic development in Indian Country, to diversify the economics of the reservation is dependent on an independent judicial system.”

But first, White Earth needs to resolve a conflict its new constitution sets up with the Minnesota Chippewa Tribe which is the governing body of six bands. The Red Lake Nation is independent of the MCT.

“There’s some significant differences between the current MCT structure and this new proposed constitution and so they’re going to have to engage a process with MCT to figure out how they’re going to resolve those differences to allow White Earth to remain a part of MCT,” Janis said. If those differences can’t be resolved, White Earth would need to decide if it will withdraw from the MCT. The issue will be discussed at a Minnesota Chippewa Tribe meeting next month.

Vizenor said she’s confident an agreement can be reached because the numbers are on the White Earth band’s side: Its members make up more than half of the Minnesota Chippewa Tribe.

Once membership in the MCT is resolved, White Earth will schedule an election for a president, members of the legislative council and a chief judge. Those new elected officials will then create the laws that define the new government roles based on the new constitution.

That might well be a process fraught with challenge according to James Mills, a consultant who helps tribes across the country with constitutional reform. He has not worked with White Earth, but said he’s helped about 50 tribes write or amend constitutions. In his experience, reform sometimes creates a power struggle.

“When someone writes a constitution that divides the powers between the three branches, if they’re not clear about who does what and when, the executive and legislative will often argue over whose authority it is and I’ve seen them just become stagnant as a result,” Mills said.

Vizenor said she knows the path forward is filled with challenges, but she says tribal members have given a mandate for change and she expects the transition to be successful.

How long that transition will take is unclear. Vizenor says she hopes new elections can be held within a year.

After getting another rebuff in tribal court, Nooksack Indians facing loss of their tribal membership have filed a new lawsuit in U.S. District Court in Seattle.

Seattle Attorney Gabriel Galanda filed the federal suit Monday, June 17, on behalf of Rudy St. Germain and Michelle Roberts, two tribal council members who are among the 306 who could be stripped of their tribal membership because the validity of their Nooksack lineage has been called into question.

The suit declares that the move to purge the 306 is based on “racial animus,” because all 306 are part-Filipino. That charge is hotly denied by Nooksack Tribal Chairman Bob Kelly and his supporters, who have noted that many other Nooksacks have Filipino ancestors but can demonstrate their Nooksack lineage in a way that meets the requirements of tribal law.

But as Galanda and his clients see it, Kelly and the other five members of the council are in the process of changing that law to keep them out.

The Bureau of Indian Affairs of the U.S. Department of the Interior is currently supervising a mail-in constitutional amendment election that could make it more difficult to qualify for Nooksack membership. Kelly and his five supporters on the council have asked voters to repeal a constitutional provision that makes tribal membership available to anyone who has at least one-fourth Indian blood, plus Nooksack ancestry “to any degree.”

That election is scheduled to conclude June 21.

Galanda’s lawsuit argues that repeal of that provision of the tribal constitution would make it more difficult for his clients and other challenged Nooksacks to re-enroll in the tribe if the current effort to strip them of membership succeeds.

That, the suit contends, denies the affected Nooksacks the right to equal protection under law and is therefore a violation of the Indian Civil Rights Act. Galanda wants the judge to order federal officials to halt the constitutional election.

All of the 306 facing loss of membership are descendants of the late Annie George. Tribal officials contend that George did not qualify as Nooksack under tribal law, because her name does not appear on a tribal census of 1942 or on the list of those who got an allotment of tribal lands. Galanda and his clients have submitted other records and letters from anthropologists indicating that Annie George was, in fact, a Nooksack.

The 306 challenged Nooksacks face loss of housing and medical benefits, tribal hunting and fishing rights, tribal jobs and other benefits if they are pushed out of the 2,000-member tribe.