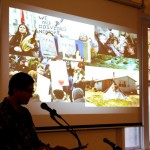 International indigenous rights experts looks at the significance of the Idle No More movement, as indigenous peoples engage with nation-states, the UN, and international institutions specializing in transitional justice. (ICTJ)

NEW YORK, February 28, 2013 —  Leading indigenous rights activists and transitional justice experts from around the world are gathering at Columbia University, in New York, this week to discuss how best to use truth commissions, courtrooms, and other forums to strengthen indigenous peoples’ rights to truth and justice. The discussion is hosted by the Indigenous Peoples’ Rights Program at Columbia University, the U.N. Office of the High Commissioner for Human Rights, and the International Center for Transitional Justice.

The goal of the three-day gathering is to collect and share the experiences of indigenous peoples in designing, using, and advocating for truth and justice processes in countries as far apart as Australia, Canada, Colombia, Guatemala, Greenland, Malaysia, New Zealand, Russia, and the United States.

These calls for justice coincide with growing movements by indigenous rights groups, like Idle No More in Canada and the United States, which are drawing global attention.

Against this backdrop of both abuse and silence, some first nations and governments are charting new ground on ways to uncover the truth about the past, redress abuses suffered by indigenous peoples, and begin to heal as part of official truth-seeking policies.

In North America, two recently established institutions stand out: the Truth and Reconciliation Commission of Canada (TRC), and the Maine Wabanaki-state Truth and Reconciliation Commission. Both institutions examine violations committed by the state against indigenous peoples, and both were established by indigenous peoples themselves in coordination with government. This is an entirely new phenomenon.

Chief Wilton Littlechild, who helped open the expert seminar on Wednesday morning, is one of three commissioners of the Canada TRC and chair of the UN’s Expert Mechanism on the Rights of Indigenous Peoples.

He is also a survivor of Canada’s Indian residential schools, where, for more than 150 years, Aboriginal children were often forbidden to speak their own languages or practice their own faiths, in an attempt to assimilate them into mainstream Canadian society. Many children were separated from their families and communities and sometimes forcibly removed from their homes.

Each country’s unique historical and social circumstances will shape how groups and government can work together to address and redress historic injustices against native populations.

In Guatemala, the Historical Clarification Commission completed its work in 1999, finding that over 200,000 people had been killed in Guatemala’s civil war from 1960 to 1996. Approximately 83% of victims were Mayan.

Through its investigations, the commission laid the groundwork for today’s landmark case against former Guatemalan General Efraín Ríos Montt, who will now stand trial on charges of genocide.

Alvaro Pop, one of the international attendees and a Mayan activist who assisted with preparations of the Guatemalan Peace Accords, knows how hard it can be for indigenous peoples to raise their concerns. Although Mayans represent nearly 50 percent of Guatemalans and are a stronghold of the economy, they still live “like strangers in their own land,” remarked Pop.

As the UN reports, “The free expression of Mayan religion, language and other factors continues to be hampered by a shortage of resources and a lack of political will to enforce laws.”

Looking ahead, fundamental questions will need to be answered, including how truth commissions can address violations against indigenous peoples when they are still ongoing. While the expert seminar ends on March 1, discussions will continue, resulting in an unprecedented report to the UN Human Rights Council exploring these issues.

“Because indigenous peoples have experienced violence in several areas of the world, under conflict, dictatorship, or as a result of structural injustice,” said ICTJ Vice President Paul Seils, “we anticipate that there will be a need to adapt the instruments of transitional justice to these situations.”

The International Center for Transitional Justice works to redress and prevent the most severe violations of human rights by confronting legacies of mass abuse. ICTJ seeks holistic solutions to promote accountability and create just and peaceful societies. For more information, visit www.ictj.org