In the largest settlement with a single American Indian tribe, the Obama administration will pay the Navajo Nation $554 million to settle claims that the U.S. government has mismanaged funds and natural resources on the Navajo reservation for decades.

The settlement, to be signed in Window Rock, Ariz., on Friday, resolves a long-standing dispute between the Navajo Nation and the U.S. government, with some of the claims dating back more than 50 years.

The sprawling Navajo reservation, located in parts of Arizona, Utah and New Mexico, is the largest and most populous Indian reservation, with 14 million acres of trust lands, which are leased for farming, grazing and oil, gas and other mineral extraction. The land is also leased for businesses, rights-of-way, easements and housing.

“This landmark resolution ends protracted and burdensome litigation,” Attorney General Eric H. Holder Jr. said in a statement provided to The Washington Post on Wednesday. “This demonstrates the Justice Department’s firm commitment to strengthening our partnerships with tribal nations.”

Under the agreement, the Navajo Nation will dismiss its current lawsuit and forego further litigation against the U.S. government for its historic management and accounting of Navajo funds and resources held in trust by the government.

“The Navajo Nation has worked tirelessly for many years to bring this issue to a close,” said Ben Shelly, president of the Navajo Nation. “After a long, hard-won process, I am pleased that we have finally come to a resolution on this matter to receive fair and just compensation for the Navajo Nation.” Shelly said the tribe will host town hall meetings across the Navajo Nation to decide on how the funds can be used or invested.

“It is very important for the Navajo people to understand that this agreement only addresses historical trust claims and does not prohibit or hinder our Nation from pursuing claims with respect to future conduct,” said Lorenzo Curley, the chairman of the council, who was involved in the negotiations with the Obama administration.

While the settlement marks the largest ever with one tribe, the Obama administration has made several other multimillion-dollar agreements with tribes since 2009 to settle long-standing grievances by Native Americans.

Along with the Navajo Nation, the administration has negotiated settlements resulting in a total of $2.61 billion paid to 80 tribes since 2010 for tribal trust accounting and trust management claims. The Interior Department manages almost 56 million acres of trust lands for federally recognized tribes and more than 100,000 leases on those lands. The department also manages about 2,500 tribal trust accounts for more than 250 tribes.

In the fall of 2009, attorneys for many of the tribes with litigation pending against the U.S. government wrote to President Obama and asked his administration to expedite settlement discussions. In April 2010, Obama administration officials, including then-Associate Attorney General Tom Perrelli, met with the attorneys and started a settlement process.

“From his first days in office, President Obama has worked to honor the government-to-government relationships between the United States and tribal governments,” said Sam Hirsch, acting assistant attorney general for the Justice Department’s Environment and Natural Resources Division, a key member of the department’s Indian country team. “It reflects my personal commitment to resolving long-standing lawsuits rather than wasting the time and resources of both the United States and Indian tribes in contentious litigation.”

In 2011, the administration agreed to pay $380 million to settle a long-running lawsuit by the Osage Tribe of Oklahoma regarding the government’s accounting and management of the tribe’s trust accounts, trust lands and other natural resources.

The next year, Holder and then-Interior Secretary Ken Salazar announced a $1 billion settlement of lawsuits filed by 41 federally recognized tribes across the country with claims dating back 100 years.

In addition, the Obama administration in 2009 settled the highly contentious Cobell class-action lawsuit regarding the government’s trust management and accounting of over 3,000 individual American Indian trust accounts. The lawsuit, which involved several hundred thousand plaintiffs, was filed by Elouise Cobell in 1996 in the U.S. District Court for the District of Columbia and included hundreds of motions, dozens of rulings and appeals, and several trials over 13 years. 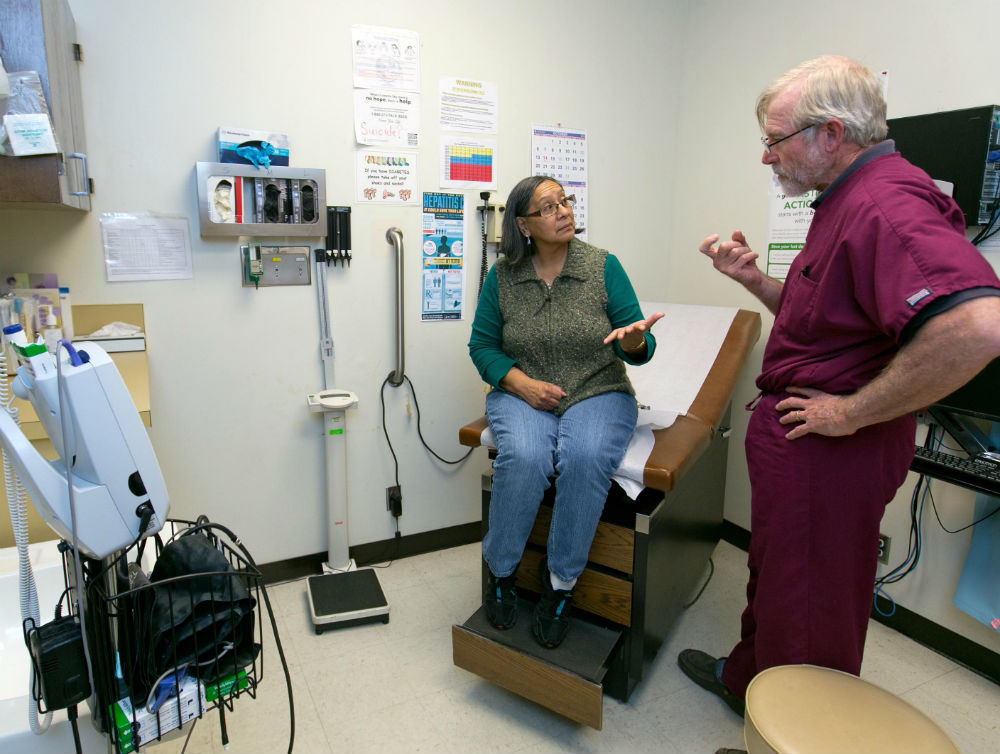 Norma Thomas, a resident of Owyhee on the Duck Valley Indian Reservation, talks with David Simons, a doctor at the Shoshone-Paiute Tribes Owyhee Community Health Facility in Nevada on Nov. 25, 2013. (Darin Oswald for The Washington Post)

After decades of underfunding hundreds of contracts with Native Americans, the federal government over the past several months has reached settlement agreements on 146 claims, totalling $275 million, government records show.

The settlements for health and social service contracts represent about 10 percent of all outstanding tribal claims with the federal Indian Health Service. The unpaid contract expenses were the subject of two U.S. Supreme Court rulings, the latest in June 2012, in which both IHS and the Bureau of Indian Affairs (BIA) were ordered to pay outstanding claims on the self-determination contracts.

The disputed contracts have their origins in the 1975 Indian Self-Determination Act, which gives tribes the option of receiving federal funding to run their own education, public safety and health-care programs. Those services — which were promised in perpetuity in tribal treaties — historically were delivered by the IHS and BIA.

The unpaid claims are for “contract support costs,” which include travel expenses, legal and accounting fees, insurance costs and workers’ compensation fees. Such costs typically account for between 10 to 20 percent of the value of a contract.

“The federal government has a trust responsibility to provide health care for this nation’s First Peoples and it’s about time it steps up to pay legal and contractual obligations to those tribes that choose to take over this responsibility through self-governance contracts and compacts,” Sen. Mark Begich (D-Alaska) said in a prepared statement.

Through letters and public hearings, Begich and several other members of Congress have pressured IHS and BIA to resolve past unpaid claims since the last Supreme Court ruling nearly two years ago.

IHS is working through thousands of disputed claims in more than 200 lawsuits filed by tribes, which are being individually negotiated. BIA is dealing with a single class-action lawsuit, which includes unpaid claims for hundreds of tribes, which has not yet been resolved.

The largest IHS settlement of $96 million went to Southcentral Foundation in Anchorage. The organization operates several health-care facilities, including a portion of the Alaska Native Medical Center, and serves more than 60,000 Alaska Natives and American Indians.

Llloyd Miller, an attorney in the Supreme Court cases, who is also representing 55 tribes in the settlement talks, said progress is being made, but at the current pace it would take IHS another three years to resolve all outstanding claims.

“It’s an enormous breakthrough because, over the past two years, little in the way of settlements have been achieved,” Miller said. “The challenge for the agency is to resolve the remaining 90 percent in a coherent time frame.”

In February, both agencies committed for the first time in decades to fully fund the self-determination contracts in their 2014 revised budgets. The revisions followed a Washington Post article in December that detailed the administration’s plans to impose spending caps on the contracts, despite two U.S. Supreme Court rulings ordering the government to fully compensate the tribes.

Federal contractors have carefully monitored the case because they worried that if federal agencies were able to not pay contract support costs for tribes, it could set a dangerous precedent for non-tribal service contracts with federal agencies.

In a friend-of-the-court brief to the Supreme Court in 2012, the U.S. Chamber of Commerce said: “The government’s position would have the effect of making contracts illusory by giving it a broad right to refuse payment at the stated price for services rendered.”