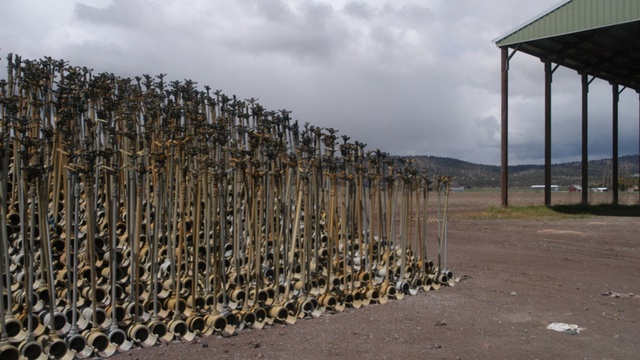 A pile of irrigation pipes in the Klamath. Tribal members in the Klamath Basin recently voted to approve a water sharing agreement with ranchers and other irrigators. | credit: Earthfix | rollover image for more

According to Klamath Tribes Chairman Don Gentry, 564 Tribal members voted in favor, and 419 members voted against the Upper Klamath Basin Comprehensive Agreement (UKBCA), which was released in March. Gentry said he wasn’t surprised by the close vote.

“This is a decision that will affect our people forever,” Gentry said. “We were concerned from the start because of the timeframe; we knew we had limited time to interact with our Tribal members.”

Three Tribal members released a formal statement earlier this week expressing frustration with the amount of time members had to review the 95-page agreement and mail in their ballots.

“The positive vote of our Tribal Members affirming the UKBCA is a monumental step in achieving the long-established goals of our people to restore and protect our Tribal fisheries and other treaty resources,” Gentry said in a statement.

Tribal approval brings stakeholders one step closer to introducing a comprehensive piece of legislation in Congress, ensuring upper Basin water needs are met for generations to come. Upper Basin stakeholders have been working for months as a subcommittee of the Klamath Basin Task Force appointed last July by Sen. Ron Wyden, D-Ore.

The 27-member task force was divided into three subcommittees focused on improving three areas of Klamath water use: developing a water management plan for the upper Klamath Basin, addressing the affordability of agricultural power rates and lowering federal costs for proposed settlements.

“With approval of the agreement, Sen. Wyden will now move forward to introduce a legislative package to enact the UKBCA. The bill will also include legislation of the Klamath Basin Restoration Agreement (KBRA) and the Klamath Hydroelectric Settlement Agreement (KHSA), which our members voted overwhelmingly to support,” Gentry said in a news release.

“I certainly feel positive. I know this is a critical step in the right direction,” Gentry said.