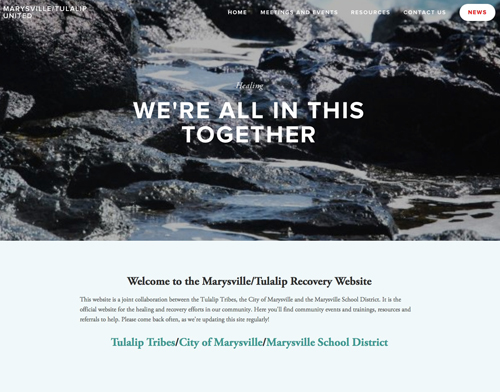 The landing page of the new community recovery team website reads: “We’re All in This Together”. The website is the product of a joint collaboration between the Tulalip Tribes, City of Marysville, and the Marysville School District.

The purpose of the website is to provide stakeholders across the Marysville and Tulalip communities with a common place to find information and resources on healing, hosted events, trainings and details on the larger recovery efforts in the aftermath of the tragic murder/suicide that occurred at the Marysville-Pilchuck High School campus on October 24, 2014.

Since the tragedy, the Tribes, City, School District, and the Marysville and Tulalip leaders, community members, and members in the field of post-trauma events have been meeting regularly to plan and coordinate efforts for the Marysville and Tulalip communities. Through this work, a Community Recovery Team developed and is comprised of members from all three entities including area-wide representation from Victims Support Services, the Ministerial Association, Volunteers of America, American Red Cross, Marysville YMCA, United Way of Snohomish County, and so many more who have come together in support of our youth and communities. The work of the committee has included coordinating trainings, providing resources, holding community meetings, and providing support for the families and victims of the tragedy and others. The website will now consolidate all the information generated by this team into a single website for community members to access.

The website is shared by the Tribes, the City, and the District, and will be updated regularly with new information and events as they are scheduled, resources, and other pertinent information. 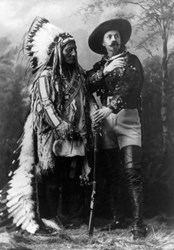 In Native American culture, an elder was considered to be the wisest. Elders were thought to deliver just decisions, and often rose to the rank of chief. Native American chiefs have accomplished many important feats for Native Americans, and have been recorded within American history.

Now, a new website dedicated to legendary Native American chiefs has been launched.

“Many Native American chiefs have been regarded as great warriors, and have spearheaded campaigns to protect their people from danger at overwhelming odds,” said NativeAmericanChiefs.org spokesperson James Heldon. “Chiefs have led entire civilizations, expelled enemy occupants and have led tribes into profitable lands, filled with hunting grounds and fertile soil.”

The Native American leader, Geronimo, was an Apache warrior who fought the United States and Mexico to protect his people’s land. His father-in-law, Chief Cochise, was considered a fearsome warrior, and spent much of his life at war with Mexican forces to protect his tribe’s culture.

The Navajo chief, Manuelito, evaded capture by American forces in the 1800s, and additionally led his people into battle against overwhelming odds against the American Army. He took part in several battles, and participated in the Long Walk, where the United States forced the Navajo tribe to walk—at gunpoint—from their Arizona reservation to eastern New Mexico.

The Sioux chief, Sitting Bull, is arguably the most famous Native American leader. He’s considered a figure of deep conviction, cunning and bravery, and led his people to a decisive victory against opposing forces during the Battle of Little Bighorn. The Sioux, themselves, were fierce combatants, and entered battle with traditional war shirts, decorated with human scalps and ceremonial beads. Camouflage wasn’t used, as war garments were worn to inspire fear within the enemy. A chief normally stuck out, and was decorated with elaborate clothing and jewelry.

“The many stories of Native American chiefs are passed down through history, and tribes keep them alive—even today,” said Heldon. “Their tales of bravery and heroism are inspiring legends, and will likely exist for centuries. Chiefs have historically led their tribes through struggles, famine and war, and continue to lead modern tribes through hardships.”

To learn more information about Indian chiefs, as well as their accomplishments, take a look at NativeAmericanChiefs.org. Visitors will encounter stories of battles, and access biographical information pertaining to Native American leaders.