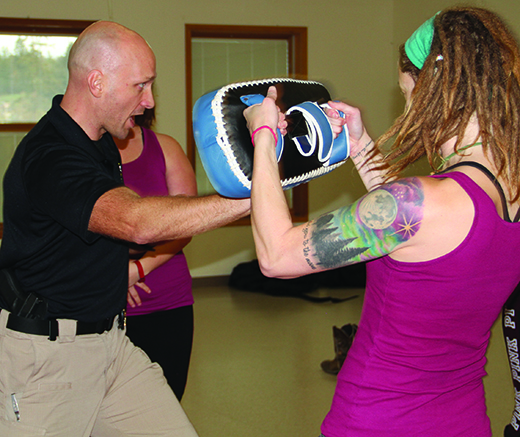 ‘I can’t breathe! I can’t breathe,’ she kept thinking.  It was supposed to have been the perfect day, a trip to the outlet mall with her older sister. She didn’t even know what happened. She was waiting in the parking lot for their mom when a car pulled up, the man inside smiling and chatty. She knew better than to talk to strangers, so she started backing away when someone behind her pushed her forward into the car. Now she was in the trunk of the car, tied into a giant fuzzy blanket. She kept trying to remember what the guy looked like. What did the car look like? How was she going to get out of here? Then she started gulping air again because she couldn’t breathe.

The above scenario is made up, but it’s a scene that Alicia Horne can imagine all too well.

“They’re young ladies and they’re at the age of human trafficking for sure,” she said of her two daughters, ages 10 and 13. Alicia was one of 12 women who attend the first Women’s Self-Defense class taught by Tulalip Tribal Police.

Alicia explained that she originally signed up for the class to support her co-workers at Tribal Court.

“I came to support my staff. Where I work, we are dealing with people who are cussing at us and trying to intimidate us. I came because the environment I work in is a hostile environment. “

She brought her girls hoping to give them tools to be safer as well.

“I want to make sure they’re self-aware and can protect themselves.” 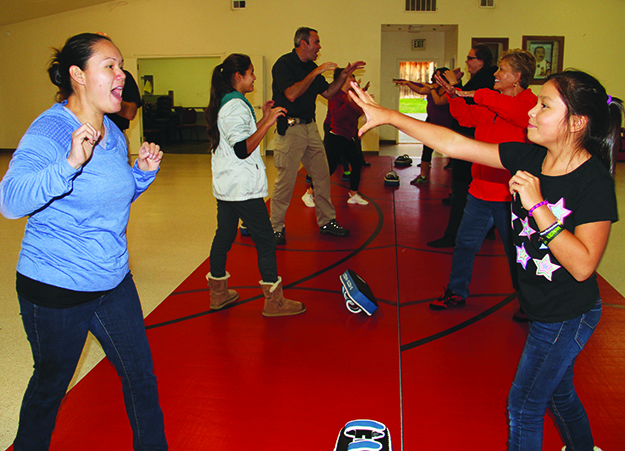 “The typical police response is six to eight minutes away, depending on where you live,” he pointed out. “That can be a long time.”

Particularly, when, according to the Women’s Self-Defense Institute, the average interaction time between a criminal and a victim is 90 seconds.

“Situational awareness and your voice are your most effective tools,” Officer Warren stated. He also explained that being a good witness is a valuable skill that allows police and courts to do their jobs when a crime occurs. Noting the height, weight, skin tone, hair color and clothes that a person is wearing all helps police find and arrest the right person.

“Because if he’s going to do this to you,” said Officer Warren, “He’ll do it to her, and to her,” he pointed to the other women in the room.

Throughout the evening, the ladies learned how to recognize an imminent attack, and use a handful of techniques to defend against strikes, grabs, and chokes, as well as how to protect yourself if you are on the ground and how to use improvised weapons to defend yourself.

“I wanted to be more empowered,” she explained. “I’m older. I want skills to help me be more alert and aware. I think older people in general are a target and vulnerable. Now, I feel like I’m stronger than I thought I was. I consider myself really feminine, but by putting more of my body into action, it gives me more force. 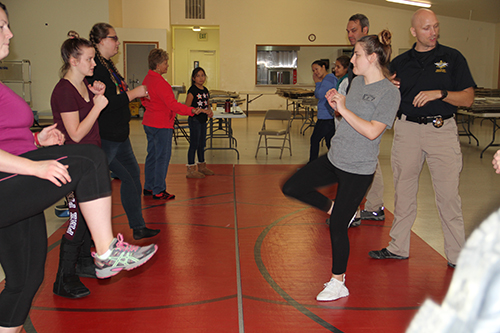 By the end of the evening, many of the attendees were asking for more classes.

“I would recommend it,” Alicia said of the class. “I think it should be for all ages. I see some good techniques that these kids can use whether they’re left home, left in the car or going to the store by themselves. The crime epidemic has no boundaries for any age or house. When someone is in the mindset of getting what they need, things happen and it’s good to prepare yourself.

“What stuck out to me is certain techniques. When they’re on top of you, that seems like a helpless situation and having a move to get them off you, to me, that move was more powerful than you think it would be. The talking part was pretty informational, it’s a lot to absorb and think about,” Alicia explained, recalling the beginning of the class, when Officer Warren referred to Tribal code 305200 and Washington laws RCW9.16.020, both of which outline a citizen’s right to self-defense.

“I think there should be more classes,” continued Alicia. “When you take your first class, you’re stepping outside of your comfort zone. Then, by the second or third class you have it cemented in your mind what you’re going to do. After your two or three classes, then you should take a refresher maybe once a year. Kind of like CPR classes.”

As the class came to an end, Officer Warren warned that everything he taught was useless, unless the women continued to practice the techniques and strategies that they learned.

For more information or to show interest in additional classes, contact Office Mike Johnsen at the Tulalip Police Department Mjohnsen@tulaliptribalpolice.org.

SNOHOMISH COUNTY, Wash. – Pregnant women, moms, and their families are invited to the Snohomish Health District clinic in Lynnwood on Aug. 15 to celebrate National Breastfeeding Month.
The event runs from 10 a.m. to 2 p.m. at the Women, Infants & Children (WIC) / First Steps Clinic at 6101 200th St. SW, Lynnwood. Refreshments, medical and dental resources, family services, and information about WIC services and breastfeeding support will be on hand.
Breast milk is the preferred source of nutrition for infants and is recommended for the first year of life. Breastfeeding can protect both babies and mothers from many chronic health conditions and builds a foundation for life-long wellness.
One way WIC supports clients who are working moms is by providing breast pumps to loan, as well as offering classes and peer advice for breastfeeding women. Most parents who receive WIC services have jobs, but are low income and benefit from monthly food checks worth $50-$100.
The WIC nutrition program serves almost half of all children born in Washington state, and about 7,000 moms and children under age 5 are Snohomish Health District WIC clients. To learn if you are eligible for WIC or for other family services, contact the Family Health Hotline at 1.800.322.2588.
Also on Aug. 15, Premera Blue Cross will be honored with a Healthy Communities Award from Snohomish Health District. The award is presented to honor organizations that have adopted promotion programs or policies that support healthy choices for the people they serve or employ.
Premera is being recognized for providing exemplary pumping rooms for their employees who are breastfeeding. Each of the five buildings on Premera’s Mountlake Terrace Campus has at least one clean and private room for breastfeeding employees, along with an easy scheduling system and separate refrigeration dedicated for breast milk storage. Their facilities demonstrate Premera’s commitment to family-friendly employment and best practices for infant nutrition.
Premera employs approximately 2,300 people at their Snohomish County Mountlake Terrace campus and provides medical coverage for over 1.7 million people in Washington and Alaska.
A current Premera employee states, “I had nothing but a pleasant experience with my employer, Premera Blue Cross. It is easy to schedule a time to be able to go and pump so that I could continue breastfeeding after returning to work”.
Incorporated in 1959, the Snohomish Health District works for a safer and healthier community through disease prevention, health promotion, and protection from environmental threats.

By Kathleen Sebelius, Secretary of Health and Human Services

Today, we join our White House colleagues in celebrating National Breast Cancer Awareness month; and almost four weeks into the launch of the Health Insurance Marketplace, I’m reminded of the tremendous impact the Affordable Care Act has on the lives of American women.

As the President said, the law is much more than just a website – it’s affordable, quality health insurance made available to everyone.  Through the Marketplace, 18.6 million uninsured women have new opportunities for affordable, accessible coverage.  And if you’re one of the 85 percent of Americans who already have insurance, today you have stronger coverage and more choices than ever before.

Important preventive services are now available to women at no additional cost.  These include an annual well woman visit, screening for breast, cervical, and colorectal cancer; certain contraceptive methods; smoking-cessation treatment and services; breastfeeding support and equipment; screening and counseling for interpersonal and domestic violence; immunizations; and many more.  Thanks to the health care law, more than 47 million women have guaranteed access to preventive services without cost-sharing.

These preventive services are critical to keeping women healthy.  For example, breast cancer is the most common cancer affecting women and the second leading cause of cancer death for women in the US, after lung cancer. But when breast cancer is caught early and treated, survival rates can be near 100 percent.

The Affordable Care Act also protects women’s access to quality health care. No one can be denied health insurance coverage because of a preexisting health condition, such as breast cancer, pregnancy, depression or being a victim of domestic violence.  And there are no more annual and lifetime dollar limits on coverage.

Today, health plans in the Marketplace offer a comprehensive package of ten essential health benefits, including maternity care.  An estimated 8.7 million American women currently purchasing individual insurance will gain coverage for maternity services, and most women will no longer need a referral from a primary care provider to obtain obstetrical or gynecological services.

Cost has also been a significant barrier to care for many women.  According to one study, in 2010, one third of women spent 10 percent or more of their income on premiums and out of pocket costs.  For low income women, that situation is much worse – over half of women who make $11,490 per year or less spend at least $1,149 a year on care.  But through the Marketplace 6 out of 10 uninsured individuals can get coverage for $100 or less.

This year, as in every year, women will make important decisions for themselves and their families about health care.  They can apply for coverage through the Marketplace:  Online at Health care.gov; Over the phone by calling the 24/7 customer service center (1-800-318-2596, TTY 1-855-889-4325); Working with a trained person in their local community (Find Local Help); or by submitting a paper application my mail.

The six-month enrollment period has just begun.  And unlike a sale on Black Friday, coverage will not run out; it will not get more expensive.  Sign up by December 15, 2013 for coverage starting as early as January 1, 2014. Open enrollment continues until March 31, 2014.

To read more about the how the Affordable Care Act addresses the unique needs of women, visit: http://www.hhs.gov/healthcare/facts/blog/2013/08/womens-health-needs.html