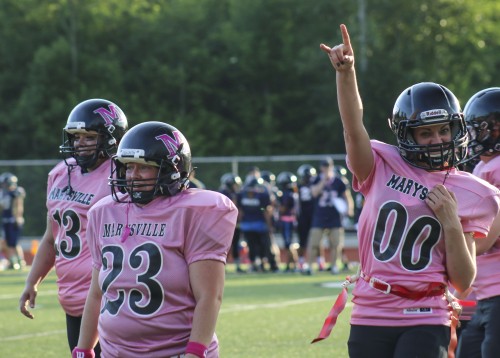 MARYSVILLE – They are a team of 31. They are tough. They are proud and they play with heart. They are moms who play football to support their kids. Through a combination of tackle and flag football, called “flackle,’ the Marysville Powderpuff team raises funds for youth in the Marysville Youth Football League through ticket sales. While the goal is to raise money for the kids, these moms say they also play for themselves.

Marysville Powderpuff is comprised of mothers with youth playing football and cheerleading through the MYFL. Ticket sales from each game go to support MYFL through uniforms, protective gear, and travel costs.  This year the team boasts three Tulalip tribal members.

Mytyl Hernandez is in her second season. She joined to help support her daughter who cheers through MFYL. But that isn’t her only reason.  “I love the competitive aspect of it and being with this amazing group of women a few days a week. I don’t love the bruises, most of the other girls love their bruises but that isn’t my favorite part.” 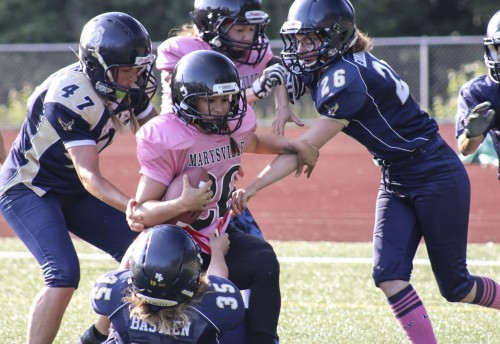 Team organizer Kym Gallo has been playing since the start and is now in her sixth season. She knows it might be strange to see moms suiting up for practice right along with their kids who are running drills on the opposite side of the field, but says the kids think it’s awesome. And the large ticket sales on game day show people are intrigued to see these moms showcase their skills in one of the fastest growing sport across the nation.

“In the first year we struggled just to get 17 women playing. Now we have 31 on our roster.” Gallo credits this appeal to play football to those early women who were brave enough to break the stereotype of football as a male only sport.

Gallo explains other moms in MYFL and women attending game day who caught the flackle bug quickly signed up to join Powderpuff.

“They see us on game day and they want to try it. Our kids are so proud of us; that just helps boost us up. Each one of these women make you want to come back and be around them, not only are we learning football, we are picking each other up. We are a sisterhood,” said Gallo. 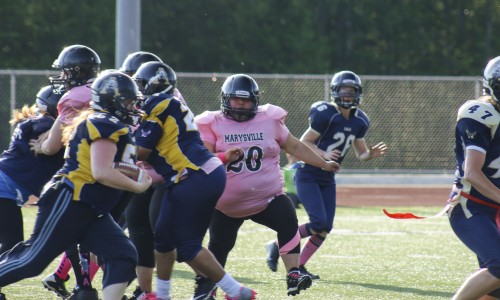 This sisterhood is what drew Tulalip tribal member Veronica Iukes, known as “Wreckingball” on the field, who is playing her first season as a Powderpuff.

“I lost my sister almost two years ago and have had a hard time adapting. I feel like I gained 20 more sisters being on this team. We have created a bond. When one of us is having an off day, everyone is there to pick one another up. They are the strongest mammas I know who will go above and beyond for their kids,” said Iukes, who has two daughters who cheer for MYFL and a son who plays football and encouraged her to start playing this year.

Also a newcomer to this year’s season is Tulalip tribal member Yvonne Williams whose son has played with MYFL for the past six years.  Although interested in joining she was unable to find the time until now.

“When suiting up with full gear it’s game time, whether we are in a game or getting in a good practice. We get a glimpse of what our kids do on the field. The real MVPs are these amazing kids,” said Williams.

“These women are doing what mom’s do best, working hard for their kids. I know some younger girls that can’t wait to play for our team,” continued Williams, who hopes her daughter will join her on the field some day. 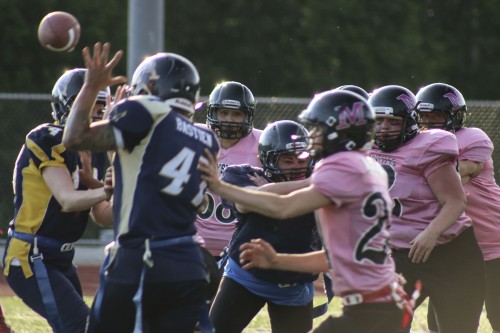 While the idea of women playing football is still a new concept it has gained popularity as women athletes challenge stereotypes.

“We break the stereotype just by looking at us,” said Hernandez. “We are all different ages and sizes in full gear. We are more than just a bunch of moms. This is a sisterhood. We all want to see each other do our best so it’s a constant stream of encouragement, positivity and helping each other get stronger and better. It’s really quite amazing.”

“I would strongly recommend and encourage all mother, aunts, sisters and guardians of children who participate in MYFL or Marysville Junior Cheer Association to play,” said Clarissa Young-Weiser who played with the team last year. “You have a better understanding of the sport and what your child has to go through when playing. There is no other intensity like football.” An injury this season is preventing Young-Weiser from playing this year. She hopes to return the following season. 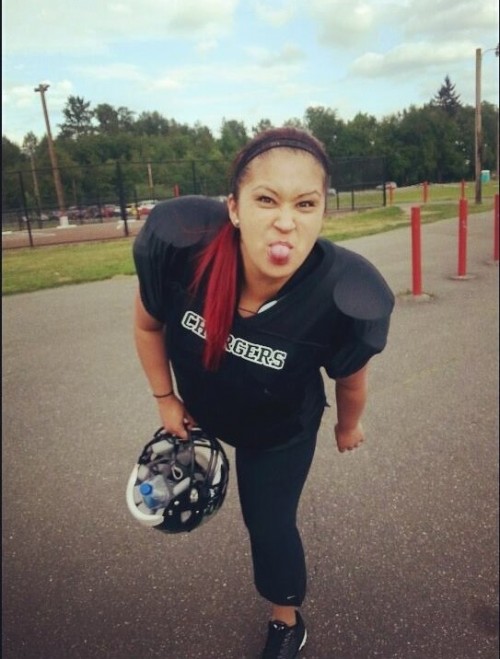 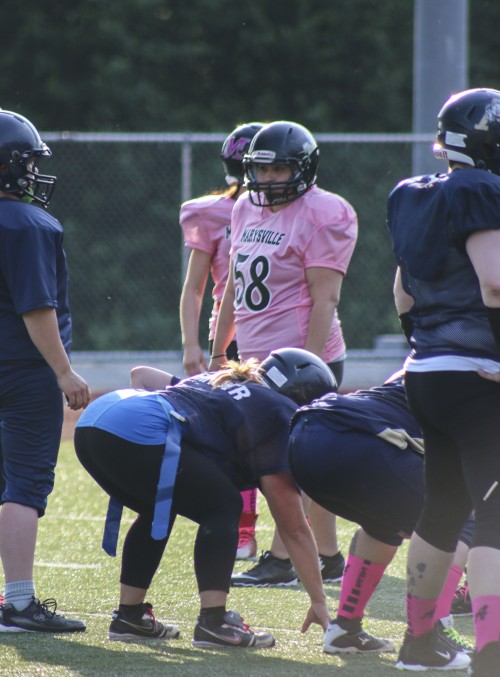 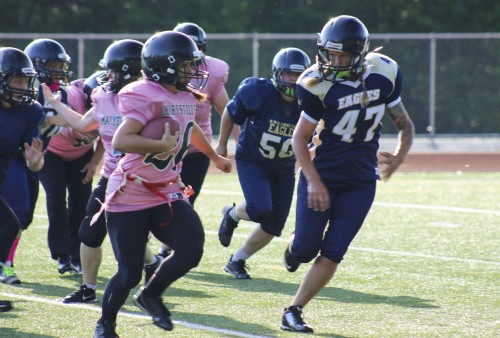 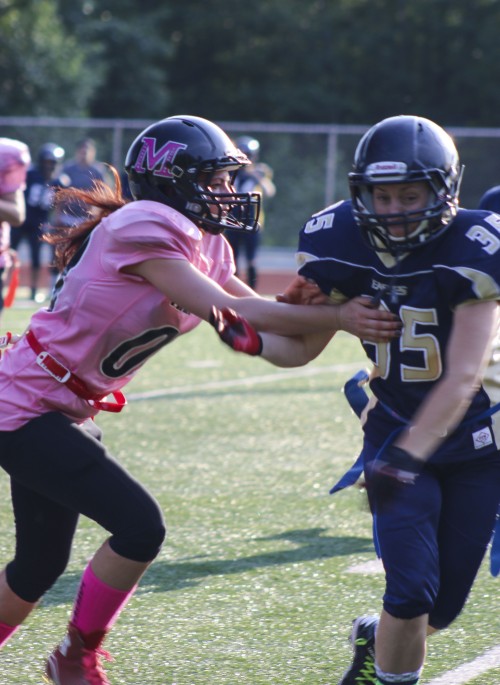 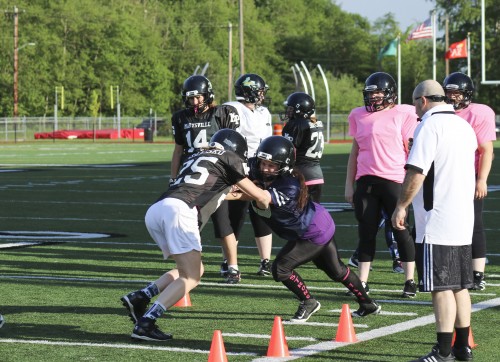 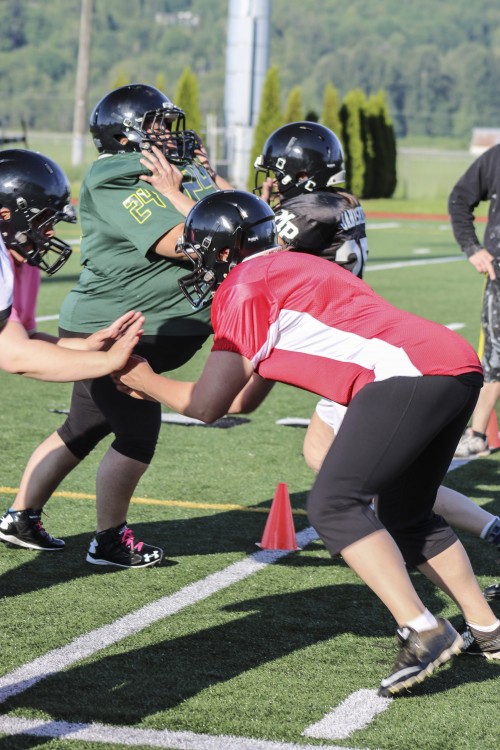 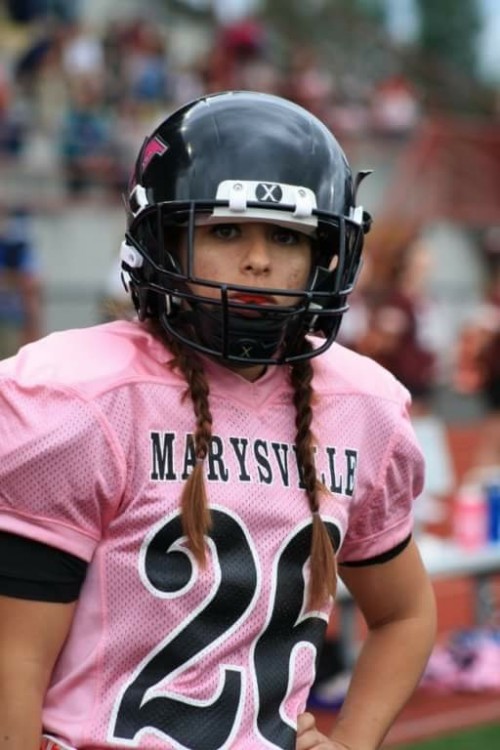