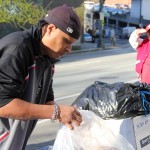 Chief Seattle Club volunteer Robert Brown helps to haul in the donation of clothing and blankets from Tulalip.

SEATTLE, Wash. – The Chief Seattle Club has been serving urban American Indians and Alaska Natives for the past four decades. It’s a safe place where homeless and low income Native Americans can receive help; enjoy a hot meal, and access social services.

“In addition to providing meals we also have nurses that come here every day from the Seattle Indian Health Board for healthcare. Downstairs there’s the laundry, people can wash their own clothes, take a showers, and get hygiene items. We also have a clothing bank. We provide financial assistance for those that are trying to get into housing or trying to prevent from being evicted from their current housing. We also offer bus passes, and ID cards,” said Jenine Grey, Chief Seattle Club Executive Director.

The Chief Seattle Club thrives on donations to provide care and essential needs for Native Americans. Sizable donations from outside communities, such as the Tulalip Tribes, help to keep the Club running successfully.  Every month, Donald “Penoke” Hatch, Tulalip Tribes Board of Director, delivers a truck load of donations that are given by the Tulalip community, consisting of new and used clothing, sleeping bags, blankets, and other essential items.

“I bring 12 to 15 truck loads a year. I want to help my people. There are a lot of different areas within the tribe that are donating things,” said Don. 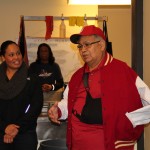 Tulalip Tribal member Donald “Penoke” Hatch on his monthly visit to the Club.

Among the many benefits offered at the Club, Native Americans can join in on the Sunday service, held every Sunday at 9:30 a.m. with Father Pat Twohy.