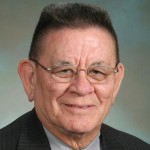 John McCoy, a citizen of the Tulalip Tribes in Tulalip, Washington, was elected November 6 to a sixth term in the Washington state House of Representatives. A Democrat, he represents the 38th District, which includes the Tulalip Tribes reservation, 40 miles north of Seattle.

He’s an important voice and a builder of bridges of understanding about the state’s First Peoples. The hallmark of his fifth term was a bill that establishes a procedure for states to cede jurisdiction over criminal and civil matters on tribal lands to federal and tribal governments. This year, he’s chairman of the Community Development, Housing and Tribal Affairs Committee; vice chairman of the Environment Committee; and member of the Education Committee.

He also is chairman of the executive committee of the National Caucus of Native American State Legislators; there are 79 Native legislators in 18 states. He is the former general manager of the Tulalip Tribes’ Quil Ceda Village.

McCoy, who along with Jeff Morris [D-Anacortes] are the only two self-identified American Indians in the state legislature, recently talked to Indian Country Today Media Network about his expectations for 2013.

Sales tax revenues are up, but overall revenues are nowhere near where we need them to be. Where’s the money going to come from to fully fund education and meet the state’s other needs without implementing a state income tax?

Everything is on the table. We’re discussing, right now, what can we accomplish as a legislative body and what items are we going to need to take to the voters of Washington. You know, the voters, they’ve sent a mixed message. They keep voting for the supermajority vote of two-thirds [of the Legislature] to pass any tax issue, but they turn around and tell them that they want all these services. Well, those services have to be paid for. So their message is we want all these services, but we don’t want to have to pay for it. There needs to be some reality set in with the voters, that if they want all these things they’ve got to pay for it because we can’t print money.

Will the Legislature be proposing some funding measures?

More than likely, I don’t know. Because of the makeup of the Senate now, we’re going to have to step back and review what we’ve been working on for the last year to figure out what we can and can’t do.

There are some brilliant young leaders in Indian country in Washington state. How do we get more Native people to run for state office and the Legislature?

I struggle with that almost every day. We need more bright young leaders. Because of the lack of resources, they in essence have had to stay home and take care of the community at home. But now that a majority of the tribes have resources, that they’re taking care of their own, now they need to understand that if they’re to be more successful, they’re going to have to start working with surrounding communities to accomplish things that they need to. In essence, we can’t live in a vacuum anymore, the vacuum of the reservation. You have to expand because you might say you’re outgrowing the reservation. If you’re going to outgrow it, then you have to work with surrounding communities. Standing around and thumping your chest over sovereignty – no, it’s the art of negotiation now: What is it that we can do to co-exist that is a win-win situation for everybody in the community. Tulalip’s done a pretty good job of that, but like everything else, it needs constant nurturing.

It seems too that if there were more Native people in the Legislature and mainstream politics, it probably would do a lot to improve the understanding of the culture and people as well. Wouldn’t it help build relationships?

Yes, I strongly believe that.

Was there anything that came out of the last session that gives you hope for the future, either in bipartisanship or the Legislature’s ability to work things out?

As horrible as last session was, I was able to get the retrocession process revamped. The previous process, which I used to take Tulalip through in ’96, that process was cumbersome. It was difficult to get through … I streamlined it. The first session of the biennium, there were all kinds of crazy things happening to that bill. I talked to the speaker, the majority leader, the governor. … The governor appointed a task force, which I chaired, and I convinced the Legislature to apply for and get that process qualified as a [Continuing Legal Education course], and they did.

We went through the education process, of what retrocession really is. We only needed three sessions [and] when we reintroduced the legislation, it sailed right on through. Again, it was about education, getting everyone to understand what retrocession really is – It’s Indians having jurisdiction over Indians within the boundaries of the reservation. Don’t read anything into it, that’s all it means.

What legislation of import do you see coming up in the next session?

I’m introducing a heavy lift bill to allow tribes to compact for their own tribal schools in the state. A heavy lift bill is a bill that is going to generate a lot of controversy. Once again, I have a lot of education to do.

How did that issue evolve?

A few tribes came to me and said they wanted it. They actually got excited about the charter school initiative, because they wanted their own schools. Well, the charter school process is cumbersome for tribes, not that it couldn’t work, it was just going to be cumbersome, and I had this bill in the works before the language for the initiative was done. The reason for the bill is that some tribes were successful in negotiating with their local school districts to create their own school which is actually in current law. The problem is, unilateral action can be taken and a couple tribes had their school districts tear up the memorandums unilaterally, so it undid everything that they had been working so hard on. So they wanted certainty. So, in working with the tribes and a couple of national organizations, we think we have a bill the tribes and the state can agree to. Another bill I’m working on which almost got passed in last session – it got caught up in the budget morass – is having the state recognize the fourth Friday of the month of November as Native American Day.