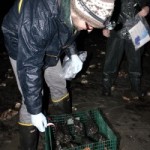 Treaty tribes in Northwest Washington are working with the Washington Department of Fish and Wildlife to use caged mussels to analyze toxic chemicals in Puget Sound.

The National Mussel Watch Program, run by the National Oceanic and Atmospheric Administration (NOAA), has been monitoring toxic contaminants in lakes and coastal waters since 1986.

The Washington Department of Fish and Wildlife recently began a pilot project in conjunction with NOAA to assess the feasibility of using caged mussels for contaminant monitoring. In previous years, Mussel Watch harvested from resident populations, but putting mussels in cages gives researchers more control over the sampling area.

Mussels are filter feeders that retain any chemicals in the water for two to four months. After they are retrieved, the caged mussels will be analyzed for 150 toxic chemicals commonly found in Puget Sound, including polycyclic aromatic hydrocarbons, polychlorinated biphenyls (PCBs), pesticides, benzenes and trace metals. The program also has added pharmaceutical and hormone detection to the list of toxins analyzed. 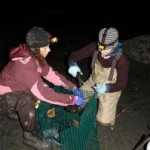 The Stillaguamish Tribe has partnered on this effort since 2006. For this season, the tribe adopted two sites in Port Susan Bay.

“I think it is essential to monitor the presence and trends of toxins in Port Susan Bay, given the impacts of contaminants on salmon recovery and overall wildlife health,” said Stillaguamish biologist Jennifer Sevigny. “There are also important links between toxin loads and tribal shellfish harvest.”

The Port Gamble S’Klallam Tribe joined the program in 2012. Staff members and citizen volunteers placed three cages in Port Gamble Bay and at Point No Point in November. Both tribes retrieved their cages in January.

“The tribe is conducting its own human health risk assessment and we want to see how the contaminant levels in Port Gamble Bay compare to Puget Sound and the rest of the nation,” said Rory O’Rourke, the tribe’s environmental scientist. “The results also will allow us to find existing pollutants we’re not aware of and need attention.”

Mussel Watch provides state-to-state comparisons and baseline data ahead of oil spills and large storms. In the long-term, the research will establish trends of toxic chemicals in the Puget Sound nearshore.