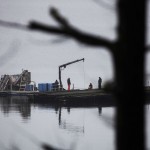 EVERETT — Between 2005 and 2009, billions of oyster larvae began dying at hatcheries around the state before anyone knew what was going on or could do anything about it.The state’s $270 million shellfish industry, which employs about 3,200 people, is in danger.

One oyster farm, Goose Point Oysters in Willapa Bay, has begun raising oyster larvae in Hawaii because it can no longer grow them here.

“The problem’s not going away,” said Ian Jefferds, general manager and co-owner of Penn Cove Shellfish in Coupeville.

On top of pollution and loss of habitat, rising acidity in Washington waters is the latest hazard faced by marine life, including the lucrative shellfish and fishing industries.

Acidification of marine waters is caused primarily by the ocean’s absorption of carbon emissions, scientists say. Other human activities, such as agricultural runoff, contribute. The oceans are rapidly becoming more acidic after thousands of years of stability, scientists say.

The Northwest is particularly vulnerable to the problem because it receives naturally upwelling carbon-laden water from deep in the Pacific Ocean.

Terry Williams, commissioner of fisheries and natural resources for the Tulalip Tribes, was concerned enough about the phenomenon to be one of several people to approach former Gov. Chris Gregoire in 2011 to form a panel to study the problem.

Reducing the effect of human activities is one place to start, the panel concluded. Carbon emissions represent a much broader and tougher challenge. 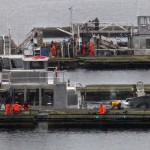 The problem of ocean acidification “is not going away,” said Ian Jeffereds, general manager and co-owner of Penn Cove Shellfish.

“Godzilla is still small. Let’s not wait until he’s big,” said Brad Warren, director of the Global Ocean Health Program, a Seattle-based group formed to address ocean acidification and its effect on fisheries.

Warren, a member of the state panel, spoke at an informational meeting on the topic in Everett last Thursday.

About 120 people attended. Panel members have been conducting the meetings around the state by request of local officials.

Still, she would have liked more effort to involve the agricultural community before recommending that farm waste be reduced.

“You have to look at this holistically,” Smith said. “We need to recognize that we need both; we need aquaculture and we need agriculture.”

Smith said the panel’s call for stricter regulations on pollutants, while not yet specific, are getting ahead of the game.

“That’s backwards,” she said. “You build solid models, you create a solid scientific foundation, then you move forward with the regulatory practices that are warranted.”

Some people still look at ocean acidification with the same skeptical eye as they do at climate change, Warren said. While both conditions are caused by carbon emissions, they’re not the same thing, said Terrie Klinger, an associate professor in the school of marine and environmental affairs at the University of Washington, a member of the study panel who spoke at the Everett meeting.

Scientists are just scratching the surface about ocean acidification, but a few facts have been established, according to scientists on the panel.

About 30 percent of carbon emitted into the atmosphere from human activity is absorbed by the oceans, Klinger said.

Acidification is known to affect pteropods — tiny, plankton-size snails — along with krill and some types of prawns that are staple foods for fish, whales and other sea life.

“These species are known to be sensitive to acidity and they’re a large part of local food webs,” said Shallin Busch, a research ecologist for the National Oceanic and Atmospheric Administration in Seattle. She’s also a member of the study panel.

The ocean’s surface pH level — which measures the acidity or alkalinity of an environment — was about 8.1 for millennia, as far back as carbon dating tells us, Klinger said. The lower the number, the greater the acidity.

When it comes to acidity in the water, one-tenth of a point is a big difference, Klinger said.

In measurements taken at Tatoosh Island on the Washington coast in 2000, the level was 7.5, Klinger said.

There are some unknowns as well. Some species, such as the Suminoe oyster native to Asia, are comparatively immune to the effects of acidification, Busch said.

In inland marine waters such as those in Western Washington, it’s difficult to measure acidity with consistent accuracy because of the influx of river water and substances in runoff, experts say.

Penn Cove Shellfish grows mussels near Coupeville and at another site on the Hood Canal.

“We’ve seen some incidents in our Quilcene Bay site and at Penn Cove that we don’t have an explanation for,” Jefferds said.

Specifically, some of the mussels have been having trouble clinging to the mesh socks on which they’re grown. The company has enlisted NOAA to study the problem.

Tulalip tribal fishermen have been noticing a decline in fish and shellfish populations for more than a decade, Williams said.

It’s hard to tell, though, how much of the decline is caused by pollution and loss of habitat and how much it might be because of ocean acidification.

That’s why the tribes plan to hire scientists to do detailed studies of local waterways to try to learn more, Williams said.

One thing everyone seems to agree on is that getting started working on solutions is important.

“This is the first state in the country to launch a comprehensive attack on this problem,” Warren said.