WEDNESDAY, FEB. 20, 2013 – The poverty rate for American Indians and Alaska Natives in Rapid City, S.D. (50.9 percent) was around three times the rate in Anchorage, Alaska (16.6 percent) and about 30 percent or greater in five other cities most populated by this group (Gallup, N.M.; Minneapolis; Rapid City, S.D.; Shiprock, N.M.; Tucson, Ariz.; and Zuni Pueblo, N.M.), according to American Community Survey data collected from 2007 to 2011 by the U.S. Census Bureau. See figure. 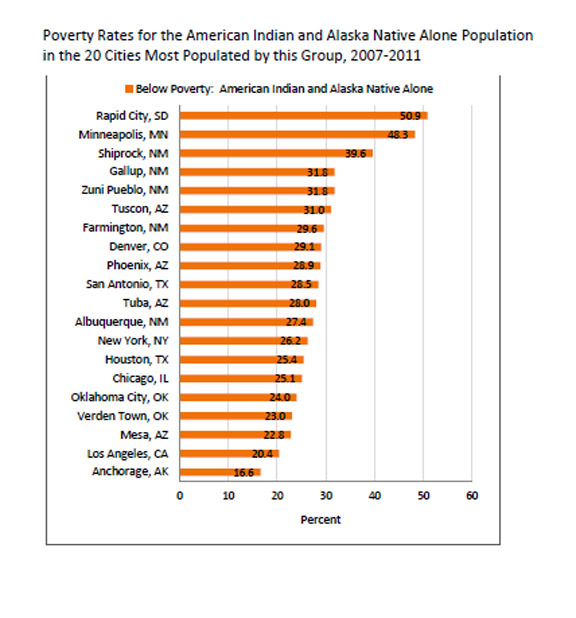 “With the American Community Survey, we can look at the poverty rates for even the smallest race and Hispanic-origin groups,” said Suzanne Macartney, an analyst in the Census Bureau’s Poverty Statistics Branch.

The American Community Survey provides a wide range of important statistics about people and housing for every community across the nation. The results are used by everyone from town and city planners to retailers and homebuilders. The survey is the only source of local estimates for most of the 40 topics it covers, such as education, occupation, language, ancestry and housing costs for even the smallest communities. Ever since Thomas Jefferson directed the first census in 1790, the census has collected detailed characteristics about our nation’s people. Questions about jobs and the economy were added 20 years later under James Madison, who said such information would allow Congress to “adapt the public measures to the particular circumstances of the community,” and over the decades allow America “an opportunity of marking the progress of the society.”