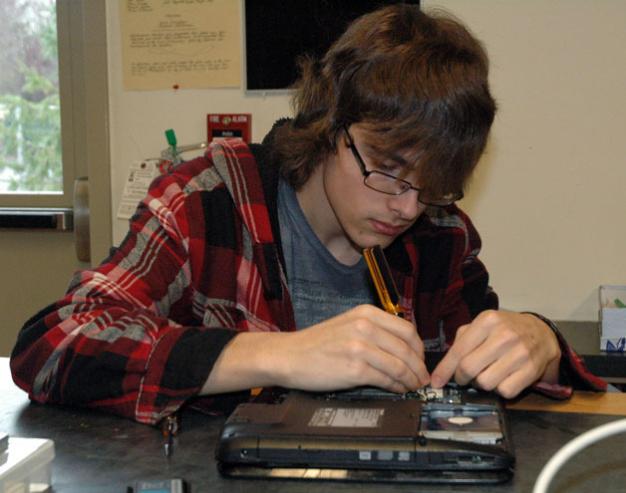 MARYSVILLE — A project that began with six students two years ago now sprawls into three separate class periods of budding techies looking to test their skills while helping out others.

The computer repair lab at the Marysville Arts & Technology High School started up so near the end of the 2010-11 school year that it became a summer project, as students volunteered to fix up malfunctioning but ultimately serviceable machines for the One Laptop Per Child nonprofit charitable campaign, which provides affordable educational devices to the developing world.

Paul LaGrange, the computer applications teacher for the Marysville Arts & Technology High School, explained that his students’ work on behalf of OLPC soon expanded to providing low- and no-cost repair services to members of the local community, not only to give the students in-class opportunities for hands-on applications of what they’re learning about computers, but also to benefit their neighbors.

“This is a student leadership class,” LaGrange said. “They run everything. I exist so that they can have a room to work in. They’re learning how to build websites and program and do graphic design.”

John David Pressman, a junior in the class, explains how the repair lab works with an enthusiasm and exhaustive degree of detail that can only be described as relentless. While he appreciates being able to send computers to those in need in Ghana and Guatemala and Liberia through OLPC, he’s noticed one recurring fault in many of the malfunctioning OLPC machines that he’s needed to fix.

“Your computer’s clock runs off a separate power source, like a really big watch battery,” Pressman said. “Those clocks have to be fed that power all the time, or else they’ll reset to Jan. 1, 1970, which is the Linux default. The problem with that is that the computer can’t process any files whose dates are in the past or in the future, so when you turn it on, it says, ‘I’m dying here,’ and just hangs on the boot screen.”

The computers he’s received from the community offer a far broader diversity of challenges, although one memorable PC tower appeared not only to have been corroded, but also assembled in an entirely counterintuitive way.

“It wasn’t the user’s fault,” Pressman said. “The manufacturer had its insides not following any standard. They put the hard drive on top of the battery, which is the hottest part of the machine.”

While Pressman is thinking he’ll probably go into software programming instead after graduation, fellow juniors such as Christian Bakken and Joel Scott are already planning on studying applied electrical engineering and computer science in college.

“I’m always finding out something new here,” Scott said. “It broadens my knowledge base, and it feels good to give back to people.”

While Mason Totten, also a junior, suspects he’ll mainly pursue computer repair as a side-hobby as an adult, he expressed a similarly altruistic sentiment about his work.

“Everyone deserves to be able to access as much information as they can,” Totten said. “Hopefully, this will allow them to explore the Internet.”

At the same time, Scott and Bakken aren’t above relishing those occasions when computer owners donate their malfunctioning machines, rather than asking for them to be repaired and returned, because such computers become the subjects of their own experiments.

“Donated computers are as exciting as Christmas presents,” Bakken said. “We’ve even made a Frankenstein new computer entirely out of spare parts.”

While the students are happy to pitch in for the community, LaGrange pointed out that their work is not inexpensive, and welcomed members of the community to contact him at paul_lagrange@msvl.k12.wa.us about making donations of their own.