“The beginning of sexually transmitted infections laying siege upon Indigenous peoples’ self-determination occurred when Columbus’s syphilis infected crew sexually terrorized Indigenous women over 500 years ago. HIV has become the latest procession of this colonial legacy, linking violence to infection. Today, the responsibility of defending our self-determination against ongoing colonialism is an active right of Native peoples, but one that includes a call for accountability of non-Natives to claim. National Native HIV/AIDS Awareness Day is therefore a time when the gravity of this story and the strength of our efforts toward healing & health is most appropriate when observed by Natives and non-Natives alike.” —INSPIRE HIV Prevention, Initiative of Native Sisters Preventing Infectious Risks through Empowerment 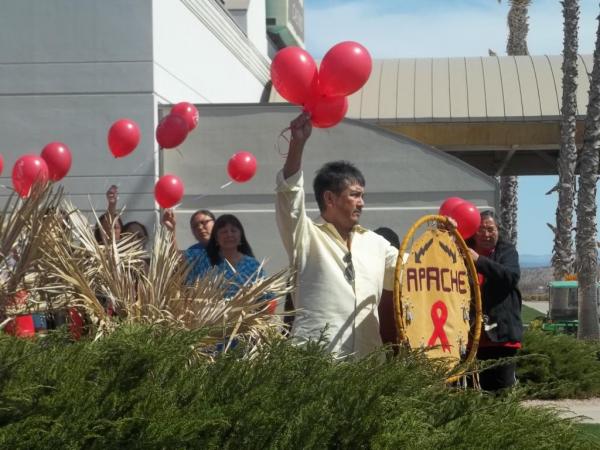 Awareness days exist for many issues these days—for different types of cancers, to bullying, even bird-feeding and fair trade. While awareness and information sharing are important tenants of social change, what do these days really mean on the ground? How do we concretely effect change in one day alone?

This was a recent conversation we had at the Native Youth Sexual Health Network prior to National Native HIV/AIDS Awareness Day on March 20. In any given week our staff and youth leaders are working front-line in Indigenous communities throughout North America and it’s usually a time of the year we get more requests to speak to the realities of HIV and AIDS in our communities.  And again, while this is critical and a great opportunity, we recently reflected on how far-reaching the issues of HIV/AIDS are to not just do prevention messaging but to specifically address historical traumas while not being solely relegated to deficit or disease control models of doing things. A common saying we have at NYSHN is that as Indigenous peoples or youth we aren’t “at risk” all alone, which is how we often have to read about ourselves. Colonization, racism, and not having access to culturally safe care are what actually put our lives at risk.

So what’s the importance of having a conversation like this on an awareness day to effect change? Krysta Williams, our advocacy and outreach coordinator, shared her perspective:

“The day is still important not only because of the issues of stigma and discrimination still faced by people living with HIV but because we are at a point where things will stay the same—annual events that talk about stats—or they will radically shift with the leadership of young Native people who are calling for more than just awareness. Every workshop we do we get more questions, they want to hear what else can be done, more than just knowing the facts but what are our options after diagnosis, how to improve quality of life and generally a big WHY about discrimination and stigma, even in the face of knowing the facts and having access to treatment.

“We are also seeing that it’s us as communities, nations and families that need to take charge—not the law, or mainstream public health or the AIDS industrial complex—but us. We aren’t waiting for a magical solution but actively making the real change of moving towards doing things our way, treating people with respect and love.”

I remember finding out when the first National Native HIV/AIDS Awareness Day happened and how appreciative I felt that there was finally a day where we could actually speak to what is specifically happening in our own Native communities—rather than being pressured to again join the line of “high risk statistic populations”. I spoke to Robert Foley, president and CEO of the National Native American HIV/AIDS Prevention Center, about the significance of the history of when the awareness day started:

“The first National Native HIV/AIDS Awareness Day was held on March 20, 2007, and was a collaborative effort between the National Native American HIV/AIDS Prevention Center, Colorado State University Commitment to Action for 7th-Generation Awareness & Education: HIV/AIDS Prevention Project (CA7AE: HAPP), and the Inter-tribal Council of Arizona with support from the Centers for Disease Control and Prevention (CDC). It takes place on the first day of spring each year as it was believed that this day best exemplifies the ceremonies that occurred on the Spring Equinox for American Indian, Alaska Native, and Native Hawaiian peoples—celebrations of growth, rebirth, healing and rejuvenation. The day was created in order to draw attention to the impact that HIV is having on Native people, and create an opportunity to commit resources and energy to ending this epidemic—both from the community side and the government side.

At the time when National Native HIV/AIDS Awareness Day was created, there were other national awareness days that had been diffused, and they have been shown to be an effective method to highlight the epidemic in certain communities. The National Native American HIV/AIDS Prevention Center, Colorado State University and the Inter-tribal Council of Arizona wanted to ensure that Native communities received the benefit of these efforts and the government contribute resources to make it happen. They created the day, but the real efforts were to lobby the CDC to recognize it, support it and dedicate monies to support the creation and diffusion of Native Awareness Day materials.”

I think it’s this history in lobbying and advocacy it took to create National Native HIV/AIDS Awareness Day in the first place that we can rally around this coming March 20 and build our collective strength from the ground up. More than just another awareness day, it’s a time of the year to make the realities of HIV/AIDS real for everyone, not just because of heightened statistics or risks but because our youth are asking us to remember the possibilities for change this day can have if we do make it real. As Shea Norris, member of the National Native HIV/AIDS Youth Council (NNYC-HIV) told me:

“I think part of the day represents being seen—within our communities, tribes, nations and internationally—as Native peoples. It’s a day to remember community members that have been lost and look forward to educating our peoples. It’s also to open discussions and reduce stigmas, taboos, and stereotypes. What I hope this day brings is awareness for not just anybody but for the youth, to give them as much knowledge as possible so that they can take the next step and educate their peers so that their peers can educate the next generation.”

Jessica Danforth is the founder and executive director of the Native Youth Sexual Health Network.