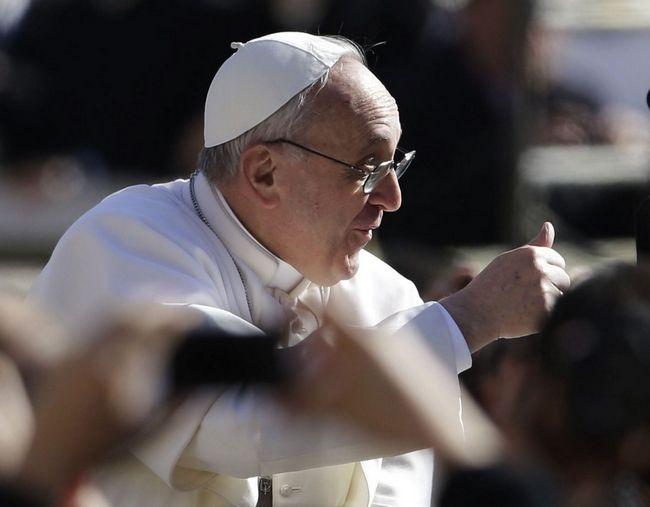 Gregorio Borgia / Associated Press.
Pope Francis gives the thumbs up to the crowd as he arrives in St. Peter’s Square for his inauguration Mass at the Vatican on Tuesday.

VATICAN CITY — Pope Francis laid out the priorities of his pontificate during his installation Mass on Tuesday, urging the princes, presidents, sheiks and thousands of ordinary people attending to protect the environment, the weakest and the poorest and to let tenderness “open up a horizon of hope.”

It was a message Francis has hinted at in his first week as pontiff, when his gestures of simplicity often spoke louder than his words. But on a day when he had the world’s economic, political and religious leadership sitting before him on the steps of St. Peter’s Basilica for the official start of his papacy, Francis made his point clear.

The Argentine native is the first pope from Latin America and the first named for the 13th-century friar St. Francis of Assisi, whose life’s work was to care for nature, the poor and most disadvantaged.

The Vatican said between 150,000-200,000 people attended the Mass, held under bright blue skies after days of chilly rain and featuring flag-waving fans from around the world.

In Buenos Aires, thousands of people packed the central Plaza di Mayo square to watch the ceremony on giant TV screens, erupting in joy when Francis called them from Rome, his words broadcast over loudspeakers.

“I want to ask a favor,” Francis told them. “I want to ask you to walk together, and take care of one another. … And don’t forget that this bishop who is far away loves you very much. Pray for me.”

Back in Rome, Francis was interrupted by applause several times during his homily, including when he urged the faithful not to allow “omens of destruction,” hatred, envy and pride to “defile our lives.”

Francis said the role of the leader of the world’s 1.2 billion Catholics is to open his arms and protect all of humanity, but “especially the poorest, the weakest, the least important, those whom Matthew lists in the final judgment on love: the hungry, the thirsty, the stranger, the naked, the sick and those in prison.”

“Today amid so much darkness we need to see the light of hope and to be men and women who bring hope to others,” he said. “To protect creation, to protect every man and every woman, to look upon them with tenderness and love, is to open up a horizon of hope, it is to let a shaft of light break through the heavy clouds.”

After the celebrations die down, Francis has his work cut out for him as he confronts a church in crisis: Retired Pope Benedict XVI spent eight years trying to reverse the decline of Christianity in Europe, without much success.

While growing in Africa and Asia, the Catholic Church has been stained in Europe, Australia and the Americas by sexual abuse scandals. Closer to home, Francis is facing serious management shortcomings in a Vatican bureaucracy in dire need of reform.

Francis hasn’t offered any hint of how he might tackle those greater problems, focusing instead on crowd-pleasing messages and gestures that signal a total shift in priority and personality from his German theologian predecessor.

On Wednesday, Francis may give a hint about his ecumenical intentions, as he holds an audience with Christian delegations who attended his installation. On Friday, he will put his foreign policy chops on display in an address to the ambassadors accredited to the Holy See.

He then presides over all the rites of Holy Week, capped by Easter Sunday Mass on March 31, when Christians mark the resurrection of Christ, an evocative start to a pontificate.

Francis, 76, thrilled the crowd at the start of the Mass by taking a long round-about through the sun-drenched piazza, shouting “Ciao!” at well-wishers and kissing babies handed up to him.

At one point, as he neared a group of people in wheelchairs, he signaled for the jeep to stop, hopped off, and went to bless a disabled man held up to the barricade by an aide and kiss him on his forehead. It was a gesture from a man whose short papacy so far is becoming defined by such spontaneous forays into the crowd that seem to surprise and concern his security guards.

“I like him because he loves the poor,” said 7-year-old Pietro Loretti, who attended the Mass from Barletta in southern Italy. Another child in the crowd, 9-year-old Benedetta Vergetti from Cervetri near Rome, also skipped school to attend.

The blue and white flags from Argentina fluttered above the crowd, which Italian media initially estimated could reach 1 million. Civil protection crews closed the main streets leading to the square to traffic and set up barricades for nearly a mile (two kilometers) along the route to try to control the masses and allow official delegations through.

At the start of the Mass, Francis received a gold-plated silver fisherman’s ring symbolizing the papacy and a woolen stole symbolizing his role as shepherd of his flock. The ring was something of a hand-me-down, first offered to Pope Paul VI, the pope who presided over the latter half of the Second Vatican Council, the meetings that brought the Church into the modern world.

Francis also received vows of obedience from a half-dozen cardinals — a potent symbol given Benedict XVI is still alive and was reportedly watching the proceedings on TV.

A cardinal intoned the rite of inauguration, saying: “The Good Shepherd charged Peter to feed his lambs and his sheep; today you succeed him as the bishop of this church.”

Some 132 official delegations attended, including more than a half-dozen heads of state from Latin America, a sign of the significance of the election for the region. Francis’s determination that his pontificate would be focused on the poor has resonance in a poverty-stricken region that counts 40 percent of the world’s Catholics.

Francis directed his homily to them, saying: “We must not be afraid of goodness or even tenderness!”

After the Mass, Francis stood in a receiving line for nearly two hours to greet each of the government delegations in St. Peter’s Basilica, chatting warmly and animatedly with each one, kissing the few youngsters who came along with their parents and occasionally blessing a rosary given to him. Unlike his predecessors, he did so in just his white cassock, not the red cape.

Among the religious VIPs attending was the spiritual leader of the world’s Orthodox Christians, Bartholomew I, who became the first patriarch from the Istanbul-based church to attend a papal investiture since the two branches of Christianity split nearly 1,000 years ago. Also attending for the first time was the chief rabbi of Rome. Their presence underscores the broad hopes for ecumenical and interfaith dialogue in this new papacy given Francis’ own work for improved relations.

In a gesture to Christians in the East, the pope prayed with Eastern rite Catholic patriarchs and archbishops before the tomb of St. Peter at the start of the Mass and the Gospel was chanted in Greek rather than the traditional Latin.

But it is Francis’ history of living with the poor and working for them while archbishop of Buenos Aires that seems to have resonated with ordinary Catholics who say they are hopeful that Francis can inspire a new generation of faithful who have fallen away from the church.

“As an Argentine, he was our cardinal. It’s a great joy for us,” said Edoardo Fernandez Mendia, from the Argentine Pampas who was in the crowd. “I would have never imagined that it was going to be him.”

Recalling another great moment in Argentine history, when soccer great Diego Maradona scored an improbable goal in the 1986 World Cup, he said: “And for the second time, the Hand of God came to Argentina.”