“Appropriation of cultural Regalia, such as the war bonnet …causes sacred objects to lose their power when they are represented out of context,” wrote Luger in his artist statement.

When Dyani White Hawk Polk asked a group of artists for work for her exhibition “Make it Pop,” she was looking for contemporary pieces responding to issues of the day.

“We’ve had somber exhibits, politically driven, fine art,” says White Hawk Polk, sitting at her desk in All My Relations Gallery. “I wanted this to feel more playful and cutting edge, something that really speaks to our youth and people interested in pop culture as well as fine art lovers.”

White Hawk Polk got what she was looking for; the colorful show reflects and comments on popular culture in a number of ways. Interestingly, two artists – Frank Buffalo Hyde and Cannupa Hanska Luger – chose to focus on an issue that has many Native Americans upset: the appropriation of Native Regalia by popular culture – in particular, the headdress. 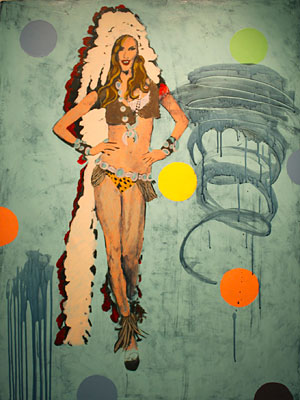 “In-Appropriate 3,” a painting by Frank Buffalo Hyde responding to the use of a Native American headdress and jewelry on a Victoria’s Secret model at a fashion show held on November 7, 2012.

Native Americans belong to many different tribes spread across Native North America. But the headdress, or war bonnet, is a universal symbol of great spiritual importance worn only by highly respected individuals.