Research into the effects of same-sex parenting shows that the sexual orientation of parents is not a major determinant in how well children fare. What matters more, researchers found, is the quality of parenting and the family’s economic well-being. 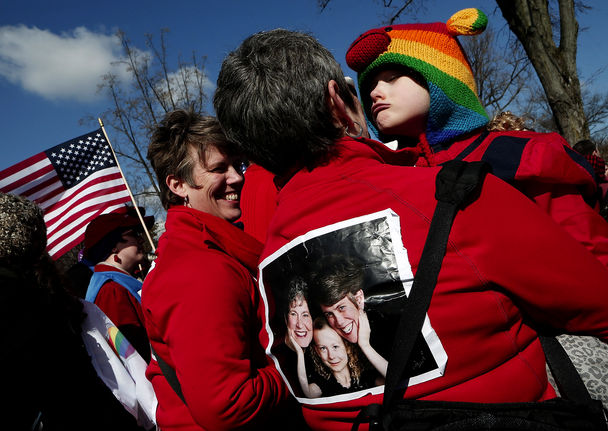 From left, the Rev. Rebecca Voelkel, partner Maggie George and their daughter Shannon Voelkel take part in a demonstration in front of the U.S. Supreme Court on Tuesday as justices heard arguments on the California Proposition 8 appeal. Win McNamee / Getty Images

WASHINGTON — Amid the legal arguments at Tuesday’s Supreme Court hearing on same-sex marriage, there loomed a social-science question: How well do children turn out when they are raised by gay parents?

Justice Anthony Kennedy, who is widely considered the swing vote, called the topic “uncharted waters.” Conservative Justice Samuel Alito Jr. wryly asked, “You want us to step in and render a decision based on an assessment of the effects of this institution which is newer than cellphones or the Internet?”

Indeed, gay marriage is a relatively new phenomenon in the United States. It has only been legal since 2004, when Massachusetts began issuing marriage licenses to same-sex couples. Eight more states and Washington have legalized same-sex nuptials since then, but they have been banned in 35 states.

Researchers have been delving into the effects of same-sex parenting only since the 1980s and 1990s. Most of the studies involve relatively small samples because of the rarity of such families.

Still, there is a growing consensus among experts that the sexual orientation of parents is not a major determinant in how well children fare in school, on cognitive tests and in terms of their emotional development.

What matters more, researchers found, is the quality of parenting and the family’s economic well-being.

“I can tell you we’re never going to get the perfect science, but what you have right now is good-enough science,” said Benjamin Siegel, a professor of pediatrics at Boston University School of Medicine. “The data we have right now are good enough to know what’s good for kids.”

The best study, Siegel said, is the National Longitudinal Lesbian Family Study, which began in 1986 with 154 lesbian mothers who conceived children through artificial insemination. A recent look at 78 offspring found that the children did fine — better, even, than children in a similar study involving more diverse families.

Many opponents of same-sex marriage argue that the academy’s conclusions are premature. They point to some recent studies, including one from Mark Regnerus, a sociology professor from the University of Texas at Austin.

Regnerus, who could not be reached for this article, found that adults who reported being raised by a person who had a homosexual experience were more likely to be on welfare or experience sexual abuse.

Regnerus has been the subject of intense criticism from mainstream researchers and pro-gay marriage activists. But opponents of same-sex marriage say his work should provide a note of caution on an issue that has yet to be studied in adequate depth.

“What the social science makes clear, and it has for several decades, is that children tend to do best when they’re raised by their married biological parents,” said Jennifer Marshall, director of domestic policy studies for the conservative Heritage Institute. “In the case of same-sex households, there is not yet evidence that (children) are going to be the same. There’s every reason to believe that different family structures will have different outcomes.”

Susan Brown, a professor of sociology at Bowling Green State University in Ohio who studies family structures, said it is true that decades of research show that children turn out slightly better when they are raised by their biological parents compared with those reared by single parents or in “step” households.

But children raised in committed same-sex couple-led households do not appear to do statistically worse, she said.