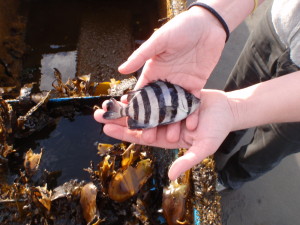 The latest debris from the 2011 Japanese tsunami to come ashore on the state’s southern coast is likely the most surprising so far.

While finding tsunami debris on our beaches isn’t new, what was found inside the stern’s built-in compartment caught the attention of state Fish and Wildlife biologists.

“There was five fish total we found in the boat’s compartment, and this is the first time we’ve seen vertebrates come ashore in tsunami debris,” said Bruce Kauffman, a state Fish and Wildlife biologist in Montesano.

The fish are commonly referred to as a “knifejaw or striped beak fish” that are native to waters off Japan, Korea and China.

“Finding these fish alive was totally unexpected and it is pretty unusual to find live fish,” Kauffman said.

Fisheries biologists say the compartment where the fish were found looked like an aquarium with enough sealife growth that the fish were able to feed off that and survive for so long.

“The fish were found in a compartment in the very back of the boat that appeared to have been enclosed at one point, but didn’t have a lid anymore,” said Leanna Reuss, the tsunami debris coordinator for AmeriCorp in Long Beach.

“It looked like most of the boat was floating underwater, and the fish used it (the compartment) as a shelter to stay alive,” Reuss said. “Otherwise I don’t think they could have survived the long drift across the ocean.”

Reuss says the boat was taken off the beach, and is now in the shop at Cape Disappointment State Park.

Only one of the fish is still alive. That fish is being kept in a holding tank at the Seaside Aquarium in Oregon. Once it’s healthy, the aquarium plans to put it on display.

Other tsunami debris found recently on coastal beaches include a large dock, boats and even a motorcycle.