The Puyallup Tribe of Indians announced Tuesday that it will break ground this summer on a 2,500-stall parking structure near its Portland Avenue casino. When completed, the structure will be followed by construction of a new, full-service gaming facility. 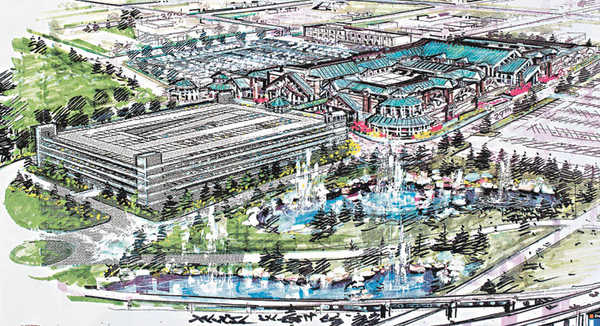 The Queen is about to get more than a facelift.

The Puyallup Tribe of Indians announced Tuesday that it will break ground this summer on a 2,500-stall parking structure near its Portland Avenue casino.

When completed, the structure will be followed by construction of a new, full-service gaming facility.

And nearby, perhaps a station serving Tacoma’s light rail.

“We’ve been leading up to this,” said Emerald Queen Casinos General Manager Frank Wright on Tuesday.

Sewer, water and electrical infrastructure is ready to accommodate the new facility. Soil studies have been completed. The tribe has purchased the necessary land.

The current casino – comprising a Bingo hall built in the 1980s and three large tents – will continue in business until the new casino opens, and will then be disassembled or demolished.

Initial future plans for the space occupied by the present casino call for a mixed-use project that could include office, residential and retail properties.

“We want to establish a permanent facility,” Wright said. “As time has gone by, we’ve had time to see what the market desires. We’ve listened to what people want.”

At the Fife Emerald Queen, which offers play on gaming machines only, customers wanted low ceilings, low lighting and an unhurried atmosphere.

The main casino will contain about the same space as the current facility, but a new showroom will be about 20 percent larger, he said.

Final plans are not complete, but Wright said there will be “four or five restaurants, two fine-dining and one buffet, a noodle bar, a deli, coffee shop and a cigar lounge.”

The full cost for design and construction will be borne by the tribe with funds derived from cash flow, Wright said.

The parking structure should be complete within 18 months of groundbreaking, he said. The entire project may be ready to welcome guests a year or 18 months after that.

Once the current casino is deconstructed, the tribe’s economic development arm, Marine View Ventures, will plan and market the mixed-use project, Wright said.

He said the tribe was making the announcement now “to assist local government in making their development plans.”

One of those plans concerns the extension of light rail from its downtown-only route.

“The tribe has offered to establish a landing for light rail,” said tribal spokesman John Weymer.

One of the proposed routes of Tacoma’s light rail network has tracks extending into East Tacoma, which could include a stop on tribal land at the casino complex.

“We feel it would be an asset to the city,” Weymer said.

The tribe has offered to allow the city free use of its parking structure for commuters or other drivers.

“It’s our way of trying to assist the public,” Wright said. “There are times in the day when we don’t need extensive parking. The tribe is willing to partner with the city and Sound Transit. What’s good for Tacoma is good for us. We have to take care of each other.”

The anticipated increase in traffic would also mean that those people who park might also avail themselves of the services offered at the casino, which would benefit the tribe.

“If light rail doesn’t come, it won’t be the straw that broke the camel’s back,” Wright said. “We feel that we’re just doing the right thing.”

The Tacoma City Council will recommend a final extension route to Sound Transit later this month.

Councilmember Marty Campbell said, “I’m excited to have a $150 million investment in my district. Any time we can have a development that brings new jobs, it helps all of Tacoma. I’m glad to see that the tribe is considering future transit operations in considering their new development.”