$150,000 in funding removed from budget to avoid political fray 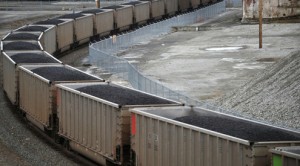 By BRAD SHANNON — THE OLYMPIA

Published: April 12, 2013 on the Bellingham Herald

A House Democratic budget proposal to spend $150,000 to study the larger economic impact of coal-export facilities on Washington state was dying just one day after majority Democrats introduced their proposed $34.5 billion operating budget plan on Wednesday.

Rep. Reuven Carlyle, D-Seattle, had asked to include the money in the budget, saying it “recognizes the need for Washington to thoroughly evaluate the economic impacts of coal exports in our state.” But Thursday evening the money was on its way to being removed at Carlyle’s request.

“We felt it was a gesture to avoid the potential of a political battle that would not be constructive,” he explained in a text as the House Appropriations Committee was starting work on a series of amendments to the budget measure, Senate Bill 5034. Carlyle said it was he who asked to remove the funds.

The proposal had offered Washington a chance to gain additional information on an issue that is intensifying politically, and Carlyle had initially said lawmakers did not want “to let the project proponents and the federal government be the only sources of information on this issue.”

The coal industry’s attempt to restore its flagging fortunes by shipping much more of the fossil fuel to China and India by way of Washington and Oregon is attracting growing objections.

As McClatchy Newspapers reported last week, the industry has dropped proposals for export terminals in Coos Bay, Ore., and Grays Harbor. The surviving four proposals call for coal exports from the Gateway Pacific terminal near Bellingham, the Millennium Bulk Terminals of Longview, the Morrow Pacific Project at Port of Morrow, Ore., and the Port Westward Project at Port of St. Helens, Ore.

Gov. Jay Inslee campaigned on a clean-energy platform and has talked a lot about the economic opportunity in moving away from fossil fuels.

“We cannot seriously take the position in international and national policymaking that we are a leader in controlling greenhouse gas emissions without also examining how we will use and price the world’s largest proven coal reserves,” they said.

The House budget proviso called for the Office of Financial Management to look at the “potential cumulative economic impacts of proposed coal-export projects in the Pacific Northwest.”

It specified that the agency must take into account impacts to transportation infrastructure, economic development opportunities “forgone in favor of coal-export projects,” global carbon emissions, the state’s major economic clusters, and taxpayers.

The Republican-dominated Senate Majority Coalition Caucus was unlikely to go along. It watered down Inslee’s signature bill on climate change, reducing him to the role of non-voting chairman and stripped the legislation of language spelling out Washington’s vulnerability to global warming and acidifying oceans.

Carlyle said that “given Inslee’s deep reluctance” about the coal exports and a regional economic study by Puget Sound Regional Council, that impacts from the export projects will continue to be assessed.