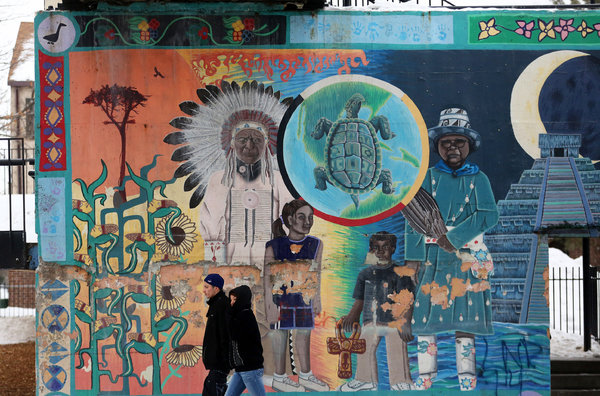 MINNEAPOLIS — Nothing in her upbringing on a remote Indian reservation in northern Minnesota prepared Jean Howard for her introduction to city life during a visit here eight years ago: an outbreak of gunfire, followed by the sight of people scattering.

She watched, confused, before realizing that she should run, too. “I said: ‘I’m not living here. This is crazy,’ ” she recalled.

But not long afterward, Ms. Howard did return, and found a home in Minneapolis. She is part of a continuing and largely unnoticed mass migration of American Indians, whose move to urban centers over the past several decades has fundamentally changed both reservations and cities.

Though they are widely associated with rural life, more than 7 of 10 Indians and Alaska Natives now live in a metropolitan area, according to Census Bureau data released this year, compared with 45 percent in 1970 and 8 percent in 1940.

The trend mirrors the pattern of millions of African-Americans who left the rural South during the Great Migration of the 20th century and moved to cities in the North and West. But while many black migrants found jobs in meatpacking plants, stockyards and automobile factories, American Indians have not had similar success finding work.

“When you look at it as a percentage, the black migration was nothing in comparison to the percentage of Native Americans who have come to urban areas,” said Dr. Philip R. Lee, an assistant secretary for health during the Clinton administration and an emeritus professor of social medicine at the University of California, San Francisco.

Recent budget figures show that federal money has not followed the migration, with only about 1 percent of spending by the Indian Health Service going to urban programs. Cities, with their own budget problems, are also failing to meet their needs.

One effect of the move toward cities has been a proliferation of Native American street gangs, which mimic and sometimes form partnerships with better-established African-American and Latino gangs, according to the F.B.I. and local law enforcement reports. Last month, a federal jury in Minneapolis convicted several members of the Native Mob, a violent gang, of racketeering and other crimes as part of one of the largest gang prosecutions ever undertaken in Indian Country.

The migration goes to the heart of the question of whether the more than 300 reservations in the United States are an imperative or a hindrance to Native Americans, a debate that dates to the 19th century, when the reservation system was created by the federal government.

Citing generational poverty and other shortcomings in reservations, a federal policy from the 1950s to the 1970s pressured Indian populations to move to cities. Though unpopular on reservations, the effort helped prompt the migration, according to those who have moved to cities in recent years and academics who have studied the trend.

Moreover, data show that in a number of metropolitan areas, American Indians have levels of impoverishment that rival some of the nation’s poorest reservations. Denver, Phoenix and Tucson, for instance, have poverty rates for Indians approaching 30 percent. In Chicago, Oklahoma City, Houston and New York — where more Indians live than any other city — about 25 percent live in poverty.

Even worse off are those living in Rapid City, S.D., where the poverty level stands at more than 50 percent, and here in Minneapolis, where more than 45 percent live in poverty.

“Our population has dealt with all these problems in the past,” said Jay Bad Heart Bull, the president and chief operating officer of the Native American Community Development Institute, a social services agency in Minneapolis. “But it’s easier to get lost in the city. It’s easier to disappear.”

Despite the rampant poverty, many view Minneapolis as a symbol of progress. The city’s Indian population, about 2 percent of the total, is more integrated than in most other metropolitan areas, and there are social services and legal and job training programs specifically focused on them.

The city has a Native American City Council member, Robert Lilligren; a Native American state representative, Susan Allen; and a police chief, Janee Harteau, who is part Indian. But city life has brought with it familiar social ills like alcoholism and high unemployment, along with less familiar problems, including racism, heroin use and aggressive street gangs.