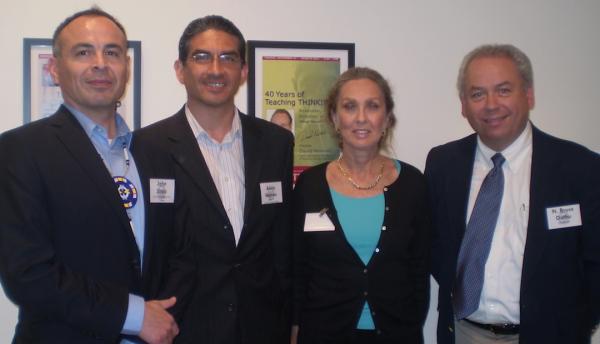 Tanya Lee
John Sirois, chairman of the Colville Business Council for the Confederated Tribes of the Colville Reservation; Alvin Warren from the Harvard Kennedy School; Dedra Buchwald, Washington University professor of epidemiology and medicine, director of the Partnership for Native Health and director of the University of Washington’s Twin Registry; and N. Bruce Duthu spoke at the May 9 Nation Building Symposium.

The complex relationship between American Indian tribes and mainstream universities was the focus of a May 9 Nation Building Symposium sponsored by the Harvard University Native American Program in partnership with the Harvard Project on American Indian Economic Development Honoring Nations Program.

Harvard University and Dartmouth College were established explicitly for the education of Native American and English young men. Dartmouth’s 1769 charter from King George III specified that the college would be created “for the education and instruction of Youth of the Indian Tribes in this Land … and also of English Youth and any others.”

But today, the universities’ relationship with American Indian tribes consists of much more than educating Native students in the tenets of the dominant culture, and much of that complexity is evident in how universities conduct research among American Indian populations.

Gone are the days when researchers could turn up on a reservation without the permission of tribal leaders, say they were doing one type of research and proceed to do something else entirely and publish the results with no regard for privacy or cultural propriety. Tribes increasingly have policies and procedures in place to protect themselves from being exploited in the area of health research, including permits, negotiated goals and procedures, limits on what can be published and designation of who will approve the text of those reports, speakers explained.

“Universities need to go out to tribes to understand what they want on their terms, not turn up with a research plan,” said Dwight Lomayesva, Tribal Learning Community and Educational Exchange at the University of California at Los Angeles. Or, as Norbert Hill, area manager for education and training for the Oneida Nation of Wisconsin, said, “We need help, but on our terms.”

Manley Begay, co-director of the Harvard Project on American Indian Economic Development and faculty at the University of Arizona’s American Indian Studies Program, said, “When we think about universities, we sometimes think first about their sports teams, not about how they could help us. We need to go to them; we don’t have time for them to come to us. We need to say, ‘You’re a land grant college on Indian land—this is what we want—help us do this.’”

What speakers said tribes need help with is building human capacity, the foundation of nation building. Kenny Smoker Jr., head of the Fort Peck Tribes Health Promotion/Disease Prevention Wellness Program, said, “I went to our tribal elders who said we were once a strong nation, caretakers of the Earth. So we are rebuilding a strong nation. For that we need resources,” the vast resources universities have.

“We worked with University of Washington, and asked, ‘What does it take to have a healthy community? The answers were health and welfare, law and justice, education and a viable economy. We need all these working together,” said Smoker.

That means educating American Indian students at both tribal colleges and mainstream institutions such as Harvard, Dartmouth, Arizona State University, the University of Arizona, Berkeley and UCLA, all of which had representatives at the symposium. It means taking responsibility for both matriculating students and graduating them. And it means providing opportunities for them to go home and become reintegrated into their home communities. John Sirois, chairman of the Colville Business Council for the Confederated Tribes of the Colville Reservation, said, “You have to be able to integrate university learning with who you are, who your people are.”

Educating sufficient numbers of Native American professionals across the board to create a critical mass is the next step, and that is where long-term relationships—between universities and tribes and among professionals—make the difference. Speakers stressed again and again that everything depended on building relationships, whether it is obtaining funding for projects, getting research help from universities or creating the trust and dialogue that mean projects will get done in a meaningful way.

Stephen Cornell, co-director of the Harvard Project on American Indian Economic Development and director of the Udall Center for Studies in Public Policy at the University of Arizona said this, “Finding answers, that’s what universities are good at. Then we make [the information] comprehensible and give it to the people who can do something with it.”