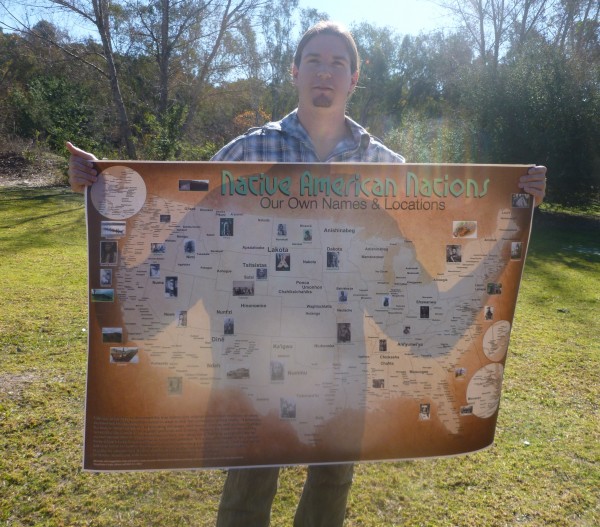 Aaron Carapella, a Cherokee Indian, has taken it upon himself to create a map that shows the Tribal nations of the U.S. prior to European contact. The map is of the contiguous United States and displays the original native tribal names of roughly 595 tribes, and of that, 150 tribes are without descendants. Without descendants means that there is no one known to be alive from that tribe and are believed to be extinct.

After reading the many books on Native tribes and not finding any authentic type maps which failed to accurately represent the hundreds of modern day and historical tribes, Aaron decided to start creating a map for himself that would be authentic and cultural.  “The maps in the books were kind of cheesy, they only had maybe 50 to 100 tribes on them,” said Aaron.

The inspiration for the map to depict original tribal names came from a book that he was reading which explained the real names of tribes and reason they were given the names they have today.

“I didn’t want to make a map with just tribe’s given names on it. I wanted it to be accurate and from a Native perspective,” said Aaron.

The process to collect tribes’ real names led Aaron from books, to making many phone calls to tribes across the country, asking them one seemingly simple question, what is the actual native name of your tribe?

“Some tribes, once contacted, wouldn’t know that information,” he said, but they would get him in contact with an elder or someone that would have the information he needed. “Every tribe I’ve contacted, I’ve noticed they are really good about getting back to you about cultural questions, they had a really good response time,” said Aaron.

On the map there are approximately 175 merged tribes, listed among the 595. The map displays   what others fall short of, to make known the significant fact that is overlooked every day and that is, that tribes inhabited the entire U.S. and not just small portions of it.

“It is kind of sad that I can’t find a tribe’s real name because they aren’t here anymore,” said Aaron about learning the truth of what happened to many tribes. Some tribes were victims of genocide, some dwindled away from disease or other life threatening situations and some were merged forcefully or willingly with other tribes to make one large tribe. “Today some small tribes are enumerated under larger tribes, and do not have separate sovereignty. A good example of that is the Delaware Tribe of Oklahoma who recently split from the Cherokee Nation,” said Aaron explaining about how some tribes have merged.

“To be honest, in general in the United states, Americans are very ignorant about Native American history and the only time they deal with Native history or reality is when tribes have enough money to fight back against injustice happening to them. In my small way, making this map is to reinforce the true history of the injustice and the genocide that occurred,” Said Aaron.

Aaron has not received any funding to create the map and any profit from the map sales will go towards Aaron’s future map projects, which will include an in-depth look at the tribes of the states of California and Washington. A map of the First Nations in Canada is already in the works and close to being complete.

The Native American Nations map can be purchased from his website and prices range from $89 to $199. For more information or to purchase a map visit http://aaron-carapella.squarespace.com/. Aaron can be reached through email at tribalnationsmap@gmail.com and by phone at 949-415-4981.