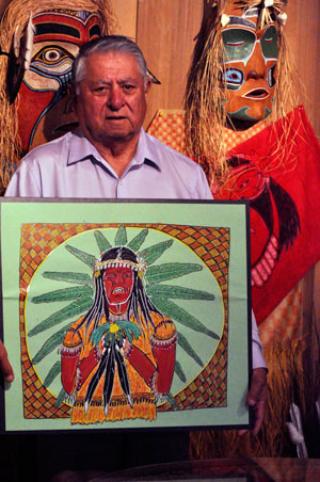 Lauren Salcedo
Herman Williams Sr. has been selected to be the Strawberry Festival Grand Marshal.

By Lauren Salcedo, The Marysville Globe

MARYSVILLE — Herman Williams Sr. is a former Tulalip Tribal Chair, Marysville School Board Director, Marysville High School ASB President and football quarterback. He is an artist, painter, musician, fisherman and storyteller. And now, he is adding one more title to his list of influence in the Marysville and Tulalip areas — Strawberry Festival Grand Marshal.

“Herman has been influential in Tulalip and Marysville for many years,” said Carol Kapua, of the Strawberry Festival. “Being one of the leaders of the Tribes, he has been instrumental in getting the Tribes to where they are today, especially in the business world.”

Since retiring in 1980, Williams has continued to focus on art, and uses paintings, stories and songs to honor the history of the Tribes.

“What I’m doing is trying to go back and depict the life of my ancestors,” said Williams. “I want to really show the life they had, and how they went through the trauma of people telling them they couldn’t sing their songs or tell their stories.”

When Williams found out about the selection as Grand Marshal, he thought it was a joke. When Kapua told him that he really was going to be Grand Marshal he was surprised and touched.

“It’s really rather an honor,” he said.

Willams will be in the Strawberry Festival Grand Parade on Saturday, June 15, and jokes that he will have to perfect his waving skills.