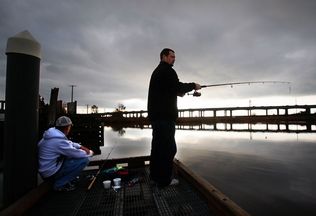 Dan Bates / Herald file photo, 2009
Rob Fuller (left) and Andrew Eaton, both of Marysville, cast for sturgeon from the dock at Ebey Waterfront Park in Marysville in October 2009. Marysville has received a federal grant to help fund cleanup near the park.

Marysville is one of eight communities in the region receiving a grant from the federal Environmental Protection Agency to assist with the Ebey waterfront marina land cleanup.

The $200,000 cleanup grant would be used to remediate the contaminated ground on the city-owned marina property at 1326 First St., just west of Ebey Waterfront Park.

The marina property contains waterfront chemicals and pollutants common to timber industry and marine operations that have existed since the late 1800s. Grant funds also will be used to conduct groundwater monitoring and support community involvement activities.

The grants help revitalize former industrial sites, turning them from problem properties to productive community use.

The EPA previously awarded the city a grant in May 2009 to clean up the Crown Pacific mill site at 60 State Ave. on the waterfront just east of State Avenue. The grant will be issued on Oct. 1, but hiring a consultant to develop a cleanup plan that meets approval of the state Department of Ecology and the EPA means that it could be 2015 before actual work starts, city officials said.

Long-term plans as identified in the city’s 2009 Downtown Master Plan would see Ebey waterfront redeveloped with trails, apartments or condominiums and some commercial development.

No specific plans have been decided for the marina site.