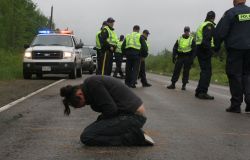 ELSIPOGTOG, NEW BRUNSWICK, CANADA – About 25 RCMP officers in uniform, along with about a dozen police cruisers, today continued to flank equipment owned by gas exploration company SWN Resources Canada as they proceeded with their seismic testing of highway 126 in Kent County, New Brunswick.

Pushing the scattered crowd of Indigenous and non-Indigenous people back “50 metres distance” from the southward approaching seismic trucks – or ‘thumpers’ – the RCMP first arrested one demonstrator and chased another into the woods before arresting Susanne Patles.

Patles, a Mi’kmaq woman, had scattered a line of tobacco between herself and the approaching police, then proceeded to draw a circle of tobacco in the highway, where she then knelt and began to pray. After about two minutes, the police proceeded to arrest Patles. An officer Bernard noted that she was being charged with mischief.

Today’s two arrests follow another three made last Wednesday, when people again placed themselves in the path of SWN’s thumpers. Residents fear that the tests will lead to hydraulic fracturing – or fracking – of the area.

Lorraine Clair, arrested on Wednesday, continues to recover from nerve damage suffered from the rough treatment handed down on her by RCMP officers. 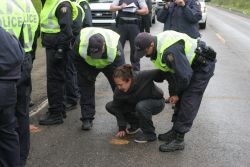 Resistance to SWN’s presence, which is located in a part of traditional Mi’kma’ki territory known as Signigtog – or district 6 – has so far been strong. Thumper trucks have for days now been met with people who object to fracking from the surrounding communities, as well as supporters from around the Maritimes who are now beginning to flock towards the focal point of the highway.