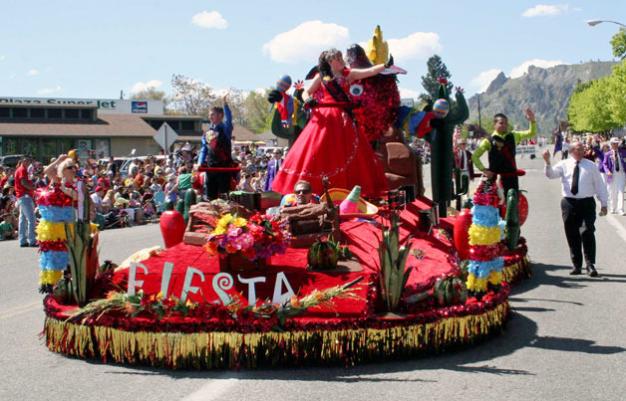 Courtesy Photo
The Marysville Strawberry Festival Royalty and float appeared in the Wenatchee Apple Blossom Festival in May.

MARYSVILLE — Before the Marysville Strawberry Festival’s Royalty and float put in appearances at the Saturday night Grand Parade on June 15, they’ll have already put in at least two months of travel time throughout the state of Washington, as well as a trip up north to Canada.

Darren Doty, co-vice president elect of the Maryfest Board of Directors, also serves as one of the parade float’s two main drivers, along with a supplementary third driver, and he estimated that the float crew will have logged approximately 1,000 miles on the road prior to cruising down State Avenue for the Strawberry Festival Grand Parade.

“We started on April 13 with the Daffodil Festival Parade,” Doty said. “What was unique about that day was that we had to participate in four different parades in one day — in Tacoma, Puyallup, Sumner and Orting — so rather than transporting our float in the trailer, like we do even when we do the West Seattle and Olympia parades on the same day in July, we were escorted as we drove the float down the highway between towns.”

Tacoma is actually the nearest of the festivals that the Royalty and float crew have attended so far this year, with locations such as Sequim, Wenatchee and New Westminster in Canada representing some of the furthest distances they’ve gone afield.

“Of course, we’ll be hitting Arlington and Tulalip later on,” said Doty, who’s learned to negotiate the challenges of navigating a large truck and trailer, and an even larger float once it’s unloaded and assembled, through some towns with some relatively narrow streets. “Even when I find a parking spot for the truck, I have to make sure I’ve got at least 50 feet behind me to get the float out, and even when I’m driving the float down the street for parades, I could still be sharing the road with other moving or parked cars.”

Without a speedometer, or any feasible side- or rear-view mirrors, Doty relies on spotters who walk alongside the float to guide his path, especially when his clearance on either side of the float has been as little as a few inches. An equally taxing aspect of participating in months of parades, that both Doty and Maryfest Board member Carol Kapua deal with, is the amount of prep time required for each of the Saturdays’ festivals.

“Let’s say a parade starts at the typical time of 11 a.m.,” Doty said. “That means we need to get ready at 4:30 a.m. to leave around 6 a.m., so that we can get to our destination in time for the judging between 8:30-9 a.m. From there, it’s a couple of hours of waiting around. We joke that our schedule is ‘Hurry up and wait,’” he laughed. “Even if the parade starts at 11 a.m., though, that still means we probably won’t start until 11:30 a.m., or possibly even noon if we’re slated to go later in the parade. And yet, it’s always fun.”

The Strawberry Festival Royalty take the time prior to the parades to meet with the Royalty from the organizations hosting them as part of those festivals. Depending on how far away they are from Marysville, they could be accompanied by a skeleton crew of a chaperone, a float driver and a couple of crew members to unpack and repack the float at the more distant festivities, or as many as a couple of dozen folks for parades as near as West Seattle, where the Strawberry Festival crew prepares barbecue meals for their cohorts.

“We keep traveling until the first week in October, when we hit Issaquah,” Kapua said. “Of course, our last parade of the year is Merrysville for the Holidays, after which we’ll tear down this year’s float, but by that point, we’ll already have paperwork started for next year’s Strawberry Festival. It really is a year-round process.”

In spite of her own demanding collateral duty of making sure that everyone has meals packed for parade days to suit their dietary requirements, Kapua still expresses enthusiasm for taking part in nearly a full year of festivities.

“For me, it’s being able to look at the little kids’ faces, as they point to the float and dance along with the music,” Kapua said. “They don’t have any inhibitions in how they react.”

Although the Strawberry Festival’s Talent Show already took place on Tuesday, June 11, its Talent Show kicks off at 6:30 p.m. in the Marysville-Pilchuck High School auditorium on Thursday, June 13. Saturday, June 15, sees the Berry Run at Smokey Point Plant Farm at 8:30 a.m., the Rose-Planting Ceremony at Totem Middle School at 10 a.m., the Kiddies Parade on State Avenue at 6 p.m., the Grand Parade on State Avenue at 7:45 p.m. and the fireworks show at Public Works at 10 p.m.

For a complete listing of activities, go to www.maryfest.org.