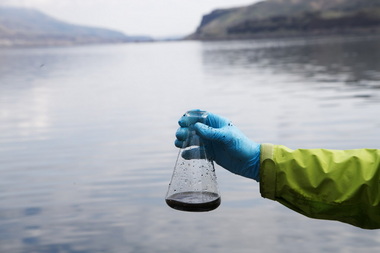 The Sierra Club and other environmental groups sued BNSF railway and coal companies in federal court today, charging that they pollute the Columbia River and other water bodies with coal dust from uncovered coal trains. This water sample from the Columbia is an example of it, they say.Motoya Nakamura/The Oreognian

The Sierra Club and other environmental groups sued BNSF railway and coal companies in federal court Wednesday, charging that they pollute the Columbia River and other water bodies with coal dust from uncovered coal trains.

It’s the first lawsuit filed in the Northwest’s coal export controversy. Developers are pursuing three train-fed export terminals to ship Montana and Wyoming coal to Asia, two in Washington and one in Boardman at the Port of Morrow.

The lawsuit focuses on pollution from roughly four uncovered coal train trips a day through Washington’s side of the gorge to a coal-fired power plant in Centralia and export terminals in British Columbia.

Approval of the Northwest export terminals could add about 20 train trips a day and increase water pollution, the environmental groups charge. They want a federal judge to require Clean Water Act permits for the uncovered, mile-plus trains.

In statements, BNSF, union backers and the trade group representing coal companies and others pursuing Northwest coal export called the lawsuit frivolous and said it threatened to delay the export projects and jeopardize the jobs that go with them.

The lawsuit is “nothing more than a publicity stunt meant to stop the permitting of multi-commodity export terminals,” the company said.

The Sierra Club had a laboratory test debris in several places including alongside the tracks and the Columbia River, and the lab found it was coal, the suit says.

BNSF has estimated about 500 pounds of coal blowing off a single open car, the environmental groups note. But terminal and rail officials say most of the dust is lost near the mines, and the railroads are taking steps to limit dust, which can undermine track ballast and derail trains.

BNSF officials say the company has clamped down on coal dust from the trains in recent years, spraying sticky surfactants to keep dust down and having mines load coal in a “bread loaf” shape that reduces coal dust losses.

With U.S. demand flagging, coal terminal developers want to ramp up exports, carting in Montana and Wyoming coal on mile-plus, uncovered coal trains. The terminals could bring hundreds of millions in investment and hundreds of jobs, they say.

The suit was filed in U.S. District Court for the Western District of Washington in Seattle.