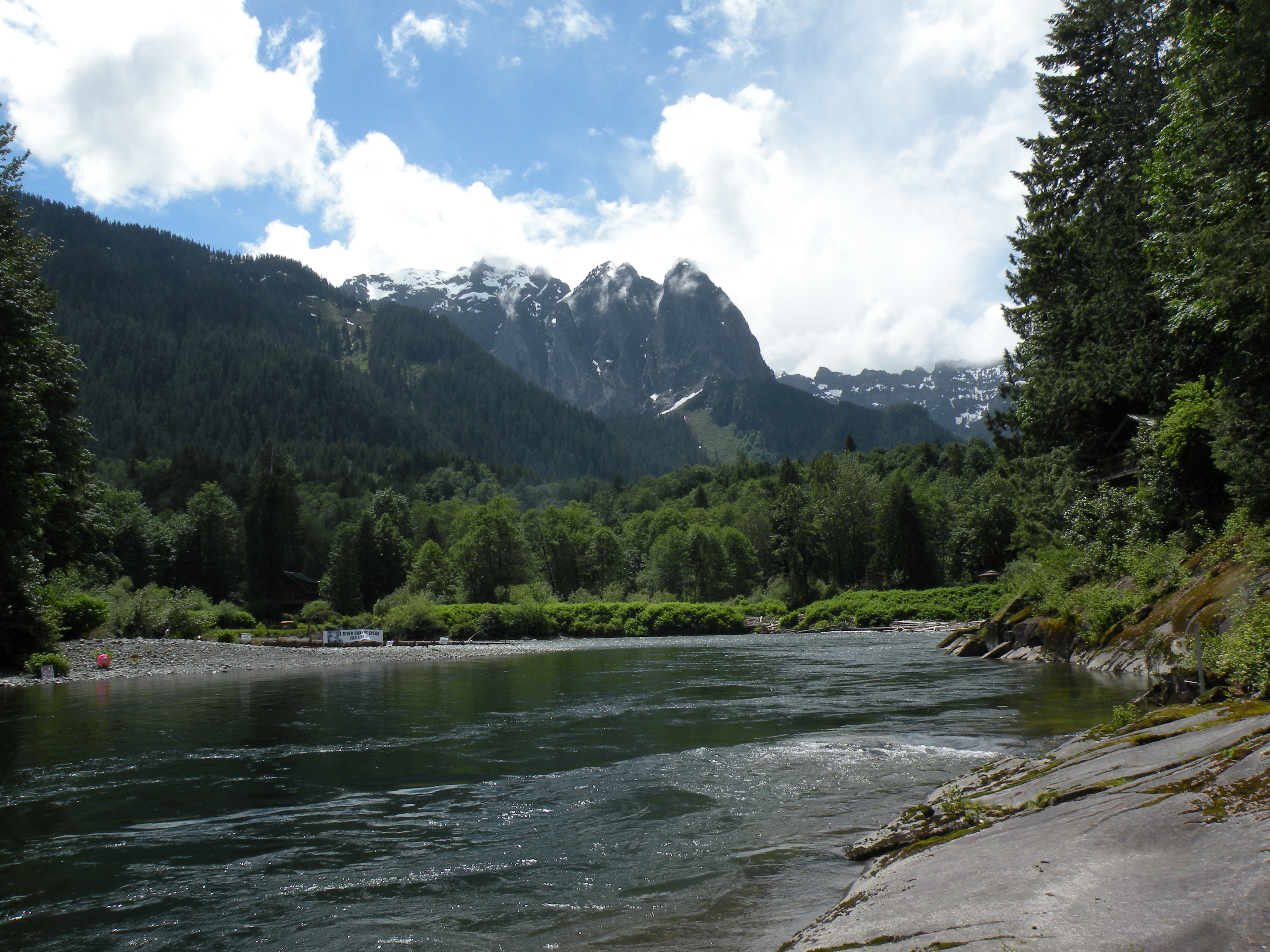 Snohomish County PUD wants to install a small, inflatable dam at this bend on the south fork of the Skykomish River.
Bellamy Pailthorp / KPLU News

At a time when Washington state has been making headlines for the largest dam removal project ever on the Elwah River, Snohomish County is proposing a new one.

But the location of the proposed dam—on a wild and scenic stretch of the Skykomish River near the small town of Index—has many locals banding together against the project. 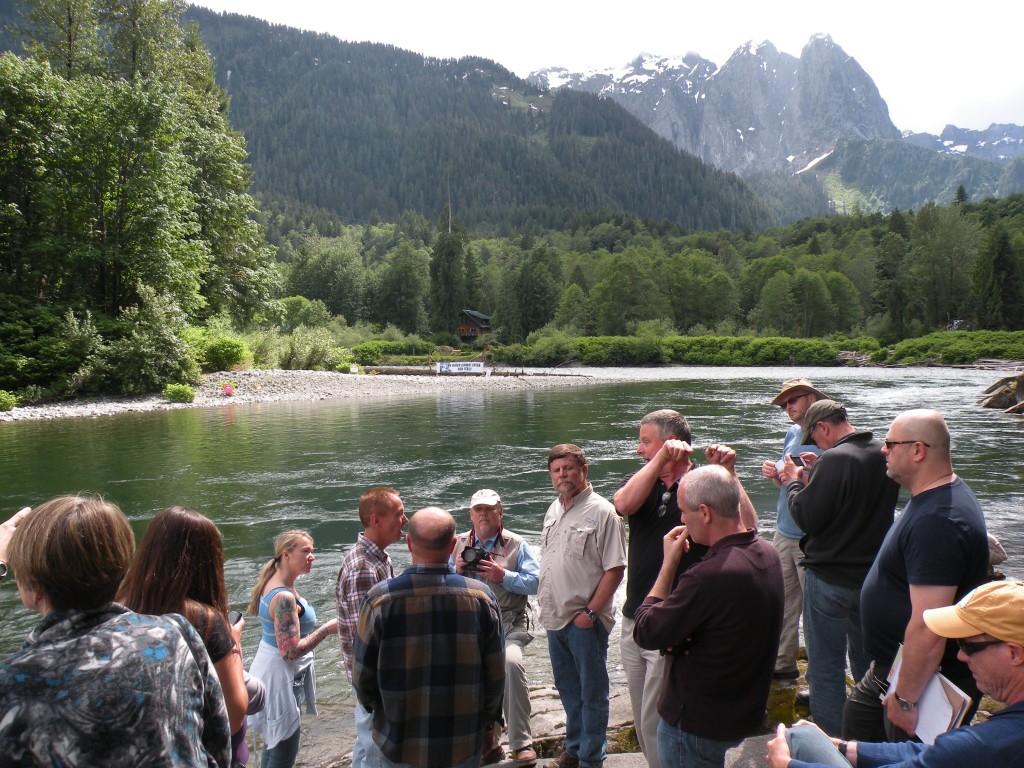 Jeff Smith (center, in tan shirt) welcomed a public tour by FERC and the PUD at his property, which borders on the proposed dam site.
Bellamy Pailthorp / KPLU News

Driving east on Highway 2, evidence of the brewing controversy near Index is hard to miss. Printed signs and hand-painted placards line the roads, calling on the PUD not to dam the Skykomish.

“Did you see our address sign that says ‘no dam way?’” asks homeowner Jeff Smith with a laugh.

Smith is trying to maintain his sense of humor about it all. His riverfront property sits right on the edge of the proposed dam site.

For decades, Smith’s family has enjoyed communing with nature on the shore of the Skykomish as the river rushes by. To the west, the craggy peak of Mount Index looms, to south and east are peaks in the Wild Sky and Alpine Lakes Wilderness areas.

“A lot of people call this truly one of the most spectacular places in the country,” Smith said. “And of course, we believe it’s an inappropriate place to put an industrial project that puts a yoke on a wild and scenic river. And we think it should be allowed to stay free.” 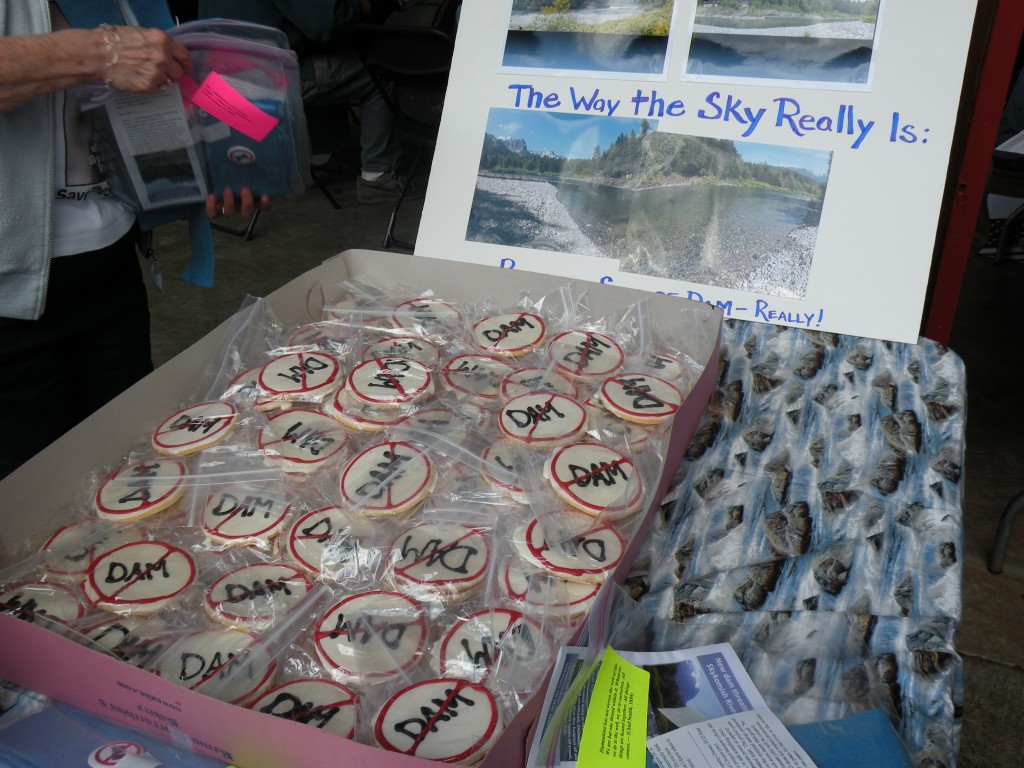 A powerhouse would be built to the left of Sunset falls, shown here. PUD says they would not be de-watered, just diminished as with hydro at Snoqualmie or Niagra Falls.

The Skykomish is one of only four rivers in Washington that has earned the wild and scenic designation, which is meant to discourage development.

But the Snohomish PUD has obtained the preliminary permit to put in an inflatable dam on the river. The idea is the dam would take advantage of the water’s power as it flows toward two sets of dramatic waterfalls.

The utility recently toured the site with the Federal Energy Regulatory Commission as part of its first scoping meeting. The commission will determine what kinds of environmental studies will be required for the licensing process.

Snohomish PUD Assistant General Manager Kim Moore pointed across the river, explaining to FERC and the public exactly how the inflatable structure made of steel and rubber would work.

“This is a big inner tube, which has compressed air that allows us to lower or raise it to keep the river at a steady height. Right now, with this kind of flow, probably it would be all deflated,” Moore told the tour.

Moore said the dam would lie flat about a third of the year, not producing power at those times. And there would always be some water flowing over the dam; it would adjust with the strength of the river to keep water levels safe for endangered fish and minimize its environmental impacts.

The dam would provide power for about 10,000 homes—or about 1 percent of the utility’s demand—at a cost of up to $170 million.

“So this prevents a natural gas plant or coal plant, you know, because we’re still growing,” he said. “The county’s growing, we’re adding people and there’s a need for additional energy.”

Those arguments haven’t stopped the opposition.

More than a hundred people squeezed into the Index Fire House for the evening scoping meeting. And of the nearly three dozen people commenting, only one man spoke in favor of the dam. The man said the dam could reduce flooding and improve roads in the area.

But the rest of the commenters did not agree. Along with local residents, representatives of groups including the Sierra Club and the League of Women Voters joined the chorus of dissenters. Also testifying was Tom O’Keefe, Pacific Northwest Stewardship Director with American Whitewater.

“I have tremendous respect for my colleagues here at the PUD. I have worked with these folks for over a decade, ” O’Keefe said. “But sometimes your friends make mistakes. And this project is simply inappropriate in our view.”

FERC is taking comments on the plan for the proposed Skykomish River dam proposal through July 19. The final decision on the license is expected to take about five years.